This site uses cookies
By using this website you agree to the use of cookies in accordance with the current browser settings.
Learn more Accept
Go to main content
COVID-19 security status
Level 0: no restrictions, basic health and safety at work rules
Coronavirus Statistics
home link “No Limits” | New York. A wounded city

The fifth issue of the journal has been prepared in cooperation with the Transform4Europe European university. Today we present a text by Ac. Prof. Jonas Nesselhauf and Janina Willrich from Saarland University.

The area of New York City destroyed by the terrorist attacks on September 11th, 2001, now referred to as Ground Zero, continues a process that goes back to the earliest traces of human civilizational activity. Here you can trace, layer by layer, the historical changes that have taken place in the area, and new buildings continue to emerge on the debris of the past. 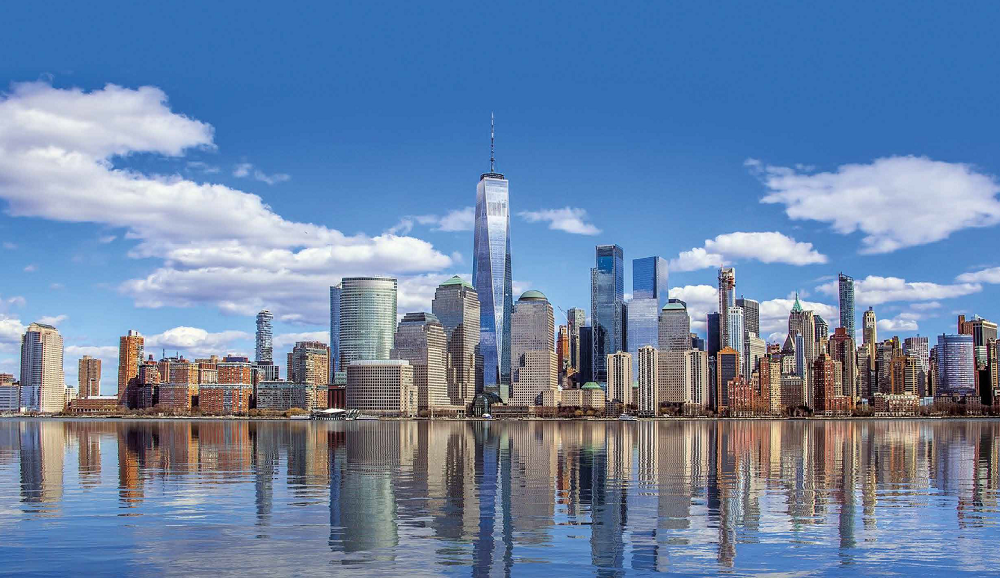 During one of the many walks through New York City, that took the flaneur protagonist of Teju Cole’s novel Open City (2011) to the construction site of the One World Trade Center, he reflects on the image of Manhattan one decade after the devastating attacks of September 11th, 2001: “This was not the first erasure on the site. […] The site was a palimpsest, written, erased, rewritten. There had been communities here before Columbus ever set sail, before Verrazano anchored his ships in the narrows, or the black Portuguese slave trader Esteban Gomez sailed up the Hudson River. Human beings had lived here, built homes, and quarreled with their neighbors long before the Dutch ever saw a business opportunity in the rich furs and timber of the island and its calm bay.”

In this context, the city is not only “open” (i.e., militarily undefended) because of the fact that New York as a metropolis symbolizes the capital of the free world, but also because its urban space is always evolving. The destroyed site, now referred to as Ground Zero, thus continues a process that goes back to the earliest traces of human civilizational activity. You can trace in it, layer by layer, the historical changes that have taken place in the area, and new buildings continue to emerge on the debris of the past. And even after Manhattan was (metaphorically) wounded in September of 2001, the debris and human remains will inevitably become part of the city’s history – only their social and political treatment is yet to be agreed upon

As part of our exhibition in Saarbrücken, we took a closer look at the challenges and problems that had to be dealt with in the immediate aftermath of the attacks. An area of approximately 700,000 square feet was completely destroyed. It once was one of the most valuable building sites in the entire city, and then as Ground Zero it turned into a sacred, emotionally charged place for grieving families and friends. It thus quickly became apparent that the World Trade Center could not simply be rebuilt in the same spot, and also that there was a genuine need for a permanent place of remembrance as well as public involvement in the redevelopment of the area.

Along with the promise of an inclusive and transparent planning process, the newly formed Lower Manhattan Development Corporation (LMDC) was tasked with reconciling these two needs, which sometimes proved difficult. For instance, the Corporation gave stakeholders the opportunity to participate in redesigning the site, but this was ultimately limited to a few presentations and discussions, and final decisions were made almost exclusively by the LMDC. Both the 2002 decision on Daniel Libeskind’s Freedom Tower proposal and the subsequent redesign by architect David Childs were made without input from the broader public. The One World Trade Center, which was finally completed in late 2014 and early 2015 and was 1,776 feet tall (as a reference to the year 1776 when the Declaration of Independence was signed), was intended both to create as much rentable office space as possible and to replace the Twin Towers with a new landmark at the southern tip of Manhattan.

Similarly, LMDC set the general design guidelines at the beginning of the design process for the National September 11 Memorial & Museum. Only after a thirteen-member committee made a preliminary selection from the 5,201 proposals received were survivors and family members of the victims given the opportunity to provide their feedback. In 2003, the jury selected eight designs for further discussion, after which Michael Arad and Peter Walker’s Reflecting Absence was selected as the winning entry. Their design included twin waterfall pools with water cascading down from a height of approximately 30 feet into reflecting pools, marking the original location of the Twin Towers, surrounded by walls which displayed the names of nearly 3,000 victims, all set within a plaza with more than 400 swamp white oak trees. The LMDC then also presented its plans for the design of the Memorial Center, which was to be located below the plaza. The underground museum, which opened in 2014, not only houses thousands of artifacts and photographs, but also displays the original slurry wall of the World Trade Center. In this way, the “wound” in the urban space was architecturally exposed, and the ruins of the past were overwritten like a palimpsest.

Today, two decades after the September 11 attacks, Lower Manhattan is a new and diverse urban space. At the same time, it is also a place of mourning and remembrance as well as the economic center of the United States (of which the luxury shopping mall in the new Oculus building is perhaps the most impressive symbol). Meanwhile, downtown New York has become a truly urban space for another reason as well. After all, the plaza around the new skyscraper, museum, and pools has been heavily shaped by an ever-present security architecture, including surveillance cameras and steel bollards.