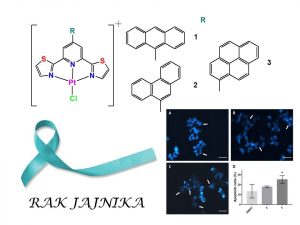 Cancer rank second as the leading causes of premature death worldwide, behind cardiovascular diseases. In a view of the constantly growing number of diagnosed cases, it can be assumed that this statistical tendency will be changed in a short time, and cancer diseases may become the most common cause of death. This is a serious civilization challenge, and thus both new diagnostic methods and more effective therapies are strongly desirable and constantly developed. A particular attention is paid to ovarian cancer, referred as the „silent killer of women”. In contrast to many other cancer diseases (like cervical cancer or breast cancer), there are no screening tests for ovarian cancer, as well as its symptoms appear in the late stages, when it penetrates the surrounding tissues and tumor angiogenesis is observed. Most ovarian cancer chemotherapy regimens are based on the combination of platinum-based drugs (cisplatin or carboplatin) with taxoids (such as paclitaxel). The main disadvantage of these treatment methods is the appearance of drug resistance, and consequently, insensitivity of cancer cells to cisplatin derivatives.

Designed and prepared by the Team of Physicochemistry of Transition Metal Compounds, platinum(II) coordination compounds with 2,6-bis(thiazol-2-yl)pyridines substituted with aryls (phenanthrene, anthracene or pyrene) may be a promising alternative to cisplatin and its direct analogues. They show IC50 values comparable to cisplatin (3.9 µM) against A2780 cell lines (2.9 – 4.4 µM), and the loss of A2780 cell viability is due to a combination of an apoptotic cell death mechanism via mitochondria and autophagic cell death. The unique advantage of the obtained Pt(II) compounds is their high selectivity – they are characterized by low cytotoxicity in relation to other cancer lines (HTC116 (colon cancer), MCF7 (breast cancer), PC3 (prostate cancer)) as well as to healthy human fibroblasts.