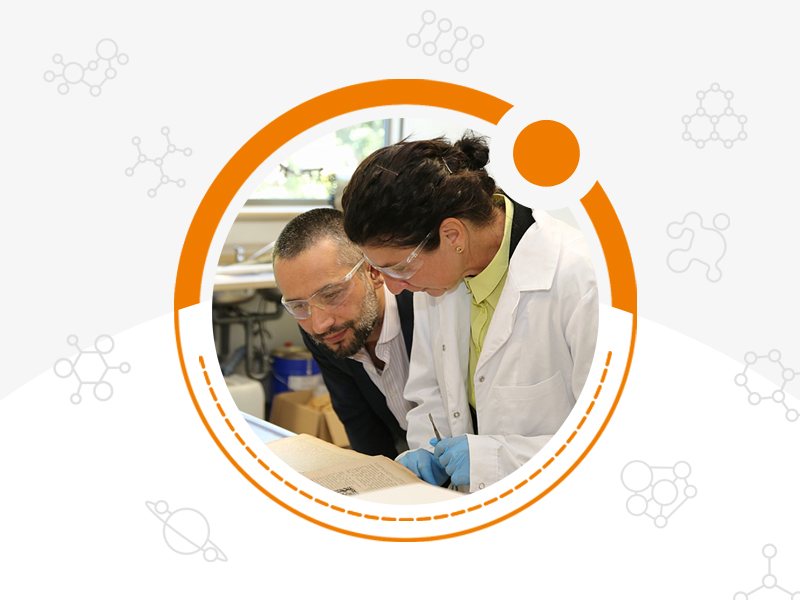 The very first thing many book lovers do after opening a book is to take in the smell emanating from between the pages. This is a peculiar test of a book, which should smell a certain way. Its future fate may depend on this because it is the smell that can either encourage or discourage reading – regardless of the content. What does a book smell like? How should we take care of it so that it accompanies us for a long time – we asked Professor Robert Musioł from the Institute of Chemistry and Agnieszka Bangrowska, PhD, from the Institute of Cultural Sciences. 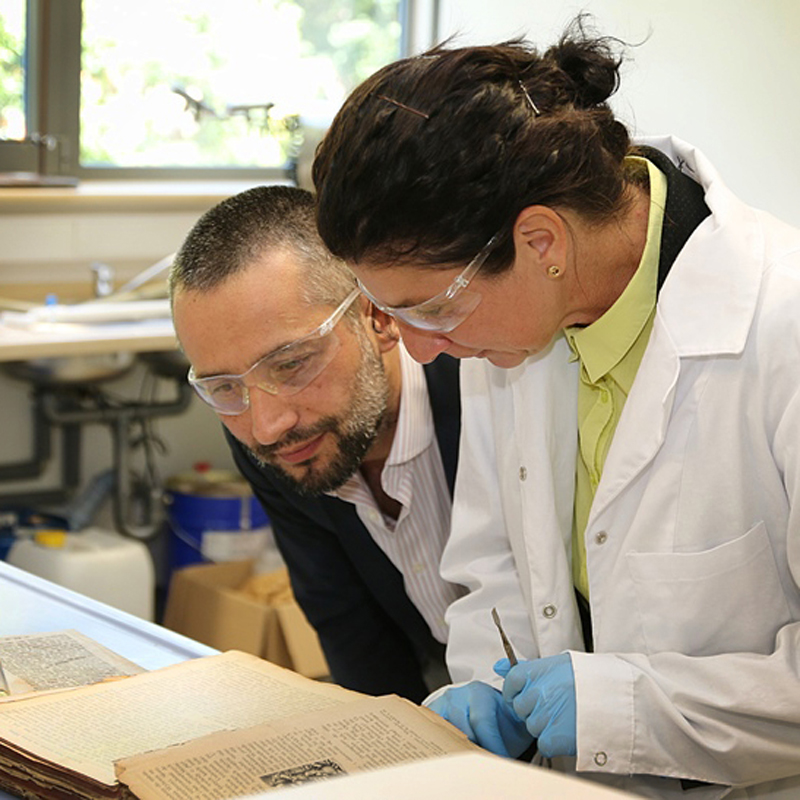 show publications
Science | My Passion
Save the Date – Valentine’s Day

Books in need of rescue

I find television very educating. Every time somebody turns on the set I go into the other room and read a book ― Julius Henry, better known as Groucho, one of the Marx brothers.

Today, in the age of the Internet, we are slowly beginning to forget how much joy there is in discovering the world slowly and painstakingly, but on one’s own; through a book where nothing is given “ready-made” together with an interpretation and a hint as to when to laugh. Although only one in three Poles admits to reading at least one book a year, more than twice as many say they have books in their home. It can therefore be concluded that we consider contact with literature more important than participating in parliamentary elections. Undoubtedly, cultural heritage is an important component of human life and activity. It represents the material and spiritual heritage of previous generations and also bears testimony to our lives. Collecting national heritage, preserving it for future generations, and making it widely available is the responsibility of institutions set up to preserve cultural resources, such as libraries. However, we all also have a responsibility in this matter. It is interesting that despite the growing popularity of electronic media, the vast majority of books in our home collections are made on traditional paper. The book as we know it today originates from the codex, i.e. sheets of paper bound together with a spine, which replaced the previous form of a document, the scroll, as the parchment became grew in popularity. In Polish literature, old prints are considered to be publications issued up to and including the year 1800, while publications issued from the invention of printing up to 1501 are referred to as incunabula. However, the oldest books, scrolls and other writing materials that we know of were created much earlier. For example, the Diamond Sutra, a Buddhist religious book, was created in 868 as a five-metre-long scroll reproduced using wooden matrices. Etruscan books made from gold plates were more than two thousand years old. Only the durability of such a peculiar publishing material has allowed the book to be preserved until our time. Much more common are paper books, which are less resistant to the effects of time and external factors. Although today’s paper differs significantly from its prototype invented in China around 105 AD, it is still made from plant fibres, mainly cellulose. In addition, paper also contains fillers, adhesives, and dyes to improve colour, smoothness or resistance to tears. In the past, these additives were of natural origins, such as animal or fish glue or alum. Unfortunately, all of these substances are very sensitive to moisture, temperature, and especially the damaging effects of bacteria and fungi. In addition to natural ageing, the condition of the paper, its appearance and properties are affected by various physicochemical, biological, and mechanical factors.

Most old prints are exposed to or have already been infected by micro-organisms. The same applies to some extent to the newer books stored in our homes. One could say that books can become ill just like humans, and just like human patients, we can cure them with the right medicines. The greatest threat to the library and archive materials is posed by micro-organisms – primarily fungi known as “moulds”, and less commonly bacteria. These micro-organisms are found almost everywhere in our environment. Their small size and simple structure allow them to spread through the air, grow on the surface of paper, and multiply. Fungi first attack the natural adhesives used in paper production and then decompose the cellulose fibres. The result is a sheet of paper that is yellowed, stained, and discoloured, has a characteristic odour and crumbles under the lightest touch. In extreme cases, microorganisms can completely destroy the work. We should also keep in mind the fact that for us, being surrounded by infected books does not involve only the pleasure of being in contact with knowledge and literature. Airborne micro-organisms settle on the skin, enter the eyes and lungs, cause irritation and allergies and can develop into serious, life-threatening infections. It is estimated that half of all museum or library staff suffer from coughs, hay fever, or eye irritation. Nail fungus, internal eye, and lung infections can be particularly dangerous. Thus, proper conservation treatments not only preserve ancient works for future generations but allow them to be enjoyed safely. An important part of such treatments is the use of antifungal and antibacterial agents. However, close contact with antique books places special demands on historians and conservators. Although paper is obtained from cellulose, many of the agents commonly used to protect wood are completely unsuitable for book conservation. To understand this, it suffices to imagine the characteristically scented wooden railway sleepers or construction wood with green stains. The use of similar agents would irreversibly destroy any old piece of literature. Many of the agents useful in protecting against micro-organisms are also harmful to humans. There are flammable, explosive, and narcotic agents, some of which can even cause cancer. The use of such substances proves difficult, and books protected with them become dangerous to the environment. The remedy must be tailored to the patient also when that patient is a book, which is why art conservators have tasked scientists with developing new, effective, and safe bactericidal and fungicidal agents for historical books. In the laboratories of the University of Silesia, the joint work of chemists, pharmacologists, and historians is directed at finding agents which simultaneously strengthen the old paper and protect it against microbes. Using the design methods of modern medicines, it is possible to obtain strong yet safe substances that match the properties of ancient paper and save many ancient works.

Certainly, cyber geeks and other proponents of modern solutions may ask, “Why go to such lengths?”. In an age of widespread digitisation, cloud-based knowledge available on demand, and artificial intelligence, is there really anything to fight for? If these books can be scanned? Certainly, universal access to the content of great works, even if they exist in single copies, is a great achievement of our time. However, historical works are not just about content. These are not books to be read when travelling, bought at a kiosk in a train station or airport, and printed on paper so biodegradable that it falls apart during reading. Pieces of literary heritage are also the material they are made of using ancient and often now forgotten techniques, laborious hand embellishments, and the use of expensive metals and fabrics. Being able to admire such a work of art up close is a unique experience that allows one to understand better the necessity of preserving art for future generations.

Agnieszka Bangrowska, PhD and Prof. Robert Musioł are the authors of the patent – Fungicides for book collections. Patent for saving the world’s cultural heritage