This site uses cookies
By using this website you agree to the use of cookies in accordance with the current browser settings.
Learn more Accept
Go to main content
COVID-19 security status
Level 0: no restrictions, basic health and safety at work rules
Coronavirus Statistics
home link Type information Physicists from the University of Silesia in „Journal of Materials Chemistry C”

The September issue of „Journal of Materials Chemistry C” (impact factor 6,641) contains an article entitled „Weak ferromagnetic response in PbZr1-xTixO3 single crystals” written by employees of the University of Silesia in Katowice and Military University of Technology in Warsaw. The article describes the magnetic properties of crystals of solid solution PbZr1-xTixO3(PZT) which were described for the first time. These solutions are mainly known for their very good piezoelectric properties. They are applied in the automotive industry, electronics, medicine, sport and advanced science and research equipment. The experimental research described in the article confirmed the ability of defects in oxygen perovskites to generate ferromagnetism, which had been foreseen in the theoretical considerations.

The article was also announced on the cover of the prestigious journal together with a photo referring to the structure of perovskite ABO3, with two loops instead of atom B (Ti or Zr) inside the oxygen octahedra: bigger – describing the ferroelectric properties and smaller – corresponding to poor ferromagnetic properties.

The discovery of magnetic properties in PZT ferroelectric solution can be called breakthrough, because it allows to regard PZT solid solutions as multiferroics. Multiferroic properties combined with very good piezoelectric properties make PZT solutions even more attractive than before in terms of their practical application. 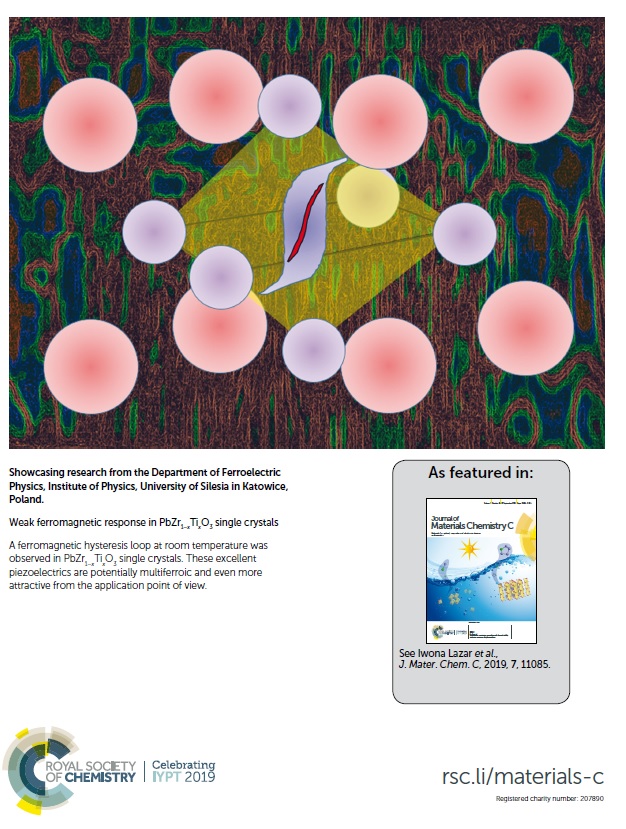