This site uses cookies
By using this website you agree to the use of cookies in accordance with the current browser settings.
Learn more Accept
Go to main content
COVID-19 security status
Level 0: no restrictions, basic health and safety at work rules
Coronavirus Statistics
home link Type articles Assimilation of Jews in the 19th Century, or What Eliza Orzeszkowa Didn’t Know

Assimilation of Jews in the 19th Century, or What Eliza Orzeszkowa Didn’t Know

19th century is the history of Poles as a nation without a state. It was also the time when the Polish national identity was formed. The situation back then was very special for the Jews, who comprised 10 per cent of the overall population in Poland prior to the Partitions.

Prof. Magdalena Piekara, a literary historian from the Institute of Literary Studies (Faculty of Humanities) at the University of Silesia has specialised in the Jewish question in the 19th century for many years, although she admits that she took up this subject nearly by accident. At the beginning of her scientific career, the researcher’s primary interest was the literature of Polish social realism (Bohater powieści socrealistycznej, 2001; Śląski socrealizm. Władza – literatura – rzeczywistość, 2012). The issues related to the assimilation of Jews during the positivism appeared on the basis of the conducted classes. The effect of her interest was the habilitation thesis entitled ‘Kwestia żydowska w prozie Elizy Orzeszkowej’ (Jewish Question in the Prose by Eliza Orzeszkowa) (2013). Although the professor did not give up her initial scientific fascinations, she assures that her ‘difficult friendship’ with the social realist literature will end after writing ‘Widokówki socrealistyczne’, which will be published this year.

‘When I was writing my habilitation thesis, I realised that Orzeszkowa had represented a perspective which was very modern for her times, but at the same time built a relatively one-sided vision of Polishness. For example, this extremely well-read writer never refers to the theme of the Haskalah – the movement which aimed to make every Jew a good citizen of the country where they lived. Although this way of thinking was born in Germany at the end of the 18th century, it was also very strong in the Polish soil. So why did the author of ‘O Żydach i kwestyi żydowskiej’ (On Jews and Jewish Question) never mention it? What shaped her knowledge, what materials and information did she have access to?

For a researcher, the arising of questions and doubts becomes a challenge and marks the beginning of detailed inquiries. This is how the project entitled ‘Żydzi w XIX wieku na podstawie czasopiśmiennictwa’ (Jews in the 19th century periodicals) was started. In 2005, the bibliography of Jewish periodicals by Dr. Alina Cała, specialist in the field of Polish-Jewish relations in the 19th and 20th century, was published. It is great auxiliary material. The bibliography is very extensive and includes periodicals that existed for several dozen years, as well as e.g. ‘Izraelita’ from Warsaw, whose changes of the editorial team (and frequently even views) are a source of invaluable information, but also journals that would only be published for one year. A significant part of the periodicals have been digitised, and many of them have been recorded on microfilms and are available in university libraries. However, some of them are still on paper in different institutions, archives and private collections.

‘When analysing the process of Jewish assimilation in the 19th century, we cannot stay within the framework of positivism, which is my favourite period. This process had already been initiated at the end of the Enlightenment, so we should go back to the Constitution of 3 May, in which Jews are not present at all. However, the research on Jewish minority and related questions already began at that time’, explains Prof. M. Piekara.

The Jewish population in Poland formed over hundreds of years, encouraged to settle here by the very modern Polish legislation, an element of which was the so-called Statute of Kalisz (1264) – a legal act conferred by Bolesław Pobożny, Prince of Greater Poland. An example could be Kazimierz near Kraków, where Jews (not only from Kraków) moved already in 1480s. Although, as emphasized by the literary historian, it wasn’t an idyllic land of milk and honey, the existing laws were favourable enough for many Israelites to settle in Poland (though there were certain enclaves where Jews were not allowed to settle, for example in the royal towns). Towards the end of the Jagiellonian reign, Poland had the biggest Jewish population in Europe.

Prof. M. Piekara focuses on all aspects of how the notion of nation was established in the 19th century and how Jews found themselves in this process.

‘It turns out that it occurred on very different terms. We often assume, somewhat intuitively, following Eliza Orzeszkowa’s footsteps, that the assimilation process ran only as national assimilation. Eliza Orzeszkowa inscribed it in our heads that this is the way it should be, whereas in fact there were numerous assimilation models’, says the researcher.

How did the Jews want to function in Poland? A large part of them defined themselves as ‘Poles of the Mosaic faith’, others as ‘Polish Jews’, and others still as ‘Jews from Poland’.

‘Characteristic is the position of Bertold Merwin, one of my favourite figures from that period. This politician, deputy to the Sejm of Galicja, who went on to become a legionnaire and lecturer teaching military history at universities, said with bitterness: ‘No anti-Semite should tell us that Jews are here at the mercy of Polish hospitality. This is not true! We are here – and we don’t need any confirmation or identity card. […] we consider ourselves to be the same as the very best of those whose names end with –ski or –icz’ (typical Polish surname endings). These words sound like a scream of despair – why someone who did so much for Poland, not only during the Partition times, must constantly excuse himself and do more than others, to be recognised as a Pole? Merwin wrote a book entitled ‘Żydzi w powstaniu 1863 r.’ (Jews in the 1863 Uprising), where he included a long list of those who fought and died. All that was left after many of them were hardly legible notes, e.g. ‘Josełe, tailor apprentice, aged 16…’. By participating in the Uprising, Jews declared their choice, their belonging to the Polish community’, adds Prof. M. Piekara.

In such an atmosphere, it is no wonder that zionism appeared towards the end of the 19th century, aiming to recreate the Jewish national state in the territory of ancient Israel. Theodor Herzl, the founder of Zionism, once he was expelled from a German student corporation, realised that he would never become a fully legitimate German in the eyes of others. The same experiences inspired the birth of Zionism in many European countries, especially in Russia. Following the Jewish pogroms, Zew Żabotyński (co-founder of Zionism in Russia) showed his disappointment by saying, ‘Whatever we do, we will never be fully-fledged citizens’.

The czarist Russia introduced its own anti-Jewish legislation. Deportations and mass immigration were perfectly illustrated in ‘Fiddler on the Roof’, a story based on ‘Tevye the Dairyman’ (1894), novel by Sholem Aleichem, a Ukraine-born Jewish writer. All Jewish inhabitants are forced to leave Anatevka, because their houses were in a zone that was prohibited for them, too close to the city, which the law didn’t permit: the zones were gradually expanded. The expelled Diaspora members left for Chicago, Kraków, Warsaw…

In the researcher’s opinion, the czarist Russia ‘managed’ the Jewish problem very well in this way and was capable of perfectly antagonising the society.

Wherever the Jews went, they would always become a foreign element. In the czarist Russia, anti-Semitism was an element of the internal policy. Anti-Semitism was born in the 19th century, and its driving force was unclear anthropological studies, which also became the foundation of racism. According to these theories, the best race was white people, ideally from the north of Europe, of the German race or Scandinavians. Jews were defined as a race full of emotions, associated with the inability to take reasonable decisions. The breeding ground for anti-Semitism was the previous anti-Judaist slogans.

‘The 19th century press put into circulation numerous slogans which are still known nowadays. An average European citizen, who read newspapers that were within his reach, was able to form their own opinion, although it was a belief rather than truth’, emphasizes the researcher. The so-called ‘own opinion’ was nothing else but a transmission of the articles they read, which shaped the image of a Jew in the racial context. Journals mutually summarised the statements of politicians, scientists, and in such a simplified form they made their way to the society. The best example was the infamous Dreyfus affair, which set Europe on fire, claims Prof. M. Piekara.

The first stage of project implementation consists in reading several dozen thousand articles and taking the decision to put them into selected models. There are many concepts. The previous research results have already been published in scientific journals, including „Przegląd Humanistyczny” (Zbiorowość i tożsamość w polskojęzycznych czasopismach nurtu asymilacyjnego (1870–1910).

When asked whether life is long enough to read such an extensive material. Prof. Magdalena Piekara answers with a smile:

‘I think it is, and if not, well, we need to leave something for the future generations.

The article entitled ‘Assimilation of Jews in the 19th Century, or What Eliza Orzeszkowa Didn’t Know’ by Maria Sztuka was published (in Polish language) in the March issue of ‘Gazeta Uniwersytecka UŚ’, no. 6 (276) in March 2020. 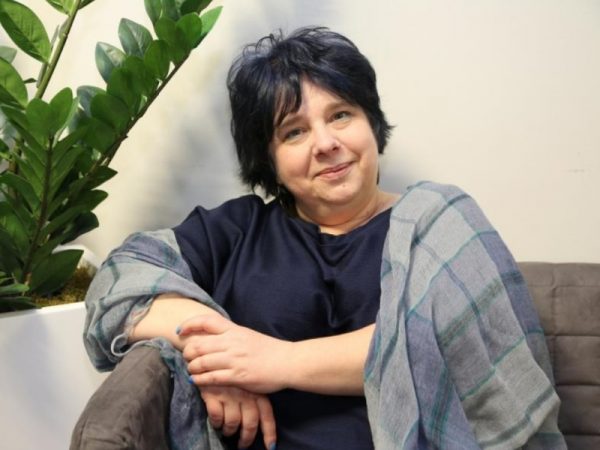 Prof. Magdalena Piekara from the Faculty of Humanities at the University of Silesia in Katowice | photo by Agnieszka Sikora