This site uses cookies
By using this website you agree to the use of cookies in accordance with the current browser settings.
Learn more Accept
Go to main content
COVID-19 security status
Level 0: no restrictions, basic health and safety at work rules
Coronavirus Statistics
home link archive Research on Polar Regions of the Earth

Research on Polar Regions of the Earth

In the summer of 1977, two employees of the Faculty of Earth Sciences of the University of Silesia: dr Jan Leszkiewicz, dr Jerzy Wach for the first time took part in a polar expedition to Spitsbergen. A year later, the second expedition of the University of Silesia – and the first independent – was organised, in which three members of the staff participated, namely dr Andrzej Kamiński, dr Jan Leszkiewicz and Andrzej Kozik MSc. It was managed by Jacek Jania who had degree of  at that time. On the fortieth anniversary of our university’s polar expeditions initiated by professor Marian Pulina we talk with professor Jacek Jania about the “polar fever”, the differences between expeditions organised in the past and today and about the importance of research on glaciers.

Dr Małgorzata Kłoskowicz: Professor, in 2017 Polish polar explorers celebrate several special anniversaries. Eighty-five years ago there was the first Polish polar expedition to the Bear Island in the Barents Sea. Sixty years ago in July 1957 the Polish Polar Station Hornsund was created in Spitsbergen. It is also forty years since the first polar expedition of the University of Silesia organised in cooperation with the Maritime University of Szczecin. Professor, you were a participant in almost all research trips of our university. How do you remember your first encounter with Arctic glaciers?

Prof. Jacek Jania: The first polar expedition I took part in was organized in 1972. I participated in it as a student of the University of Wroclaw, acting as field assistant for older colleagues – researchers. In addition, I collected research materials needed to prepare my master’s thesis. The first contact with glaciers is remembered for the rest of your life. In our jargon there is an expression of “polar fever”, and I felt it then. You can admire the beautiful, raw and clean landscape of the north. Something inexpressible pulls a man into those areas. Then, at the beginning of each year, you only think about preparing for the next trip… 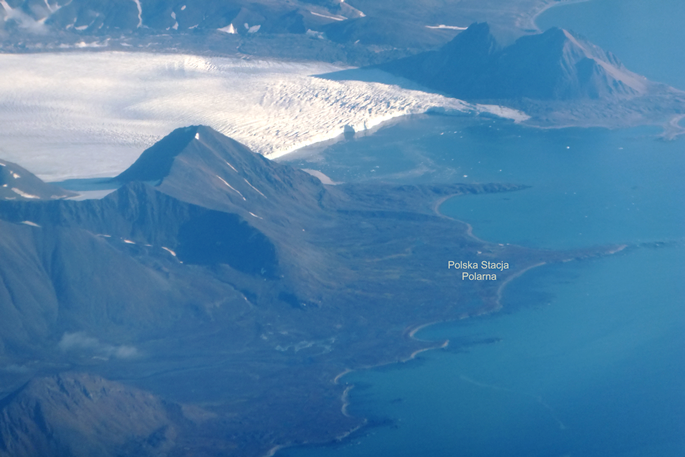 MK: The year 2017 is therefore also a jubilee year for Professor as your first encounter with glaciers took place 45 years ago. How have polar expeditions changed over the years?

JJ: During the first polar expeditions of the University of Silesia, often the simplest tasks took much more time. Communication between research groups as well as transport were the most difficult at that time. Penetrating the extensive research area required a lot of effort and of course it lasted longer than today. During my first polar expedition, I worked mainly as a “paddle engine” (laughs). I was sailing with a friend on a boat with supplies for the field group in the substation. Janek was constantly repairing a small engine which was always fickle, while I was paddling. As long as the sea was calm, we even enjoyed this trip, but when the wind came and we started to move away from the mainland towards Greenland, we were not laughing. Currently, the University of Silesia and the Polish Polar Station Hornsund, with which we closely cooperate, have at their disposal boats and sea pontoons with reliable engines, as well as new snowmobiles. Thus, the work of scientists is not only safer, but also more comfortable, both in summer and winter.

The method of collecting and transmitting information has also changed. Today, in our field work we use not only the Internet, but also radio communication or satellite phones. Thanks to satellite connections, records are received from measuring devices located on the glacier. The administrator of the Polish Polar Station and the year-round data collection system is the Institute of Geophysics of the Polish Academy of Sciences. The changes related to the organisation, security, and especially the scientific documentation of polar expeditions are therefore massive.

MK: Due to the new technological possibilities, is the research conducted by Polish scientists more extensive than it used to be?

JJ: My answer may be a bit surprising. Well, the logistic and technological limitations that we struggled with until the early 1990s ultimately worked in our favor. Polish glaciological studies are absolutely unique on a global scale. We have long record of observation series of the same glaciers, which from the perspective of diachronic research is of fundamental importance. If we had had, for example, helicopters, ships or more powerful boats at our disposal back then, we would certainly not have focused on observing so many physico-chemical parameters of one region. Today, it turned out that a relatively small area studied for several decades, taking into account a significant number of parameters, is a unique database on a global scale with an excellent source of information, also related to the climate change and the polar environment change taking place before our eyes.

MK: What changes do scientists see in this Arctic space?

JJ: First of all, with each subsequent trip we observe how quickly the environment of our detailed research in the southern part of the island of Spitsbergen changes. The range and thickness of glaciers are changing and this is unquestionable evidence of global warming. Accordingly, their weight and shape are reduced. One of the research projects led by Mariusz dr Grabiec, confirmed that the Hornsund fjord in the south of Spitsbergen will soon become a strait connecting the waters of the Greenland Sea and the Barents Sea. The effect of this process will be, among others, a combination of cold sea current carrying sea ice from eastern Spitsbergen with warm sea current flowing north on its west side. This will probably change the marine environment of the regions. In addition, it will also open a new sea route and contribute to the development of tourism in this region. Who would not like to “swim on the glacier” that appears on older maps? The Polish Polar Station is also located here. These changes will affect its functioning. We will monitor them.

MK: One of the topics dominating in the media is global warming and the associated rise in the level of the world ocean and melting glaciers.   What can you say about these processes on the basis of the collected data that you mentioned?

JJ: Our longitudinal observational series contain data that gives us knowledge about trends and the rate of climate change in the Arctic, and thus indirectly in the whole Earth. It turns out that the Atlantic Arctic region is warming 3–4 times faster than the European area. This phenomenon is called arctic amplification. The average annual temperature in our area increases by more than 1°C for ten years. For comparison, the value for the area of Poland is around 0.3°C per decade. What’s more, the last several years clearly indicates the acceleration of Arctic warming processes. Glaciers are also decreasing faster.

MK: Will it be even warmer?

JJ: Yes, it will be warmer. Accordingly, the sea levels also increase by about 3.5 mm per year. Małgorzata Błaszczyk, DSc, Eng. analysed glaciers ending in the sea for the entire Svalbard – the Norwegian archipelago, of which the island of Spitsbergen is part. It involved satellite methods and calculated how much ice in the form of icebergs gets into the sea from land, thereby increasing the level of the world ocean. Of course, this process explained for Spitsbergen, is not so significant in the context of global change, such as the supply of icebergs from Greenland, for example. However, our detailed and long-term research in a limited area is very important for creating models on the basis of which we can effectively predict such changes on a wider scale – also for Greenland glaciers, and this is directly relevant to the changes at a global level. There are many indications that accelerated surface melting of glaciers, their more intensive movement and so-called calving (i.e. the formation of icebergs) will in the long run result in an increase in ocean level not by millimeters, but by “launching” the West Antarctic glaciers – even by meters. A thorough examination of the processes I mentioned may allow for more accurate prediction of the scale and time range of this threat and thus better prepare for it.

MK: What other information does the research on modern glaciers and models constructed on its basis provide?

JJ: They can be used to study the recent geological past of Poland.   Such analyses were conducted by, among others, dr Agnieszka Piechota. She is the author of a well-made numerical model depicting the fluvioglacial water drainage underneath the Scandinavian ice sheet for Pomerania. On this basis, she formulated a number of conclusions regarding the course of the processes that determine the landscape of this part of our country. The area of Poland was covered several times by the Scandinavian ice sheet over the last several hundred thousand years. The development and then the disappearance of these huge glaciers, was of great importance not only for the relief of the terrain in which we live, but also for the type of soil or the distribution of mineral resources, such as gravel, sands, clays and loams used in the construction industry. The results of the mentioned research perfectly match the location of picturesque, deep ribbon lakes in Poland. What’s more, based on this type of models, we are also able to indicate the possible places of occurrence of the mineral resources just mentioned. In other words, by monitoring contemporary processes of glacier recession, we can describe phenomena that occurred in the geological past even several thousand years ago. We are starting to understand better the mechanisms of processes affecting the current shape of the Earth’s polar regions, as well as those affecting the global environment. Glaciers are a fascinating yet difficult subject of study.

MK: Thank you for the interview.

Professor Jacek Jania is a researcher of glaciers and the environment of the polar regions, a renowned geomorphologist and specialist in remote sensing, as well as an international authority in the field of research on glaciers entering the sea. He is the head of the Department of Geomorphology at the Faculty of Earth Sciences of the University of Silesia, and also the chairman of the Center for Polar Studies – KNOW, which consists of: Faculty of Earth Sciences of the University of Silesia (leading unit) as well as the Institute of Geophysics, the Polish Academy of Sciences and the Institute of Oceanology, the Polish Academy of Sciences. A member of the European Polar Board (EPB) and the Board of the Polish Polar Consortium consisting in 18 scientific units, and the chairman of the Committee on Polish Research at the Presidium of the Polish Academy of Sciences.