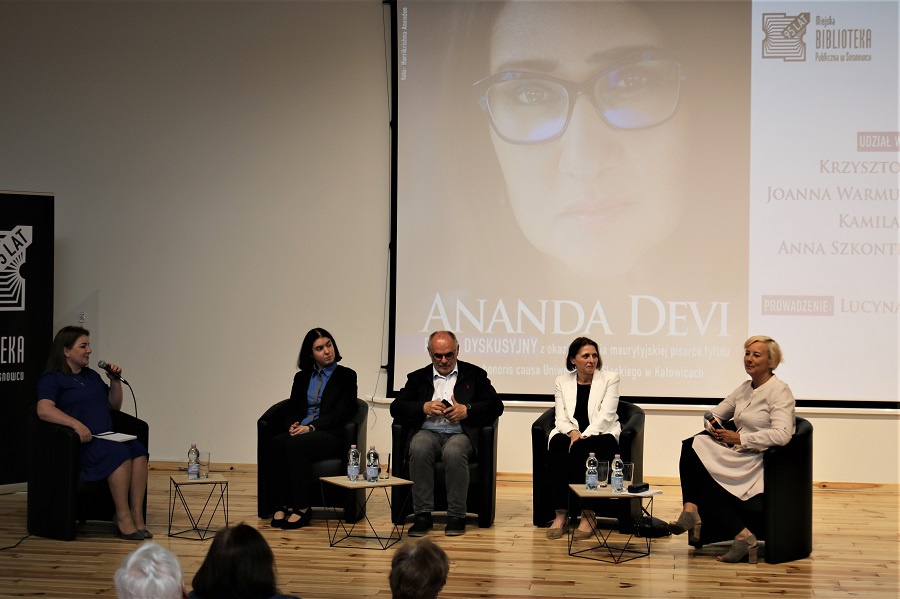 Miejska Biblioteka Publiczna (The Municipal Public Library) in Sosnowiec and the University of Silesia in Katowice would like to invite you to participate in a discussion panel organised on the occasion of awarding the tile of honorary doctor of the University of Silesia to Ananda Devi, a mauritian writer. The meeting will be held on 14 June 2022 at 6 p.m. in Aula Zagłębiowskiej Mediateki at ul. Kościelna 11 in Sosnowiec. The entrance is free.

Ananda Devi is a mauritian translator and author writing in French. Some of her short stories written in the teenage years were included in the “Solstice” collection published in the 1970s. She received the Radio France Internationale award for her literary works at the age of fifteen. She studied in London, where she obtained a PhD in social anthropology at the London School for Oriental and African Studies. She works as a translator and writes novels – her works are studied by literature and culture researchers focusing on postcolonial and feminist issues.

The discussion will be joined by:

The panel discussion will be led by Lucyna Sadzikowska, PhD, DLitt, Associate Professor – Literary scholar, who twice co-developed publications nominated for the “Polityka” Historical Awards in the category of primary source collections, member of the editorial office of “Bibliotheca Nostra”.