This site uses cookies
By using this website you agree to the use of cookies in accordance with the current browser settings.
Learn more Accept
Go to main content
COVID-19 security status
Level 0: no restrictions, basic health and safety at work rules
Coronavirus Statistics
home link GEPARD news: GEPARD GEPARD | Meeting of the international consortium

GEPARD | Meeting of the international consortium

Presentation of the current status of implementation to achieve the results of the Gender Equality Programme in Academia – Raising Diversity project and discussion of communication and dissemination strategies. These were the goals of the virtual meeting that took place on 24 March 2022 led by the University of Silesia in Katowice.

During the first part of the meeting, we have gathered the participants’ remarks on the prototypes of tools supporting the analytic works in the project, which are necessary to prepare a report on the current practice of gender equality plans and a methodology guide on modelling diagnostic, monitoring, and evaluative actions in the context of gender equality within university space. The next part of the meeting was devoted to the scope of works suggested to be implemented due to the development of a package of informational and educational materials entitled “Paths to Equality.” Furthermore, we were presented with the concept of communication and dissemination strategy for the project results – this part was majorly focused on the communication based on social media. The event was an opportunity to join an inspirational discussion, exchange experiences, and identify issues that require further effort from the project team.

The next meeting within the project will take place in Cyprus hosted by the European University Cyprus. 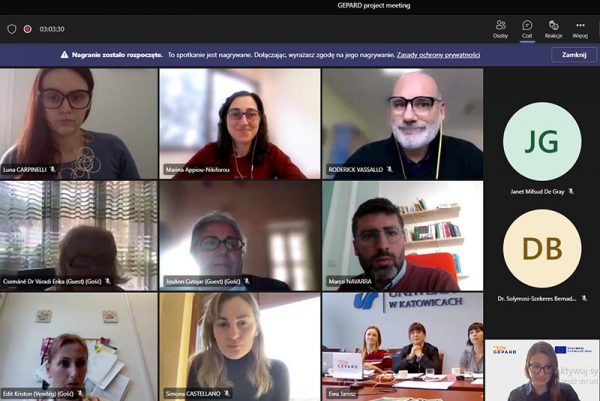 The meeting within the GEPARD project. Project materials