This site uses cookies
By using this website you agree to the use of cookies in accordance with the current browser settings.
Learn more Accept
Go to main content
COVID-19 security status
Level 0: no restrictions, basic health and safety at work rules
Coronavirus Statistics
home link Type information Katowice with the title of the European City of Science 2024!

Katowice with the title of the European City of Science 2024!

Now we can officially announce it: Katowice is the European City of Science 2024 (ECS)! The success of the Silesian Science Festival KATOWICE (ŚFN) has significantly contributed to this decision – the EuroScience Association awarding the title appreciated, among others, exemplary cooperation between city authorities and universities organising ŚFN, headed by the originator and leader of the project, the University of Silesia. Prof. Michaël Matlosz, President of EuroScience, informed about the choice of Katowice during the press conference which took place at the Scientific Information Centre and Academic Library (CINiBA) on 22 December 2021.

The prestigious title of the European City of Science has been awarded every two years since 2004. Its idea is to intensify changes for the society transformation towards science in specific European cities. It is intended to showcase the richness and diversity of European science, to foster mutual learning, scientific integration, interest in science among younger generations, and to develop European research without borders. ECS enhances the European and international profile of scientific community in a particular city and region, increases the involvement of citizens and scientific environment in local issues, inspires public investment in regional science and infrastructure and stimulates tourism.

‘I’m extremely excited. It’s a great challenge and a lot of work, but also amazing investment in the society and inhabitants of our region,’ said Marcin Krupa, PhD, Mayor of Katowice, during the conference. ‘To quote Izaak Newton: “What we know is a drop, what we don’t know is an ocean”. I am confident that with this team we can sail out into the ocean.’

‘I am very glad that Katowice will be the European City of Science 2024, because great technological and industrial projects, as well as future ambitions, are all present here. I believe that just as Katowice has turned into one of the leading cultural centres cultural in the country, the capital of Silesian Voivodeship will also become a carrier of science, which will serve for better future of Poland, claimed Mateusz Morawiecki, Prime Minister of Poland.

Katowice’s bid for the title of European City of Science is a joint initiative of mayor of the city, Marcin Krupa, PhD, and the academic community of Katowice, represented by the Rector of the University of Silesia, Prof. Ryszard Koziołek. On 30 September 2021, the Katowice City Council adopted a resolution of intent to apply for the ECS 2024 title, and EuroScience invited Katowice to individual negotiations for the award of this title – at the beginning of October, the president of the EuroScience Association, prof. Michael Matlosz already visited our city during the fifth edition of the Festival.

‘Katowice is to become an informal capital of European science. We have got the right to organise the European science olympic games, only it will last one whole year. Through development of universities in the region, advanced science and education may become a new unique Silesian industry,’ said Prof. Ryszard Koziołek. ‘In a way, the history of this region is the past and future of Europe, because all challenges faced by the Western man are present here: this space created the hunger for work, competition, exploitation, profit. Time to become smarter, time to listen to solutions offered by science, thanks to which we can repair the world.

The ECS title is associated with the right to organise the EuroScience Open Forum (ESOF) in 2024. The event is held every two years and is dedicated to research and innovation vital to the world’s future. ESOF Katowice 2024 will be one of the most prestigious scientific and technological events in the world. Earlier, in 2022, we are going to organise a conference accompanying the EuroScience Open Forum 2022 (ESOF 2022), whose host city will be the aforementioned Leiden.

Organisational support for initiatives related to the ECS title for Katowice has already been announced by Jakub Chełstowski, Marshal of the Silesian Voivodeship and Kazimierz Karolczak, Chair of the Board of Metropolis GZM. 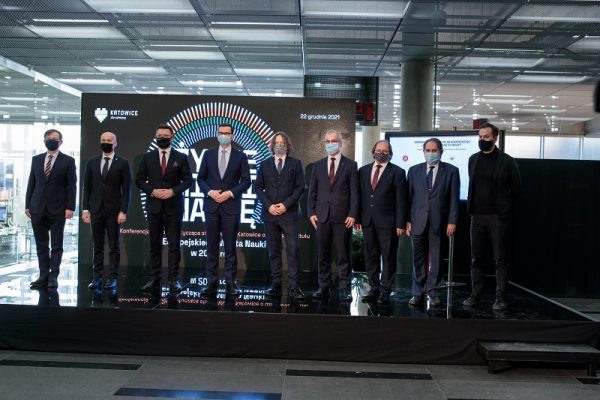