When a famous citizen of Toruń celebrated his birthday in the 15th century, he probably did not think that 547 years later the Polish Parliament would pass a law establishing February 19th as the Day of Polish Science. Nicolaus Copernicus’ birthday was chosen as an annual occasion to recognise the efforts and achievements of Polish scientists.

In 2022, the celebration of Polish Science Day will be held for the third time. This year it was joined by the Academic Consortium Katowice – City of Science, in order to celebrate the achievements of Polish scientists and all the people of science who make these achievements possible.

The title of European City of Science 2024, which was awarded to Katowice, is an expression of recognition for the achievements and potential of Silesian universities, especially understanding their role in the transformation of the region and improving the quality of life of residents. This honourable distinction is an opportunity to attract attention to our universities, obtain funds for research and investment, improve the quality of education, strengthen the ties between Silesian universities and global science, and make science and higher education the foundation for the development of academic cities, the metropolis and the region.

By working together, the universities are able to respond to the most important and extremely complex civilisational challenges facing the city and region. These include health care, energy, technological and social transformation after the era of heavy industry, climate change, digitalisation and cyber security, depopulation and improving general education.

As part of their core mission, the consortium universities educate 59,251 students in 747 majors and specialties. Education and research is carried out by 6068 academics, supported by 1787 PhD students and 4761 non-academic employees. During 2021 alone, 15055 people graduated from the universities of the City of Science Consortium.

In 2021, scientists of these universities obtained nearly 161 million PLN for their research, for the most part from over 400 domestic and foreign research grants. Scientists presented the results of their work in about 9,000 publications last year.

Much of that research has a direct useful dimension and brings solutions to problems faced by the region’s inhabitants. The consortium’s universities systematically extend legal protection to the results of their research work. In 2021 alone, several hundred industrial property rights were granted to them, mainly patents for inventions and protection rights for utility patterns.

The concern for the climate and environment is one of the most serious challenges of the Silesian region, to which scientists are trying to respond. In 2019, employees of the Silesian University of Technology patented a device for dedusting flue gases from low-power combustion installations fired by coal and biomass, which contributes to a significant reduction in the emission of solid fuel flue gases in heating devices, both in boilers and chimneys. In addition, scientists of the Silesian University of Technology investigate, among other things, the impact of indoor air on the health of children attending kindergartens during the winter and spring seasons, and deal with the protection of natural values in land-use planning.

The University of Silesia conducts regular air quality tests using its mobile laboratory, a hot-air balloon with measuring equipment in a basket that can often be seen in the skies of southern Poland at up to 4 km altitude. Geneticists at the University of Silesia are responding to drastic climate change by developing solutions for agriculture, e.g. barley resistant to drought and other stress factors. Humanists at the University are also making efforts to improve the quality of our environment, for example by including climate protection in education and training programmes in cooperation with the Visegrad countries.

The Jerzy Kukuczka University of Physical Education supports, among others, ecological tourism and mobility, thanks to an inland waterway vessel powered by an electric engine powered by photovoltaic cells. Researchers from the University of Economics in Katowice, as part of a consortium of nine partners from five European Union countries, contributed to the creation of a personalised virtual energy assistant eco-bot, which provides consumers with information about their daily energy consumption and makes individual energy saving recommendations. Staff at the Academy of Fine Arts in Katowice promote the use of ecological materials and sustainable production technologies in their research on crafts and the manufacturing process of craft products. During the UN Climate Summit COP 24, the artists presented designs made with care for ecology in the form of the exhibition “Eco Design It. In Silesia!”.

Improving health and quality of life

The Academy of Physical Education in Katowice has been implementing a project for people over 45 years of age to support healthy ageing since 2018. The Silesian Medical University carried out research on stopping overweight and obesity in children and adolescents and analysed the impact of pollutants listed in the European Environment and Health Action Plan on the health of society (e.g. heavy metals and indoor air pollution). One of the patents of the University of Silesia is a derivative [60] of fullerene, a therapeutic substance for use in anticancer therapy.

During the development of the COVID-19 pandemic, scientists created solutions to facilitate the fight against coronavirus. The University of Silesia analysed the influence of weather conditions on the results of contactless temperature measurement of people entering public institution buildings. Employees of the University of Economics in Katowice, in collaboration with King’s College London and 30 other universities from around the world, studied the activities supporting entrepreneurs during the pandemic (150 Polish entrepreneurs took part in the study). The Medical University of Silesia implemented training courses for physiotherapists, pharmacists and laboratory diagnosticians in COVID-19 vaccination, as well as training courses for doctors and nurses in oxygen therapy and mechanical ventilation of patients with features of respiratory failure. In addition, the SUM conducted a comprehensive study of the population of the Silesian agglomeration in terms of prevalence and risk factors of SARS-CoV-2 infection in this region (the study involved nearly 6,000 residents of Katowice, Sosnowiec and Gliwice). A group of SUM scientists representing various specialties wrote and published, the first in Europe, a publication intended for general practitioners on the treatment of post covidu, which thousands of Poles are struggling with today.

A group of researchers from the Silesian University of Technology has developed a system to support COVID-19 (CIRCA) imaging diagnostics based on X-rays of patients’ lungs, as well as a system for individual patient isolation and protection of medical staff from infection (MedShield) by isolating the patient’s head during medical procedures. In addition, the university’s scientists, in collaboration with WAAM company, have also designed a decontamination gate, which has already been implemented in 15 medical facilities across the country.

The universities play a culture-forming role, e.g. through artistic projects of particular importance, such as the Karol Szymanowski Academy of Music’s Violin Biennale Festival and Competition, during which the musical works of Mieczysław Wajnberg are presented, or the MusicAlive Piano Competition organised by artists from the University of Silesia. The staff of the Academy of Music are also involved in research on the support of prematurely born children, analysing the effectiveness of music therapy in the neonatal and infant period. The Academy of Fine Arts in Katowice regularly hosts, among others, the International Design Conference and the AGRAFA International Student Design Competition, the Triennale of Polish Graphics (the oldest prestigious review of Polish contemporary graphics) and the “Well-designed book – let’s start with children” – an event that aims to draw attention to the needs of the youngest readers and a wide range of issues related to designing books for children.

The horizon of scientific cooperation reaches far beyond the borders of our country. Each of the universities cooperates with selected educational centres abroad, which makes didactics more attractive and promotes science. Last year alone, the universities carried out over 40 European research projects and grants.

In the coming years, the universities of the City of Science Consortium will prepare and implement joint scientific, popularisation and educational projects, devoted in particular to:

Several effects of the presence and work of scientists of Silesian universities presented above, suggestively show how diverse and strong the academic environment is among the universities forming the City of Science Consortium. Together they are an invaluable asset for the city and the region, and the benefits of this cooperation are and will be measurable for its citizens. 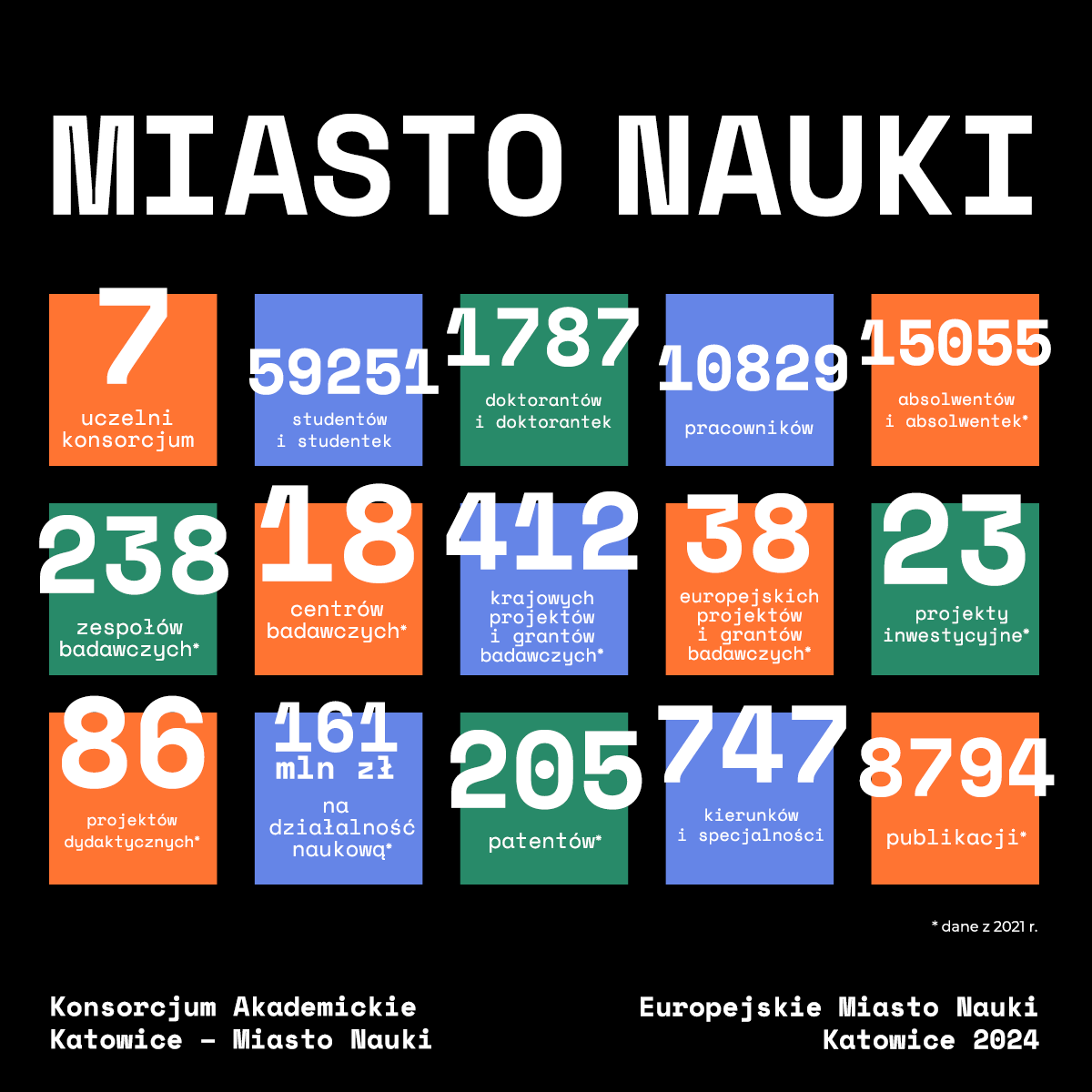