This site uses cookies
By using this website you agree to the use of cookies in accordance with the current browser settings.
Learn more Accept
Go to main content
COVID-19 security status
Level 0: no restrictions, basic health and safety at work rules
Coronavirus Statistics
home link Type articles An Aphid Chasing an Aphid Prof. Łukasz Depa about the Intimate Secrets of Hemiptera

An Aphid Chasing an Aphid Prof. Łukasz Depa about the Intimate Secrets of Hemiptera

It’s mid-February, we celebrate the Valentine’s Day, and in the morning you can hear the birds singing. The morning bird sounds prove that the spring is near. This is how birds mark their territories and begin to look for a partner and suitable location for building their nests.

Spring doesn’t always mark the beginning of the animal mating season. It is actually the other way round with aphids, which are the subject of research conducted by Prof. Łukasz Depa. Females and males begin their mating rituals in the early autumn, more less at the turn of September and October. However, anyone who has dealt with aphids in their garden at least once knows that these hemiptera don’t waste time in the spring or summer either. This is the period of intense asexual reproduction, without the males involved.

The world of aphids is dominated by females which breed by parthenogenesis. This means that their offsprings develop in ovaries without sperm, so with no male involved. It happens mainly in the summer, when the population of a particular species is quickly increasing. As a result, females give birth to subsequent generations of other females.

Fortunately, it turns out that the male is still useful in this case (laughter). The life cycle of aphids also includes the sexual reproduction phase. It provides these animals with genetic diversity, which, simply speaking, is the basis for survival of the species in the ever-changing environment. This increases the likelihood that certain percentage of population will survive in the most extreme environmental conditions. Therefore, aphids “take care” of spreading fast in the spring and summer, whereas in the autumn, in a way, they “seek for” genetic diversity.

The life cycle of aphids is fascinating. In the winter their eggs are hidden well in the nooks of the host plant. Interestingly, only females hatch from the winter eggs. They give birth to further generations of females, some of which are winged. These insects may relocate to other green areas, where they will bear subsequent generations of both wingless and winged females in the late spring. Thanks to this, the area which they cover increases, and this process goes on throughout the summer.

In the autumn, females which give birth to offsprings of both genders, i.e. males and oviparous females, appear in the population. Therefore, sexual reproduction may occur at the turn of September and October. Eggs formed in this way are laid again in the nooks of the plant where they will overwinter. Thus, we go back to the beginning and the whole cycle repeats. 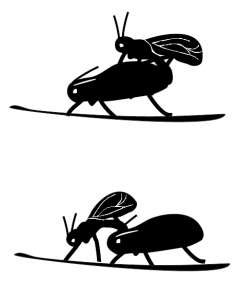 There are obviously also cases when males are fighting for a female, it’s a normal phenomenon. An interesting fact is the reverse, ventro-ventral copulation, which we managed to observe in Stomaphis graffiispecies. I was surprised when I saw it for the first time. What we usually observe is ventro-dorsal contact. Two different ways of copulation in hemiptera? It’s unusual in the world of insects.