This site uses cookies
By using this website you agree to the use of cookies in accordance with the current browser settings.
Learn more Accept
Go to main content
COVID-19 security status
Level 0: no restrictions, basic health and safety at work rules
Coronavirus Statistics
home link We Support #wehelpunderstand Polar explorers – specialists in living in isolation | Interview with Dr. Dariusz Ignatiuk

Interview with Dr. Dariusz Ignatiuk from the Institute of Earth Sciences at the University of Silesia, glaciologist associated with the Centre for Polar Studies at the University of Silesia for many years, who has stayed in Longyearbyen on Spitsbergen since September 2019, where he works as the Scientific Integration and Data Officer within the consortium Svalbard Integrated Arctic Earth Observing System (SIOS).

For polar explorers, researchers of the Arctic or Antarctic, isolation is nothing new. In a way, this is a natural element of research in these areas. You have also taken part in expeditions to such places and had to go on a long-term isolation. When did it all start?

I used to go on different kinds of trips already back in the high school – mainly to the Alps or Tatras. Obviously they did not last too long, usually 2–3 weeks. However, during such trips I would sleep in a tent, on a glacier, far away from the human settlements. I can say that it was an introduction to more serious expeditions with isolation, which I began to participate in after I started my dooctoral studies at the University of Silesia.  For several years now I have been conducting research mainly in the Artic, on Spitsbergen. I also had the opportunity to spend over 3 months in Alaska, where we lived in a small tent camp directly on a glacier. It was a small group of 5-6 people, and during that trip we were completely cut off from the civilisation. When it comes to Spitsbergen trips, ther are two types of them. First of all, we have typical expeditions from the University of Silesia in the autumn or spring, to the Polish Polar Station Hornsund or other partner stations. Such trips are usually short, between 3-6 weeks. I have been on about twenty such trips. Winter stay on Spitsbergen is a completely different experience. I once was the leader of the Polish Polar Station Hornsund, and we spent 13 months there in a group of 10 people back then. Wintering is over one year of living in isolation, in contact with civilisation only in such periods when scientists come, i.e. in the spring and at the end of the summer. Obviously, the hardest is the polar night period, when we are completely on our own.

Is being on your own a difficult experience?

It all depends on the people who are with you at the station, i.e. how the winter crew has been selected. I had the comfort of being able to choose the expedition crew myself. I received many applications (over 150) from people who wanted to take part in te expedition. I chose 50 applications for direct interviews, so that there were 2-3 candidates who met the competency requirements for each position. It was only when the competency requirements were met that I could select the group in terms of personalities, so that people were able to stand one another throughout the long winter period. Personal aptitude is not everything. In fact, you never really know what lies inside a man, how he or she is going to react to extreme situations, long-term isolation from the family, or change under the impact of polar night.  Several months in the dark makes people respond in very different ways. Much depends on what interests or hobbies they have, whether they are able to organise free time for themselves, etc. There are multiple variable factors here.

Someone could be a cool buddy on a daily basis, and then change 180 degrees during long-term isolation. Can we say that we get to know the real nature or character of a human being in extreme situations?

Yes, of course. It has happened many times that two best friends went wintering together and returned after 13 months as the worst enemies. Extreme conditions of isolation have such influence on people that even the smallest problem, a trifle may cause a very strong conflict. A man is capable of changing significantly while wintering and living in a small group, so the effects of such a journey can be both short-term and long-term. It is not only about negative changes – there are also many positive things coming out of expedition experience, and you get to know yourself better.

Are there interviews with psychologists before such journeys?

Yes, there are. Everyone must undergo the whole cycle of tests. They last approximately 2–3 days. In the past they used to be conducted at the Military Institute of Aviation Medicine, now they are carried out in a private outpatient clinic selected in a tender. Psychological tests are part of the examination. Unfortunately, only the expedition leader is informed whether the particular person is qualified or not. Without any details, because the doctors say that are bound by medical privilege. I don’t fully agree with their approach, because I know from my own experience that this is not enough. There were cases when a person had problems with going through the psychological tests, but finally passed them and went wintering. In my opinion, the expedition leader should be informed about such situations, to solve any potential conflicts that may affect the whole group.

And how do you solve conflicts in the far north?

In many different ways. Well… in the past, two gentlemen would go outside and solve the problem in the traditional way (laughs). However, the customs change, women go to the expeditions much more often, so now in the case of a conflict, it is the leader who must act as a mediator.

What kind of a human being do you have to be to go on a journey that requires long-term isolation? What personal features do you need to have?

There are no ideal qualities. Different people go on the expeditions – both introverts and extroverts. There are some who cannot live without fieldwork, and for them being on Spitsbergen is the right opportunity to stay outside. However, such people have problems when the weather is bad and prevents them from leaving the station, and they have to handle it for 2-3 weeks.  On the other hand, there are individuals who come to the station to work at the desk and are not interested in the environment, measurements in the field, on a boat, or distant trips on a scooter. This could be another problem for them, when a task is to be performed out in the field. Such person will not feel comfortable then. I think that the good personal features for such journeys include the willingness to stay with other people, the ability to face new challenges and organise one’s own working time.

When we hosted the astronaut Nicole Stott at the Silesian Science Festival KATOWICE last year, she told us that when you are at the space station, NASA arranges the whole working day for you, so that you have to perform all tasks to the letter and have very little time for yourself, so you definitely don’t get bored. What’s the organisation of working time like on Spitsbergen?

The working plan depends, to a large extent, on the season of the year. The summer period is very busy. We have a lot of external scientists then. I need to explain at this point that the polar station has a permanent crew (between 8 and 11 people) who spend 13 months there. On the other hand, there are some 30 more places that can be used by scientists representing different research institutions. During the summer period, the station is full, there are many people who conduct research in the water, on land, related to the glacial environment. Moreover, the station gets supplies – food, cleaning agents, fuel. We also make preparations for the wintertime and polar night. There’s a lot of work then. The polar night period, on the other hand, is a period of great silence. There’s ongoing monitoring, the station is being operated, but there are less activities outside, and they are significantly limited due to the darkness, higher likelihood of polar bear appearance and generally for safety reasons. During the polar night you definitely have to remember about the physical activity. You cannot stay within the four walls all the time. When we go outside, we do it in larger groups and take dogs with us. What also helps us is routine and certain regular pattern – we get up for breakfast, we have some tasks to perform, then lunch, some more tasks, and then dinner. You need to make sure that this daily routine is maintained, which is an important duty of the leader. When there are no urgent tasks, the leader must come up with some work to be done, like painting the ceiling, so that there was something to do during the stagnation period.

I’m asking how polar explorers handle the seclusion, because many people in Poland and around the world were suddenly isolated due to the coronavirus pandemic. However, nobody asked us, common people, whether we have the proper personal qualities to stay in isolation. Many people, also at the University of Silesia, also had to change their working mode to remote work and organise their timetable on their own at home. We mostly just had to learn it.

Those who depart to Spitsbergen also have to learn it. I’m currently working in a small international team and I’ve noticed that people manage the so-called home office to a different extent. They miss going to work. Even if the distance to work is two hundred metres, you have to close the door of your house and go to work, where you sit for eight hours, and then come back. The door of your flat is a border that separates the world of your home from the world of professional duties. And this is probably the greatest problem for those who work remotely – no border between the world of work and home. I’ve learnt a lot from Norwegians and their mentality. You need to impose a certain regime on yourself and switch the computer off. A break from professional duties is needed, because a human being no longer works effectively after many hours, and it is also necessary for your mental and physical health. The world will not collapse if you don’t answer an e-mail today.

Has the epidemic affected the life on Spitsbergen?

Fortunately, we have not had any coronavirus infection case on Spitsbergen, so we are a virus-free enclave. The island is basically closed for all tourist traffic. Also, in order to get to the island, you need to go through a four-week quarantine – first two weeks after arriving in Norway, and the other two weeks when you come to Svalbard. This eliminates any tourist traffic, and has probably saved us from the virus. The local university students were sent back to the country, and the university suspended all teaching until the end of the calendar year. The university may continue its research activity. There are no movement restrictions in the island. There are obviously recommendations to keep social distancing, but the restaurants and shops are open. However, there are so few people that it causes no problems.

Thank you for the interview and I wish you peaceful work.

The interview entitled ‘Polar explorers – specialists in living in isolation’ was published in the June issue of ‘Gazeta Uniwersytecka UŚ’ no. 9 (279) June 2020. 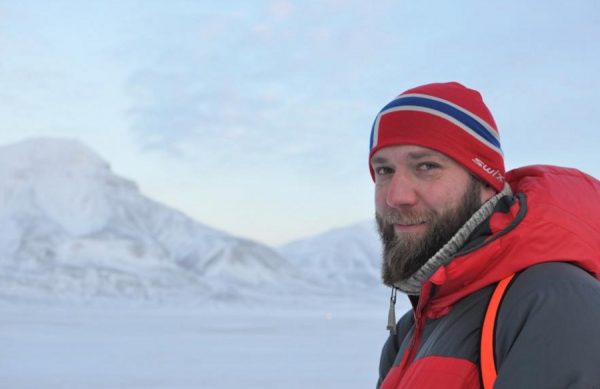 Dr. Dariusz Ignatiuk from the Faculty of Natural Sciences University of Silesia in Katowice | photo by Marta Kondracka 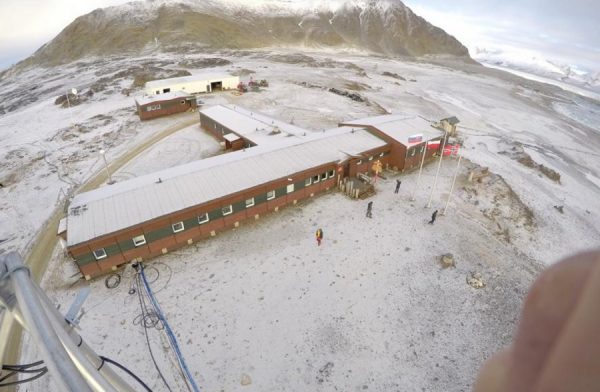 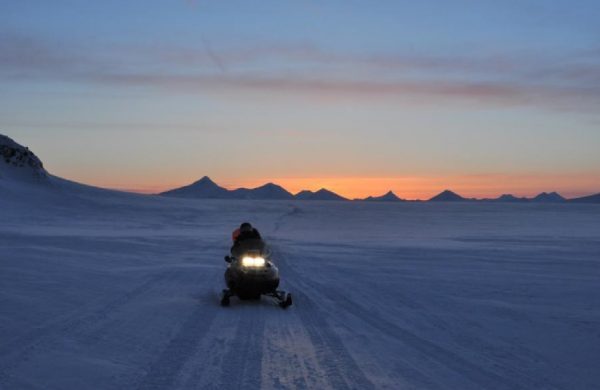