This site uses cookies
By using this website you agree to the use of cookies in accordance with the current browser settings.
Learn more Accept
Go to main content
COVID-19 security status
Level 0: no restrictions, basic health and safety at work rules
Coronavirus Statistics
home link News general Prof. Ryszard Koziołek will host a meet-the-author session with Olga Tokarczuk

The latest book by Olga Tokarczuk called “The Tender Narrator” has recently had its premiere. A unique off-site meet-the-author session with the Nobel Prize winner is organised on the first anniversary of the award. The event, which will be held on Thursday, 10 December 2020, will be hosted by Prof. Ryszard Koziołek – literary scholar, essayist, Rector of the University of Silesia.

It will be the only meeting with the Nobel Prize winner this year. Olga Tokarczuk’s readers can participate in the online event, which begins at 7 PM and will be broadcast on the following website:  Facebook – Tender Narrator: One Year after the Nobel Prize.

Prof. Ryszard Koziołek’s interview with Olga Tokarczuk will be preceded by the announcement of results of literary competition as part of educational programme “How to Win a Nobel Prize”. The programme also includes the broadcast of a part of Maria Peszek’s concert recorded on the occasion of the first anniversary of the prestigious award for Olga Tokarczuk. 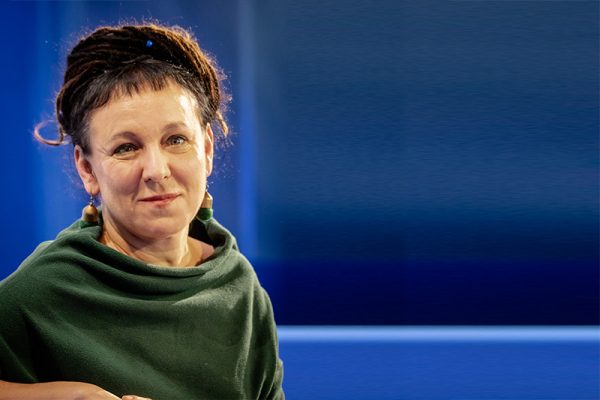