On 20 July 2022, the 58th polar expedition of the University of Silesia set off to Spitsbergen (Svalbard). A team consisting of: Michał Ciepły, PhD; Prof. Jacek Jania; Aleksandra Osika, MSc; and Dawid Saferna, MSc will continue the long-term monitoring of the disappearance of glaciers in the area of the Polish Polar Station in Hornsund due to the intense warming of the Arctic climate. The scientists will also carry out research on the reconstruction of the range of glaciers in the warm periods of the recent past (during the Holocene – the last over 11,000 years). The results of this project, funded by the National Science Centre within the PRELUDIUM 20 programme, will help to better forecast the effects of warming in southern Spitsbergen. The project is coordinated by Aleksandra Osika, MSc, PhD student of the International Environmental Doctoral School at the Centre for Polar Studies of the University of Silesia in Katowice. She is assisted by Dawid Saferna, MSc.

Michał Ciepły, PhD, and Prof. Jacek Jania specialise in the problems of glaciers flowing into the sea, which are particularly vulnerable to climate change. They examine, among others glacier calving processes (breaking-off). The team addresses a new issue in the evolution of such glaciers from ‘marine’ to land-ending. These works are co-financed under the “Research Centres Visibility” competition within the Research Excellence Initiative.

A particularly important task of the expedition is basic investigation and meetings with representatives of Norwegian institutions in Svalbard in order to prepare next year’s international field workshops, carried out as part of the project “Interdisciplinary Polar Studies (IPS-2023) Modular Meeting: Arctic Amplification-Glaciers-Environment”. The project is carried out under the “Excellent Science” programme of the Ministry of Education and Science (DNK/SP/513817/2021) under the supervision of Elżbieta Łepkowska, PhD.

The expedition to Spitsbergen was organised by the Centre for Polar Studies and is led by prof. Jacek Jania, who will be celebrating the 50th anniversary of his research in the Arctic this year. The next polar expedition of the University of Silesia to Spitsbergen will set off in autumn 2022. Its aim will be to continue monitoring changes in the polar environment, including estimating the run-off of fresh water to the Hornsund Fjord as a carrier of heavy metals (funding from the National Science Center under the OPUS 20 competition).

In summer, a small motor boat enables travelling from the Polish Polar Station to the distant corners of the Hornsund Fjord. The team of the University of Silesia in Vestre Burgerbukta bay. The waterfall “Pulina Springs” that flows from the karst cave in the background | photo: archives of the Centre for Polar Studies, University of Silesia 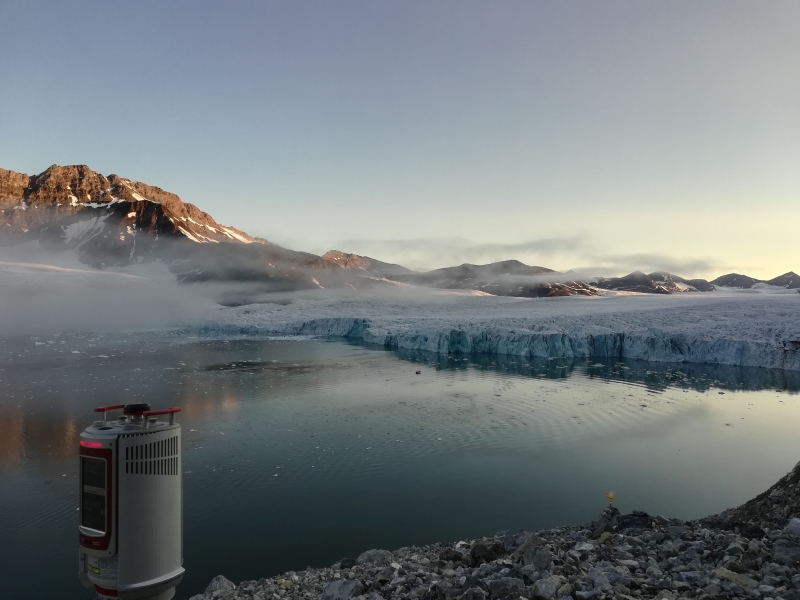 Terrestrial scanning of the Paierlbreen glacier front | photo: archives of the Centre for Polar Studies, University of Silesia