This site uses cookies
By using this website you agree to the use of cookies in accordance with the current browser settings.
Learn more Accept
Go to main content
COVID-19 security status
Level 0: no restrictions, basic health and safety at work rules
Coronavirus Statistics
home link Type articles Clean Odra? Soon not | Research by the Silesian Water Centre UŚ 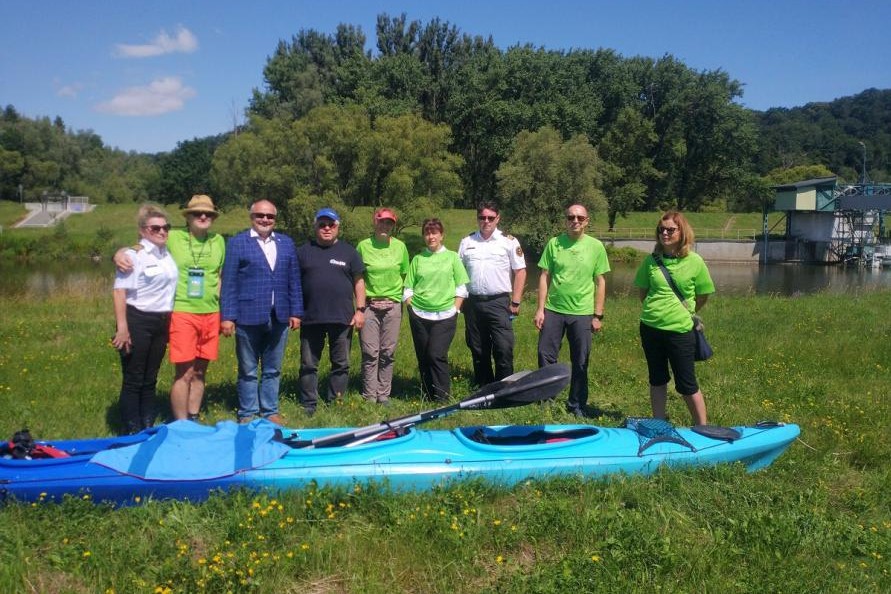 Start of the expedition in Ostrava | archive of Andrzej Woźnica

„We were the last to see the deceased alive. We crossed the river exactly five days before the catastrophe” says Andrzej Woźnica, PhD, Associate Professor, director of the Silesian Water Centre (ŚCW) of the University of Silesia, who participated in the project “Clean Odra? Why Not”.  The scientists participating in the project did not expect that their research would become so important in the context of the ecological disaster on the second largest river in Poland.

Rafting on the Odra river is the second project carried out by the centre in collaboration with the Foundation “Why Not”. Last year, scientists spent almost two weeks examining the quality water in the Wisła river. The choice of Odra for the next expedition was therefore obvious. Both rivers carry huge amounts of water to the Baltic Sea, so their condition is important not only at the estuary of the river, but also along its entire length.

Test every kilometer of the river

The expedition started on 15 July 2022 in Ostrava, Czech Republic, and ended ten days later, in Szczecin. They  conducted over six hundred analyses during their 752 km route. Some of the samples were sent for testing to the accredited laboratory of the Institute of Ecology of Industrial Areas in Katowice, as well as to the University of Szczecin, whose employees collaborated on the project and were also involved in the previous expedition down the Wisła river. However, the vast majority of analyses were carried out on an ongoing basis, during the expedition.

Scientists crossed the river on kayaks and UŚKA II – a research boat equipped with specialsed equipment for field research. With the help of multi-parameter probes, hydrologists were able to make quick and frequent measurements – instruments immersed in water immediately provided results.

This is how the members of the expedition analysed the water in the river and assessed selected parameters of its quality, such as electrical conductivity (which indicated salinity), chlorophyll, phycocyanin and oxygen. “Flows indicating how much water flows in the river were also checked” explains Prof. Andrzej Woźnica, a scientist participating in the expedition.

However, the Odra posed some challenges to the crew members. The only fragment where free sailing on the university research boat was possible, covered a section of 200 kilometers from Kędzierzyn-Koźle, which is one of the largest inland ports in Upper Silesia (near the mouth of the Gliwice Canal), to Malczyce – a village located in the Lower Silesian Voivodeship. The members of the crew had to pass twenty-five sluices. The problem during the expedition was the low level of the Odra river, whose flow depth (the lowest depth on the navigable section of the river) was nine centimeters. What is more, some places posed an additional danger, as logs protruding from the bottom could damage the motorboat.

Although the members of the project “Clean Odra? Why Not” could not have predicted that shortly after the end of the expedition there would be a catastrophe in the second largest river in Poland, the director of the Silesian Water Centre was not surprised by the fact that this happened.

“The condition of the Odra river has been worrying for a long time, but during the expedition there was no indication that we deal with deviations from what usually happens. Odra has a two hundred years history of water pollution” says the scientist.

The terrible condition of the river flowing through three European countries (the Czech Republic, Poland and Germany) is evidenced primarly by the high concentration of sodium, potassium, chloride and sulphate ions. Odra is a watercourse heavily transformed by man and polluted, which is why its waters are classified as out-of-class waters, i.e. not meeting the standards of the Environmental Protection Inspection.

This condition is influenced by both the presence of industry in Upper Silesia and the fact that it is located in a highly urbanised area, as it significantly affects the condition of waters and its living organisms. The situation is also not improved by the small catchment area of ​​the Odra river in this section, which results in low supply and flows in the river, and it may also result in low water quality. The watercourse is much more anthropogenic and regulated than the Wisła, and it also carries significantly less water – all this makes the Odra much more susceptible to various types of disturbing phenomena.

Prof. Andrzej Woźnica has no doubts that the catastrophe which occured on the Odra river this summer may happen again and even affect other rivers in the country. “I think that this was not the first event of this type on the Odra river, and it could have occurred earlier on a smaller scale, but no one had thoroughly investigated it then. Every episode like this, such as fish mortality, should be fully examined and explained. Only then will we know how to counteract it in order to avoid or limit the effects of such larger-scale events. 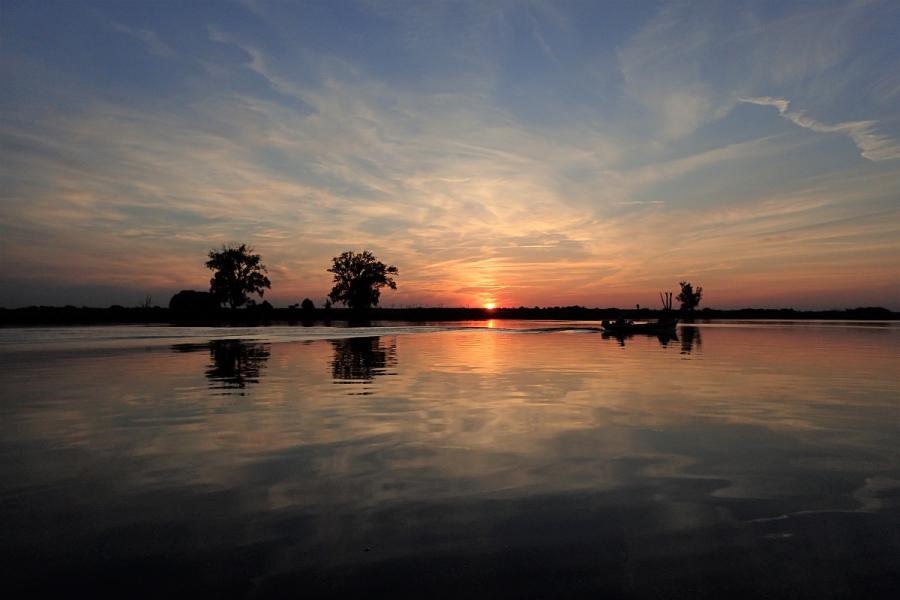 The Odra pool before the last threshold of the canalised river in Malczyce | photo: Aleksandra Rubin

The project carried out by the Silesian Water Centre and the Foundation “Why Not” is unique and valuable because the team conducted research along the entire length of the river at the same time. Thanks to this, the obtained data allow for extremely precise results indicating the state of the river.

It is surprising that on more than 700 kilometers of the Odra river, constant monitoring is carried out at only seventeen points. One regular measurement is therefore placed more or less once every fifty kilometers of the watercourse, and a lot can happen along this length. The analyses carried out by hydrologists and hydrobiologists of the University of Silesia make it possible to assess not only the condition of the river, but also its tributaries. They also provide information on which of them are particularly important from the point of view of water quality, and enable locating of an emerging problem.

“It’s not so much about taking samples more often, as about doing a full analysis of the river from time to time to see what’s really going on there. These selective measurements do not always show the real nature of the river and the changes taking place in the catchment area” notes prof. Andrzej Woźnica.

The July catastrophe on the Odra river was certainly caused by pollution – not only by industrial sewage resulting from, among others, mining activities, but also domestic sewage related to modern human functioning on the river and pressure on the environment exerted by heavily populated towns. For years, the river has been struggling with anthropogenic changes that significantly weaken its immunity, so events similar to those we witnessed in July this year may occur more often.

Return on the River

The data collected by hydrologists and hydrobiologists from this year’s trip on the Odra are already an extremely valuable source of information on the river. Articles and scientific papers are currently in preparation, although the director of the Silesian Water Centre points to the need to re-examine it in connection with the July disaster. The scientists plan to return to the Odra river as soon as before the end of this year.

“We started taking care of rivers a bit late, and it seems that what happened on the Odra river clearly indicates the need for much greater involvement in their protection. Water quality in Polish rivers is really bad, as indicated by the analyses of the Inspectorates for Environmental Protection. Our aim is to draw attention to the need to improve the condition of their waters. The incident on the Odra river is a particularly important sign that water must be considered from the perspective of its quantity and quality. It is very important” emphasises the biologist.

Researchers from the Silesian Water Centre do not intend to stop at Wisła and Odra. They do not limit themselves to Polish rivers only. In 2023, an expedition to explore the Neman river is planned. The river flows through Belarus, Lithuania and the Kaliningrad Oblast belonging to Russia, but the current geopolitical situation puts these plans in doubt. Initially, scientists from the Vytautas Magnus University in Kaunas expressed their willingness to cooperate.

Hydrologists would like to study a few rivers that flow into the Baltic Sea to see which one is the most polluted, and to compare the condition of individual watercourses in different countries in the region. This important undertaking would also allow establishing and strengthening international cooperation, and thus, jointly developing actions that would result in the improvement of the condition of nearby rivers and the sea.

The article “Clean Odra? Soon not” was published in the November issue of the Gazeta Uniwersytecka UŚ (University of Silesia Magazine) 2(302)