This site uses cookies
By using this website you agree to the use of cookies in accordance with the current browser settings.
Learn more Accept
Go to main content
COVID-19 security status
Level 0: no restrictions, basic health and safety at work rules
Coronavirus Statistics
home link L-events SPN: Prof. Robert Musioł | The magic bullet and the unhealthy appetite of cancer cells

Research on new medicines is always a great challenge for scientists, especially when it comes to solutions that are to help in the fight against cancer. What if the weapon against cancer cells is their… appetite? Should the medicine always hit the bull’s-eye to be effective? Our guest of the 8th edition of the Scientific Premiere Stage: Science Talk Show, Prof. Robert Musioł from the Faculty of Science and Technology, seeks the answers to these questions.

In order to prepare for the war against cancer, the biggest serial killer in world history, we have to carry out interdisciplinary research in various fields, such as chemistry, biology, genetics, and even computer science. The reason? Our sworn enemy is highly unpredictable. Cancer is a vicious beast strongly connected to humans.  Our guest of the 8th edition of the Scientific Premiere Stage, Prof. Robert Musioł from the Faculty of Science and Technology, carries out research on the use of cancer cells’ unique features against themselves. As a result, scientists from the University of Silesia have managed to develop compounds thousands of times stronger than iron chelators that were originally studied for cancer treatment.  The results of the experiments have been published multiple times in such prestigious scientific journals as “Cancers,” “European Journal of Medicinal Chemistry,” or “Scientific Reports” (a new journal from the publishers of “Nature”). These experiments are also a base of several patents.

Seeking effective anticancer pharmaceuticals is challenging due to two reasons: the disruptiveness of cancer cells and its similarity to body cells. However, from the effective meds, we mostly expect their selective effect.

“When it comes to cancers, the problem is that cancer cells are still the patient’s body cells. These are wild cells that behave abnormally and do not want to obey the signals of the environment. That is why it is so difficult to develop a medicine that will be able to ‘tell apart’ cancer cells from healthy tissues,” explains Prof. Robert Musioł.

The idea that Prof. Musioł’s team implements is to take advantage of cancer cells’ weak points, e.g., their increased appetite for certain factors.

“It is said that cancer feeds on sugar. As a matter of fact, all cells need glucose as their main source of fuel, but cancer cells use it slightly differently, in a bit less effective way,” says the scientist. “Due to its faster growth and uncontrolled multiplication, they need more energy. It is similar to iron, which, apart from its basic function in haemoglobin, is necessary to maintain the normal cellular metabolism, related to the conversion of glucose into energy.”

The very iron has become the target of the researchers from the Faculty of Science and Technology. Their research were carried out under several grants. One of them is a project “Dual ionophores as multi-target agents against pancreatic cancer,” financed by the Polish National Science Centre with the amount of over PLN 1.6 million. The idea of the project is to take advantage of the high iron demand and point the already accelerated metabolism of the cancer cells against themselves.

“It is like giving the cells poisoned cookies, letting them hurt themselves,” explains the guest of the 8th Science Talk Show.

Selectivity is not that important

In research on an anti-cancer pharmaceutical, Prof. Musioł partially rejects the assumption that selectivity is the most important feature, and a good medicine should have as limited number of targets as possible. Until now, such effects have been considered harmful and leading to undesirable effects.

“We decided to reject the ‘one disease-one target-one medicine’ assumption. Not only have we agreed to be multi-purposed, but we even create our medicines in that particular way. This allows to simultaneously attack several points in a cell and increases a pharmaceutical’s effectiveness,” says the scientist.

Prof. Musioł recalls Paul Ehrlich, an outstanding researcher and discoverer of the first effective medicine for treating syphilis, and the developer of the technique of staining tissues that eventually became the basis of histology. The German chemist and bacteriologist was the first to use the term ‘magic bullet’ to describe a medicine that can bypass secondary targets and hit the primary one. Researchers from the University of Silesia assumed that by having such a magic bullet that can hit several targets at the same time, we could afford… shooting blind.

“We have discovered that our ionophores, apart from their pro-oxidative effect, reduce the antioxidant potential of a cell. All cells have a system of preventing damage caused by free radicals, and due to the fact that cancer cells have increased metabolism, their protection is stronger. If pro-oxidant effect and damage to the protective barrier occur simultaneously, the destruction of a cell is accelerated, and what is particularly interesting, it turns out that healthy tissues are safe. Since their level of oxidising factors is much lower, such medicine does not lead to an abrupt imbalance and death because such a cell can cope with them,” explains Prof. Musioł.

Following Paul Ehrlich footsteps, Prof. Robert Musioł developed an interest in staining tissues, which prompted him to work on compounds that not only bind metals (zinc, in this particular case) but also glow under the influence of UV, which allows to use them in the diagnosis and treatment of various diseases. You could read about it in a recently published article on laboratoria.net.

The fascinating topic of fighting against cancer will be discussed by Prof. Robert Musioł during the 8th Scientific Premiere Stage: Science Talk Show on 29 April 2021 at 6 p.m. The meeting will be hosted by Katarzyna Głuch-Juszkiewicz, a journalist of the Polish Radio Katowice.

Links to the event

The previous meetings are available on the University’s YouTube Channel. 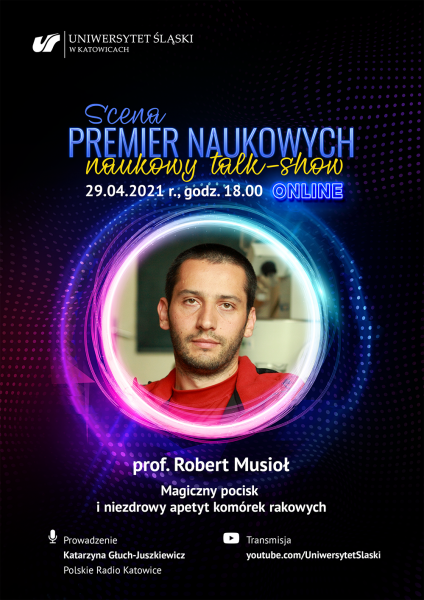