The next edition of Scientific Premiere Stage: Science Talk Show will be a feast of music. Pianist Dr Aleksandra Hałat from the Faculty of Arts and Educational Science at the University of Silesia will tell us about discovering the music of Karol Rathaus. In the second part of the event, Karol Rathaus Ensemble, which was established on the initiative of Dr Aleksandra Hałat, will invite us to the first Polish performance of one of Rathaus’ chamber works.

How was Rathaus’ work influenced by the diversity of cultures that he came across during his lifetime? What is it like to discover the composer’s archival works? Does Dr Aleksandra Hałat have any further plans related to Rathaus’ music? Dr Aleksandra Hałat will answer these and other questions in the next episode of our series entitled “Scientific Premiere Stage: Science Talk Show”. The meeting will be hosted by Regina Gowarzewska – journalist and Head of Concert Office at the Silesian Philharmonic.

The second part of the event will be the first ever Polish performance of Trio op. 53 for clarinet, violin and piano by Karol Rathaus Ensemble: Piotr Lato – clarinet, Marcin Hałat – violin, Aleksandra Hałat – piano.

The previous Science Talk Shows are available on YouTube channel of the University of Silesia. 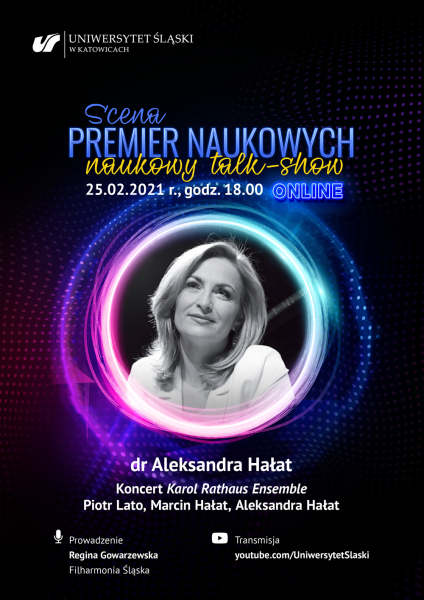 While searching the archives, Dr Aleksandra Hałat from the Faculty of Arts and Educational Science at the University of Silesia found manuscripts of two works by Karol Rathaus which have never been recorded before: Trio op. 53 for clarinet, violin and piano (1943), and Trio Serenade op. 69 for violin, cello and piano (1953). The pianist invited the following three musicians to perform these pieces together: Marcin Hałat (violin), Marcin Mączyński (cello) and Piotr Lato (clarinet). Although they didn’t take to Rathaus’ compositions immediately, Dr Hałat explains that “the deeper we went into the music, the more interesting things we discovered. Our approach and our playing developed until we finally met in the recording studio.”

The project of recording Karol Rathaus’ works was carried out within research teams of the Faculty of Arts and Educational Science at the University of Silesia. The album entitled Karol Rathaus Piano Trios, recorded by Karol Rathaus Ensemble, was released by DUX on 21 January 2021.

Who was the composer?

Karol Rathaus was born in 1895 in Ternopil (Tarnopol) as a subject of the Russian Tsar in a Jewish Polish family. He studied in Vienna and Berlin, and served in the Austro-Hungarian army. At the turn of 1920s, he rose to fame as a composer in Germany, where his works were performed under the greatest conductors, such as George Szell, Wilhelm Furtwängler and Otto Klemperer. During that period he also became well-known as a talented author of film music. The harmonious development of Rathaus’ career was interrupted when national socialists came to power in Germany. 1933 marked the beginning of the composer’s period of exile. After spending a couple of years in Paris and London, he moved to USA. Although Karol Rathaus was no longer as successful as a composer, he became a valued teacher. He settled in New York, where he lived until his death in 1954. He was essential in establishing the faculty of music at Queens College, which houses Karol Rathaus Papers – the archive of the composer who was largely forgotten after his death.

For several years, we have seen a renewed interest in Rathaus’ music. In 2019, Queens College, the university that the composer was associated with, organized a festival of his works. Discovering Karol Rathaus, a documentary film about the composer, is currently in production. The album Karol Rathaus Piano Trios both continues this trend and writes some new history by presenting the unknown face of an artist worth remembering.