What do seemingly unrelated Polish, Russian, and Jewish poets have in common? During the 11th edition of the Scientific Premiere Stage: Science Talk Show, we will talk with Prof. Marian Kisiel about how different languages and experiences of the characters of his newest book intertwined into a certain whole.

Emil Zegadłowicz, Jerzy Liebert, Anna Achmatowa, Rachela Bojmwoł, Sołomon Bart, Tadeusz Różewicz, Adam Czerniawski, Andrzej Busza, Anna Frajlich, Ewa Lipska. As the author writes in the introduction, these poets’ poems “do not want to exist together, yet do not want to be apart. The poems have bound with each other with some strand that tightens and trembles but at the same time loosens, as if it reconciles with the fate that what is unbound cannot be bound together.” The authors described in the sketches are linked by the “miserable time” of 20th century and its distress: a unity of fates and pieces.

The surprises resulting from the titular twines have become a subject of interest of Prof. Marian Kisiel, based on which he has written his newest publication Splot. Szkice o poezji polskiej, rosyjskiej i żydowskiej (The Twine. Sketches on Polish, Russian, and Jewish Poetry). During the 11th edition of SPN: Science Talk Show, Prof. Marian Kisiel, critic, literary historian, poet and translator, professor at the Institute of Literary Studies will talk about the poems and poets, which were “welded through chance, exception, and necessity.” We can be sure that it will be a fascinating tale.

Be with us on 1 July 2021 at 6 p.m. The host will be Ewa Niewiadomska, a journalist of the Polish Radio Katowice.

We would like to remind you that the previous meetings are available on the University’s YouTube Channel.

Links to the transmission: 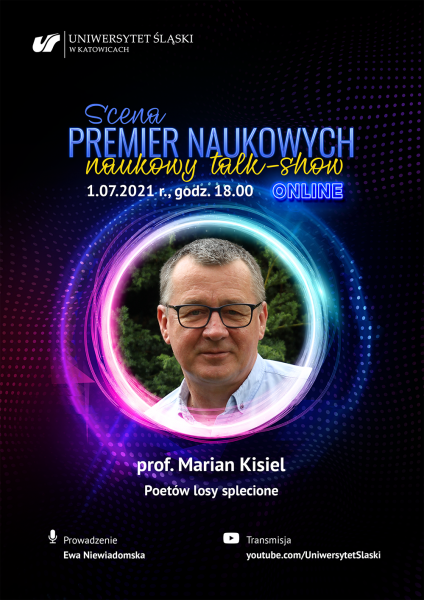