This site uses cookies
By using this website you agree to the use of cookies in accordance with the current browser settings.
Learn more Accept
Go to main content
COVID-19 security status
Level 0: no restrictions, basic health and safety at work rules
Coronavirus Statistics
home link Type relations Representatives of the University of Silesia with a visit to the Vytautas Magnus University in Kaunas

From 28 to 29 April 2022, the Lithuanian university celebrated its 100th anniversary. Among the invited guests were the representatives of the University of Silesia in Katowice – Małgorzata Myśliwiec, PhD, DSc, Assoc. Prof., (Project Coordinator for Transform4Europe) and Prof. Tomasz Pietrzykowski (Vice-Rector for International and Domestic Cooperation).

The celebrations began with a solemn session of the Senate of Vytautas Magnus University (Vytauto Didžiojo universitetas), chaired by the rector of the University, Prof. Juozas Augutis. Along with their wishes, the representatives of the University of Silesia handed over to Rector Prof. Juozas Augutis an occasional graphic prepared by the dean of the Faculty of Arts and Educational Science, Krzysztof Bąk, PhD, DSc, Assoc. Prof.

The participants of the event were invited to a ceremonial banquet. It was an opportunity to meet, talk and exchange scientific experiences. 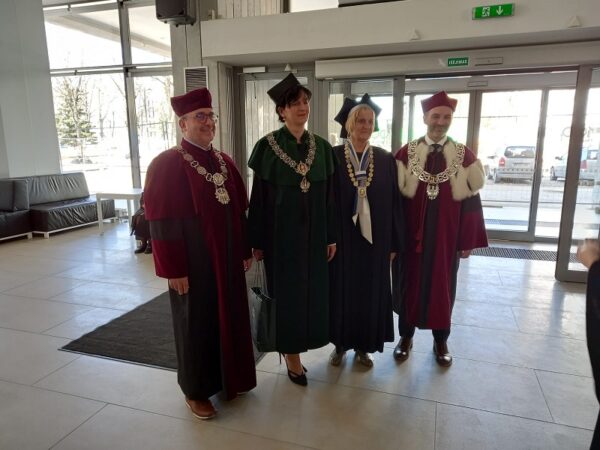