The word ‘bee’ is most frequently associated directly with the honey bee (Apis mellifera), a hard-working insect producing honey and pollinating flowers.

However, from the systematic perspective, it is a huge group of animals, which includes tens of thousands of species. A majority of bees are loners, only some form ‘societies’ and just few of them produce honey.

The bees which live alone are often referred to as solitary bees or wild bees/pollinators. This group includes e.g. red mason bees. Bumblebees are also classified as solitary bees, even though they do form small families. Many of these species perform very important functions in ecosystems – pollination of flowers is extremely important for maintaining valuable biodiversity. This is also essential for humans from the economic point of view, because fruits, seeds and fibres grow thanks to pollinators . For example, production of almonds, apples, blueberries and cotton would be much less efficient without bees, and in certain cases even impossible. Therefore, the Food and Agriculture Organization of the United Nations Organisation (FAO) estimated the contribution of bees in global economy at the level of USD 250 billion per year. And it is one species, namely the honey bee, which provides 80% of this contribution.

Research on the functioning of honey bees in cities has been conducted at the University of Silesia in Katowice since 2017. It is related to the increasing trend of introducing bee families in urban ecosystems. The previous research reports from many centres around the world mainly concerned the quality of bee products – honey, pollen and wax. In our case, we have been interested in the functioning of bees in the potentially unfriendly environment in itself. Initially, mainly the organism response to environmental stress was analysed and the condition of bee families was checked. However, due to the large interest from students of the Institute of Biology, Biotechnology and Environmental Protection at the University of Silesia, it was possible to extend the research by new aspects connected with microbiology, behaviour and physiology of bees, as well as pro-health properties of honey.

Most results of this research are currently being drawn up. So far, the conclusions correspond to the publications of other researchers, especially those concerning the great productivity of urban bees.

Out of concern for the bees, the University of Silesia has established cooperation with the Silesian Association of Beekeepers in Katowice. One of the effects of this cooperation was the organisation of International Beekeepers’ Congress in Cieszyn in March 2020, combined with an exhibition of equipment for beekeepers. The event resulted in establishing cooperation between the most important research centres in Poland for the purpose of publishing a scientific monograph by the University of Silesia Press. 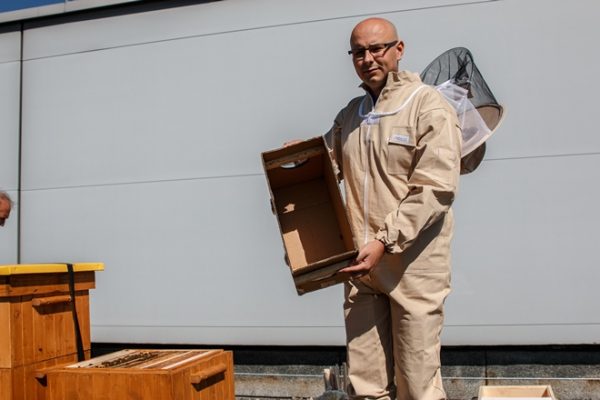