This site uses cookies
By using this website you agree to the use of cookies in accordance with the current browser settings.
Learn more Accept
Go to main content
COVID-19 security status
Level 0: no restrictions, basic health and safety at work rules
Coronavirus Statistics
home link Type articles “No limits” | The Architecture of Industrial Agglomerations

“No limits” | The Architecture of Industrial Agglomerations

From the beginning of the 19th century to the present day, Katowice has undergone many changes – social, economic, or related to nationality. The numerous buildings in the city are their testimony. The mining industry dominated the image of the capital of the Silesian Voivodeship for many years, but over time, modernist architecture began to spread around the city, and during the Polish People’s Republic, a few socialist realist objects appeared. Many of the former buildings can still be seen in Katowice – thanks to them, history is still alive, woven into the urban fabric. In her article, Maria Sztuka tells the story of the architectural metamorphosis of the city.

Numerous industrial cities developed in the 19th century. Although they cannot boast unique, centuries-old gems, they do not have to be ashamed of their architecture. An excellent example is Katowice, Silesia (southern Poland), which is only 156 years old. Although this city cannot compete with, e.g., 800-year-olds in terms of monuments, it impresses with its pace of development, momentum, and innovative urban solutions.

At the beginning of the 19th century, when Europe was driven by the Industrial Revolution, villages and agricultural settlements stretched across the future metropolis of Katowice, and the current districts were covered by dense forests interspersed with lazily flowing, picturesque rivers. Everything changed in 1838, when landowner Franz Winckler purchased Katowice’s knightly goods, transferred the management of his own goods there, and assigned supervision over them to Friedrich Grundmann, the overseer of the nearby Tarnowskie Góry mine. The best evidence of Winckler’s entrepreneurship is the wealth gathered by him, since the industrialist quickly became the owner or co-owner of 69 hard coal mines and 14 ore mines. With lightning speed, coal and metallurgical companies, offices, schools, and religious communes were established in Katowice, and this conglomerate stimulated the construction boom in the region.

“The city was established on two foundations: the mining industry (ore and coal) and the railways, thanks to which Katowice gained a connection to European cities, such as Berlin, Cracow, Vienna, and Warsaw,” recalls Dr. Aneta Borowik, art historian from the Institute of Arts Studies at the Faculty of Humanities of the University of Silesia and author of numerous publications on Katowice’s architecture and its creators.

When the decision on the route of the railway was made, Katowice did not yet have city rights. The same was the case when the first passenger train pulled in (August 6th, 1847), but the potential of the small village could be seen in the magnificent churches designed by German architects: Neo-Romanesque Evangelical church and Neo-Gothic Catholic church. The construction of the brick synagogue was completed in 1862. Katowice quickly embarked on the journey to obtain the status of a city.

Already at the beginning of the second half of the 19th century, architect August Nottebohm, commissioned by the Winckler family, drew up the first land development plan. According to the project, the city was to be built at the intersection of two roads running from north to south (from Mikołów to Królewska Huta and Bytom) and from east to west. Two representative spaces were then created: a market square and an octagonal square (now Plac Wolności, i.e., “liberty square”). Along the main streets, whose current names are Warszawska and 3 Maja, palaces of rich industrialists and glamorous villas surrounded by gardens began to appear, which, as the art historian emphasizes, became the city’s distinctive feature. The exterior design of the buildings was dictated by the fashion of the time – in the 1840s, the most popular styles were Neo-Renaissance and Neoclassicism of Berlin provenance, preferred by both industrial tycoons and wealthy apartment building owners. When Katowice obtained city rights on September 11th, 1865 it had almost 5,000 residents; 35 years later, this number increased sixfold, and in 1939, over 134,000 people lived there.

New constructions had to keep pace with the rapid population growth. As a result of the process, bourgeois villas located away from the city center multiplied. The showpiece of the city’s splendor was, among others, the Neo-Renaissance-style Goldstein Villa built in 1872 at Plac Wolności (nowadays Pałac Ślubów, i.e., “wedding palace”), whose exterior elevations are decorated with rich ornaments and stonework. The streets near Rynek (i.e., “market square”, today: Adama Mickiewicza, Piastowska, Stanisława Moniuszki) were filled with apartment buildings whose architecture reflected the tastes of their owners, hence the variety of styles: from Neoclassicism through Neo-Renaissance to Neo-Baroque, Art Nouveau, and eclecticism, an example of which is the building at the corner of Stawowa and Adama Mickiewicza streets. In the 1840s, those were one- or two-story family buildings, but over the years they were transformed into multi-story apartment buildings. The city’s prestige was raised by the early Modernist and neoclassical theater building (1907). The spatial development was hindered by the limited territory, since even a part of Wojciecha Korfantego avenue, the present- day city center artery, was already outside the city. 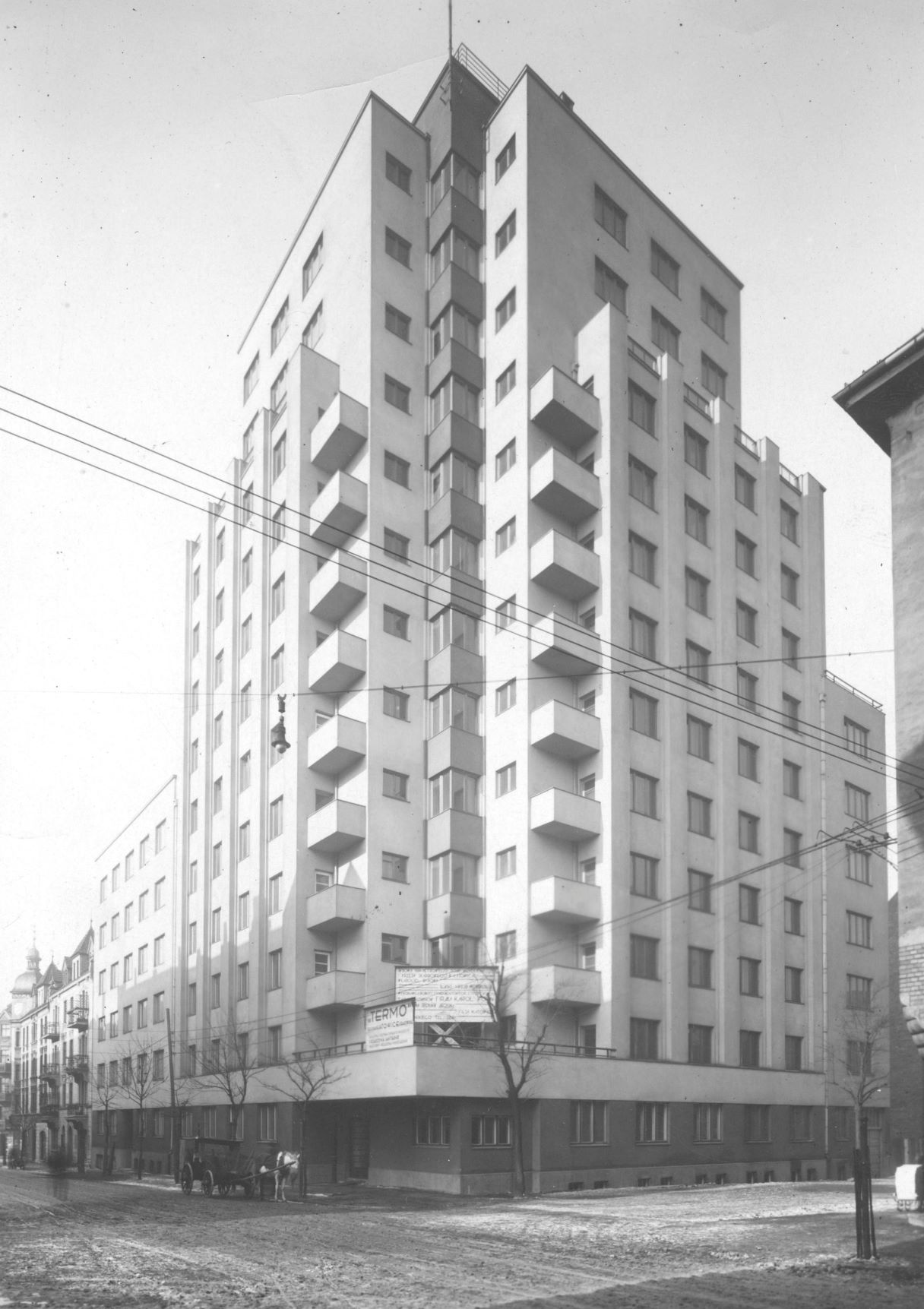 In 1922, Katowice was incorporated into Poland and became the capital of the Silesian Voivodeship. At that time, the city began to grow dynamically, and numerous Modernist public utility buildings were constructed. August Nottebohm’s concept was no longer useful when the territory of Katowice began to expand.

According to Prof. A. Borowik, the railroad line, which was a boon for the city and its residents, became a serious problem for architects when planning new buildings, since it was located close to the center and divided it into two parts. The “natural” city border was crossed already in the 1880s, and thus new space for development in the areas of the following contemporary streets appeared: Wita Stwosza, Jagiellońska, Jana Kochanowskiego, and Tadeusza Kościuszki. In the first decade of the 20th century, these areas were parceled out and developed in a new style.

“At that time, there was a fashion for the so-called ’International Style of 1800‘, which was based on a combination of German Traditionalism with elements of Classicism and Neo-Baroque. In Germany, this style was considered native, national. Examples of this style in Katowice include the apartment buildings at today’s Tadeusza Kościuszki, Jana Kochanowskiego, and Wita Stwosza streets, which can be admired until today. At the beginning of the 20th century, monumental administrative edifices were erected (including the Silesian Voivodship Office, the Silesian Parliament, and the Independent Offices) as well as luxurious apartment buildings, e.g., at PCK, Marii Skłodowskiej-Curie, and Józefa Rymera streets. As a result, Katowice can be proud of Modernist buildings from the interwar period, distinguished by their modernity,” the art historian emphasizes.

Although the city’s heavy industry hampered the builders’ momentum (most of the land in Katowice belonged to private owners, and underground extensive coal mining was going on too), the first Polish skyscraper (1930), the first artificial ice rink Torkat (1930), and the ultramodern Palace of Technology, i.e., the Silesian Technical Academic Works (1928), were built in the capital of the Silesian Voivodeship during the interwar period. Dozens of similar objects can still be found in Katowice.

The working-class districts looked much worse, since they were dominated by the outdated familoki, as the typical houses for many families, designed for workers of the coal industry, are called in the Upper Silesia. On the city’s outskirts, an increasing number of bootleg mining pits and mud huts began to appear. In 1929-1933, poverty was made particularly apparent by the Bederowiec intervention housing estate (today: Osiedle Tysiąclecia, i.e., “millennial district”), built in 1934 on the initiative of the city authorities as part of a social program. In order to alleviate the living conditions of the poorest, blocks with one-room apartments with shared toilets outside were erected.

After 1945, the city became the capital of the Silesian Voivodeship with priority significance for the Polish economy. Its downtown had to reflect the fact that Katowice was the main city of the region, which generated 80 percent of the national income. In 1949-1956, Socialist Realism became the leading idea, and all development plans had to correspond with the only creative method considered valid.

“During that time, urban planning was in full swing, and because socialism assumed egalitarianism, urban spaces had to meet the criterion of mass compliance and serve all people for huge gatherings, shopping, and entertainment. Thus, new space was to be created for these purposes. The 1945 market square fire, which destroyed the southern frontage, supported the new plans and cleared the way for the demolition of the rest of the eclectic townhouses. The main square of the city tripled in size and was opened up along its entire width to the current Wojciecha Korfantego Avenue, which, thanks to a considerable expansion, became a monumental axis designed already in the 1950s, at the time when the doctrine of Socialist Realism was strictly adhered to.

New buildings were erected in huge numbers, quickly, and on a grand scale, in line with the directives of socialism. During that time, several icons of post-war architecture were created, including the Spodek (i.e., “saucer,” so called due to its shape) Sports and Entertainment Arena (1971), Osiedle Tysiąclecia (i.e., ”millennial district”) (1961-1982), the famous Gwiazdy (i.e., “stars,” so called due to the ground plan of an eight-pointed star), and the Walentego Roździeńskiego housing estate (1970-1978). In 1972, a new railway station was built in Katowice with a unique chalice structure, which made it one of the most outstanding Brutalist buildings in Europe. The huge and modern Zenit and Skarbek department stores appeared in the city’s very center. These are just some examples from a long list of new investments.

After 1989, the concept of a city previously associated almost exclusively with heavy industry was abandoned. After its restructuring, Katowice, which aspired to the title of the European Capital of Culture, became a city of gardens, music, and science. The architecturally stunning edifices of the National Polish Radio Symphony Orchestra, the Silesian Museum, and the International Congress Center were built there, but this is the beginning of a completely different story.

“Paradoxically, we are replacing late Modernism with contemporary… new Modernism,” Prof. Aneta Borowik concludes. “Honestly, good architecture of the 1960s and 1970s is slowly dying out, and only thanks to the enthusiasts with their photographs and published studies, it can be saved from total oblivion.”

The article “The Architecture of Industrial Agglomerations” was published in the University of Silesia’s popular science magazine „No Limits” no 1(5)/2022.