We mostly associate Virtual Reality with entertainment, however, it is more frequently mentioned in the context of various therapies. Scientists from the University of Silesia designed special games for rehabilitation which make use of VR technology. They are intended for patients needing permanent or temporal rehabilitation of the human musculoskeletal system, with post-traumatic problems as well as neurological, rheumatological, and orthopedic conditions. 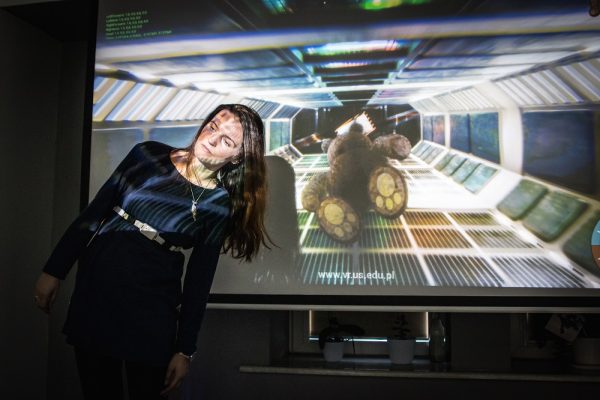 The person undergoing rehabilitation embodies the main protagonist of a game. For instance, they try to avoid certain obstacles, collect honeycombs, reache out for apples in an orchard, or move between parts of a spaceship. In order to achieve the goal of the game, they must adapt the position of their hands, legs, or even of the entire torso. This is possible due to the use of non-invasive motion sensors which are placed on different parts of the patient’s body. The plot of the game is designed in such a way that the patient must make precisely defined movements in order to provide exercise for specific body parts.

One the numerous advantages of these rehabilitation system is the fact that movement therapy can be personalized. In cooperation with scientists, physiotherapists and doctors can determine the type of necessary exercises, the number of repetitions, the scope of movement as well as its duration. What is more, the system also monitors the functioning of specific body parts so that it is possible to determine whether the exercises were correctly performer.

Another advantage is the fact that the game plot can be designed for target groups of different ages, such as children or the elderly.

– For example, younger patients can embody the flying bear Misiolot or the running bear Misiobieg who, depending on the scenario, either runs and collects honey or flies between various modules of a spaceship, says Dr. Paweł Janik, coauthor of the experimental project.

The scientists also expect to distract the patients attention from the pain which could impact rehabilitation efficacy. There are numerous indications that patients concentrating on the goal of a game can more effectively follow the schedule of their physiotherapy. However, they must be permanently supervised by their specialists. The developed rehabilitation games are discussed with doctors and physiotherapists. The devices’ production costs are also taken into consideration.

– When designing our innovations, we try to take financial factors into account. In the case of a rehabilitation game, we are talking about three elements: the sensor, the router, and an additional device which will receive and transform signals emitted in the system. It can be e.g. a standard computer, the scientist comments. – We also improve specific solutions so that the system can work with increased efficacy and efficiency.

Dr. Paweł Janik’s team also work on other new solutions on the field of biomedical engineering.

Among others, the scientists developed a breathing monitor which is to prevent Sudden Infant Death Syndrome (SIDS). Such a device checks on such aspects of breathing as frequency and strength, heart rate, and changes in the position of the child’s body. One of the experimental solutions employed in the breathing monitor was awarded e.g. at the 47th International Exhibition of Inventions Geneva 2019 and at the 44th International Exhibition of Inventions “Inova Croatia 2019”.

The scientists are also the authors of a solution supporting pulmonary rehabilitation. They also developed a special game which monitors whether children inhale correctly. The game also makes the process, which may even take several minutes, less bothersome for the young patient.

Another equally interesting project is the oscillating vest. This technically sophisticated product, which supports the clearing of the respiratory tract in patients with conditions causing mucus to accumulate in the lung. The size of the device can be adapted to particular target groups, such as children. For a proper functioning of the vest, the control technology must be attuned to the mechanical elements of the specially designed textile structure.

It is expedient to add that Dr. Paweł Janik’s team not only devise all electronic and mechanical elements, but also bear in mind the design aspect of their devices.

The article entitled ‘Experimental projects supporting rehabilitation’ was published in ‘No Limits’, no. 1 (1) in 2020.

Dr. Paweł Janik
Institute of Biomedical Engineering
Faculty of Science and Technology at the University of Silesia
pawel.janik@us.edu.pl