This site uses cookies
By using this website you agree to the use of cookies in accordance with the current browser settings.
Learn more Accept
Go to main content
COVID-19 security status
Level 0: no restrictions, basic health and safety at work rules
Coronavirus Statistics
home link Type articles “No Limits” | City as an ecosystem and its green infrastructure

“No Limits” | City as an ecosystem and its green infrastructure

Concrete cities are the bane of modern urban planning. They embody ugliness and disturb the local ecosystem. In many towns and cities in Poland and around the world, projects are increasingly being undertaken to restore the greenery in squares and streets. Numerous metropolises are letting more nature back in. Weronika Cygan writes in her article why it is essential for us to live in green cities and how this can be achieved at a small cost.

Edyta Sierka, PhD, DSc, Associate Professor from the Institute of Biology, Biotechnology and Environmental Protection of the University of Silesia and the Polish Green Roofs Association –
edyta.sierka@us.edu.pl

What do Stockholm, Hamburg, Nantes, Copenhagen, and Tallinn have in common? All these cities were awarded the title of the Green Capital of Europe by the European Commission. However, for a city to be considered truly ecological, a few green roofs or walls are not enough. 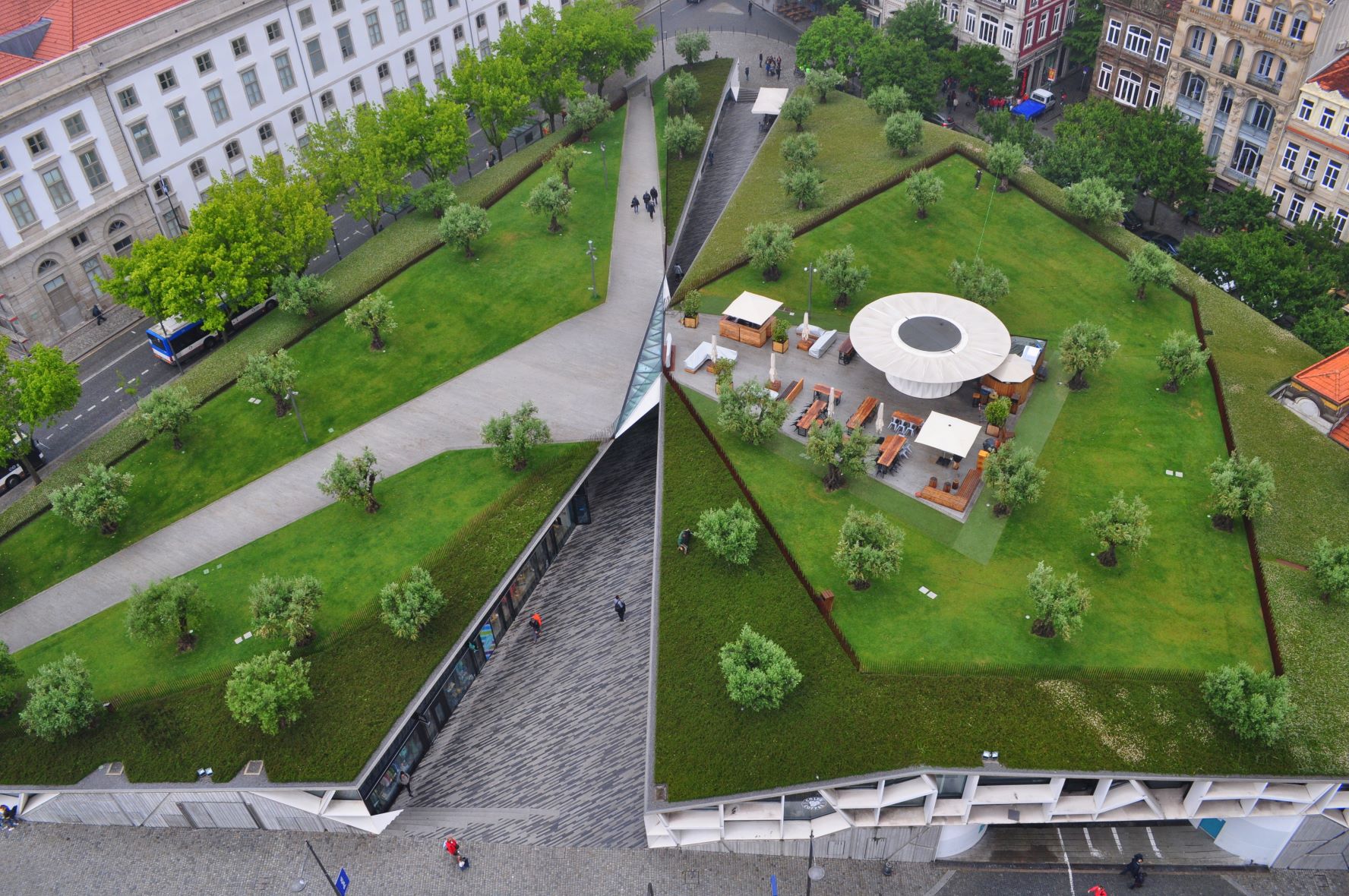 “Our understanding of ‘green infrastructure’ is flawed,” emphasizes Assoc. Prof. Edyta Sierka, biologist from the Institute of Biology, Biotechnology and Environmental Protection at the Faculty of Natural Sciences of the University of Silesia. “Most often we mean everything that was created by humans, somehow ignoring the elements created in a spontaneous manner. In addition to gardens tended by residents and trees planted along roads, we should also consider in this context ‘extras‘ in the form of areas where extremely diverse clusters of plants form on their own. The pressure of nature is visible wherever there are conditions for plants to spring.”

The idea of a green city itself is nothing new. As early as 1898, British urban planner Ebenezer Howard proposed the concept of garden cities. Their dispersed infrastructure was to operate on the basis of zones performing specific functions, including the provision of services or recreation. Such a city was also supposed to be green, with arranged urban greenery surrounding residential buildings and industrial plants. In Poland, one of the first completed investments in the spirit of Howard’s garden cities was Milanówek near Warsaw.

Contemporary metropolitan revitalization and urban planning are in fact a step back to the roots and old ideas, but in a modernized and improved version. Flower meadows are becoming increasingly popular in cities, as they not only are an eye-catcher, but also support biodiversity, which positively affects the entire urban ecosystem. Something similar applies in the case of green roofs, which are often a visual feast and at the same time perform numerous practical functions. Building such roofs is currently one of the most effective ways to curb the increasingly severe effects of climate change. They are also perfect as a thermal insulation layer in buildings – a much better alternative than traditional air conditioning, which consumes huge amounts of energy and money. Installations of renewable energy sources, such as solar roofs, as well as water retention places in land depressions or pocket gardens, are also located in the immediate proximity of such roofs.

Gradually, we are beginning to understand our mistakes in urban planning. Besides the obvious fact that concrete markets and housing estates look ugly, they also disturb the water balance of the city’s ecosystem. This can be seen in the increasingly frequent flooding, when water does not find an outlet after a large and sudden rainfall and uncontrollably flows in the streets and walkways. On hot days, the same concrete square is like a hot frying pan, and the situation is not improved by water curtains placed every few dozen meters to cool the overheated passers-by. Such a simple measure as planting trees in the city center could help reduce the perceived temperature by providing soothing shade or shelter from gusty winds. 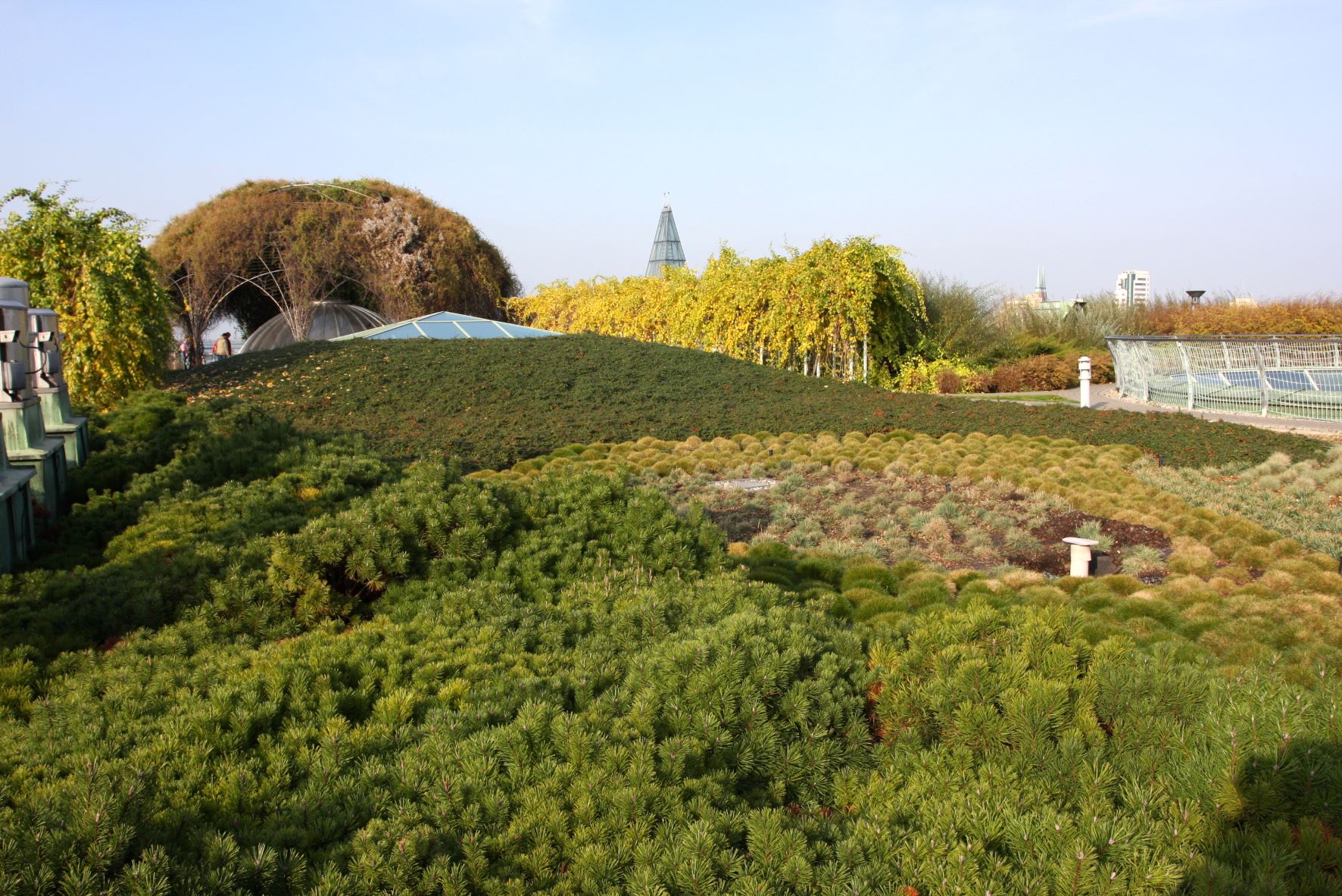 Roof of the University of Warsaw Library | Photo by Agnieszka Sikora 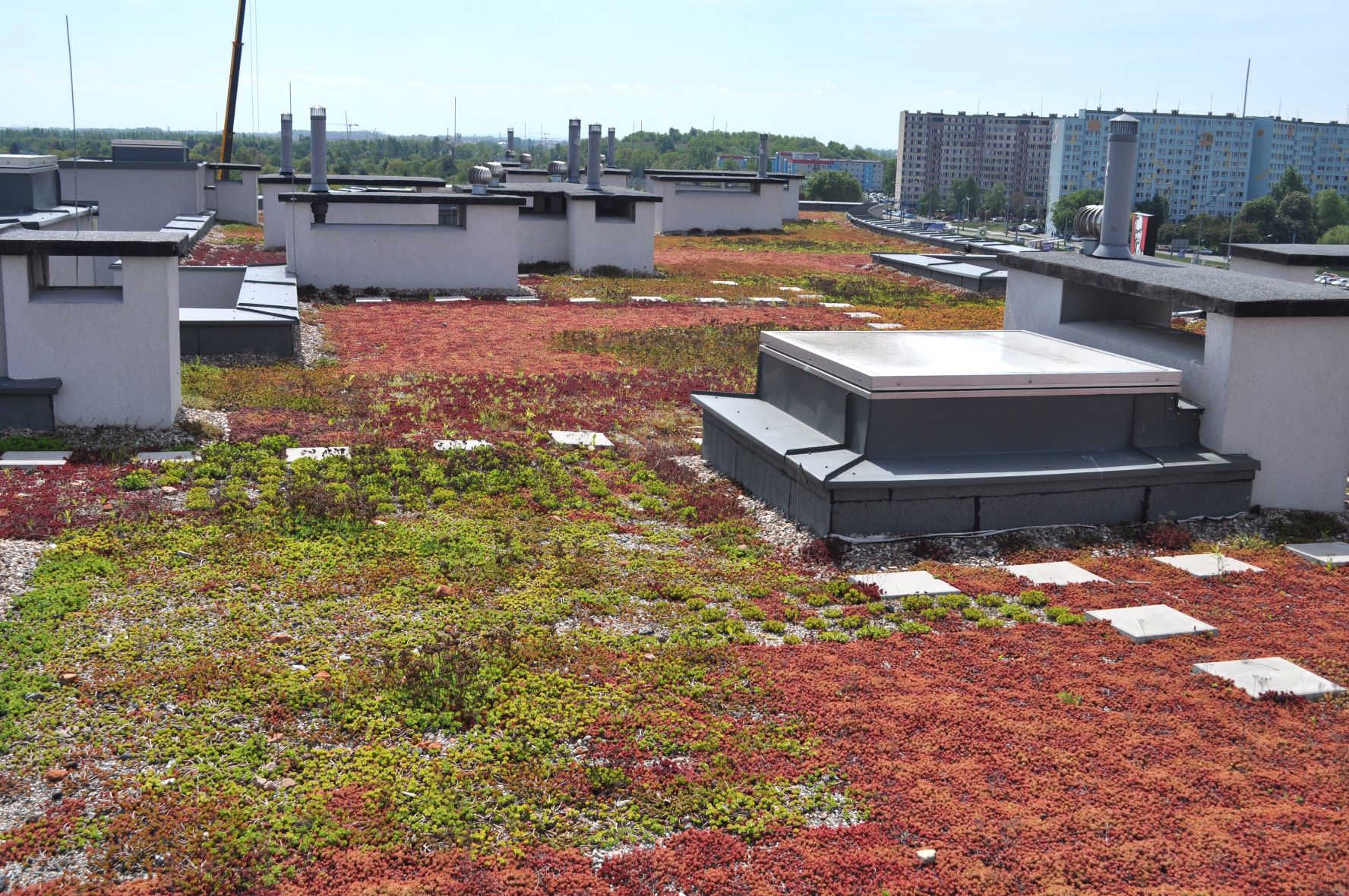 Sedum roof on a multi-apartment building in Wrocław, Poland | Photo by Marta Weber-Siwirska

“Basically, we don’t have to do everything from scratch,” Prof. Edyta Sierka remarks. “Suburban areas in Poland usually have garden plots, and they became even more popular during the pandemic, since everyone wanted a place for themselves to breathe fresh air and be in the midst of nature. In such gardens and on private properties, it is possible to take care of the preservation of urban biodiversity through such simple measures as not mowing the lawn (or heavily reducing this activity), setting up bird feeders, or putting up the so-called bee hotels (hospitable not only for bees). For those who do not have their own plot, community gardens can be an alternative, as they are open to residents to join forces and grow a variety of plants together.”

The city is an ecosystem that differs slightly from the “traditional” ones in terms of natural processes. As a relatively recent phenomenon, it is devoid of stability in the form of food chains established over thousands of years, provided to us by forests, mountain areas, lakes, and seas. What is attractive about the city for humans (and all living organisms, for that matter) is the fact that the buffet here is open 24 hours a day and year-round. Even when snow falls in the winter, tough animals are able to dig for scraps abandoned in dumpsters or take advantage of the offerings available at feeders refilled by kind Homo sapiens individuals. As a rule, it is also warmer in cities, which favors a longer breeding period for animals and a more extended vegetation period in case of plants.

It is worth remembering that the presence of a city’s animal inhabitants is not always as obvious as in the case of an impertinent magpie trotting on the windowsill or a wild boar popping into the garden, whose visit we can infer from the “plowed” lawn. More than once, we may have unconsciously walked over an ant colony, as this species feels quite cozy under the paving slabs. A certain species of ant known as Lasius niger, which can also be found in mountainous areas, has taken a liking to cities where it feels as comfortable under concrete covers as it does around rocks. The attractive companionship of humans, who tend to inhabit increasingly large cities, has caused many animals to permanently relocate to our metropolitan areas to obtain food and find a mate more easily. Such species, called synanthropes, have adapted well to an environment transformed by humans. They include tits chirping eagerly under our windows or cooing pigeons as well as less graceful animals, such as spiders or cockroaches. In New York City, no one is particularly surprised anymore to see a raccoon running from dumpster to dumpster. Likewise, in New Delhi, it is now common to see a herd of rhesus monkeys jumping on buildings.

“Cities that exhibit very high biodiversity and green space ratios are also the ones most often identified by independent bodies as those where people feel most at home. This is important because it shows how much humans are connected with nature. Where there are few green elements, our quality of life significantly decreases,” emphasizes Prof. Edyta Sierka. The researcher mentions the increasingly frequent diagnosis of nature deficit syndrome in children and adolescents, and points to the necessity of investing in green cities. 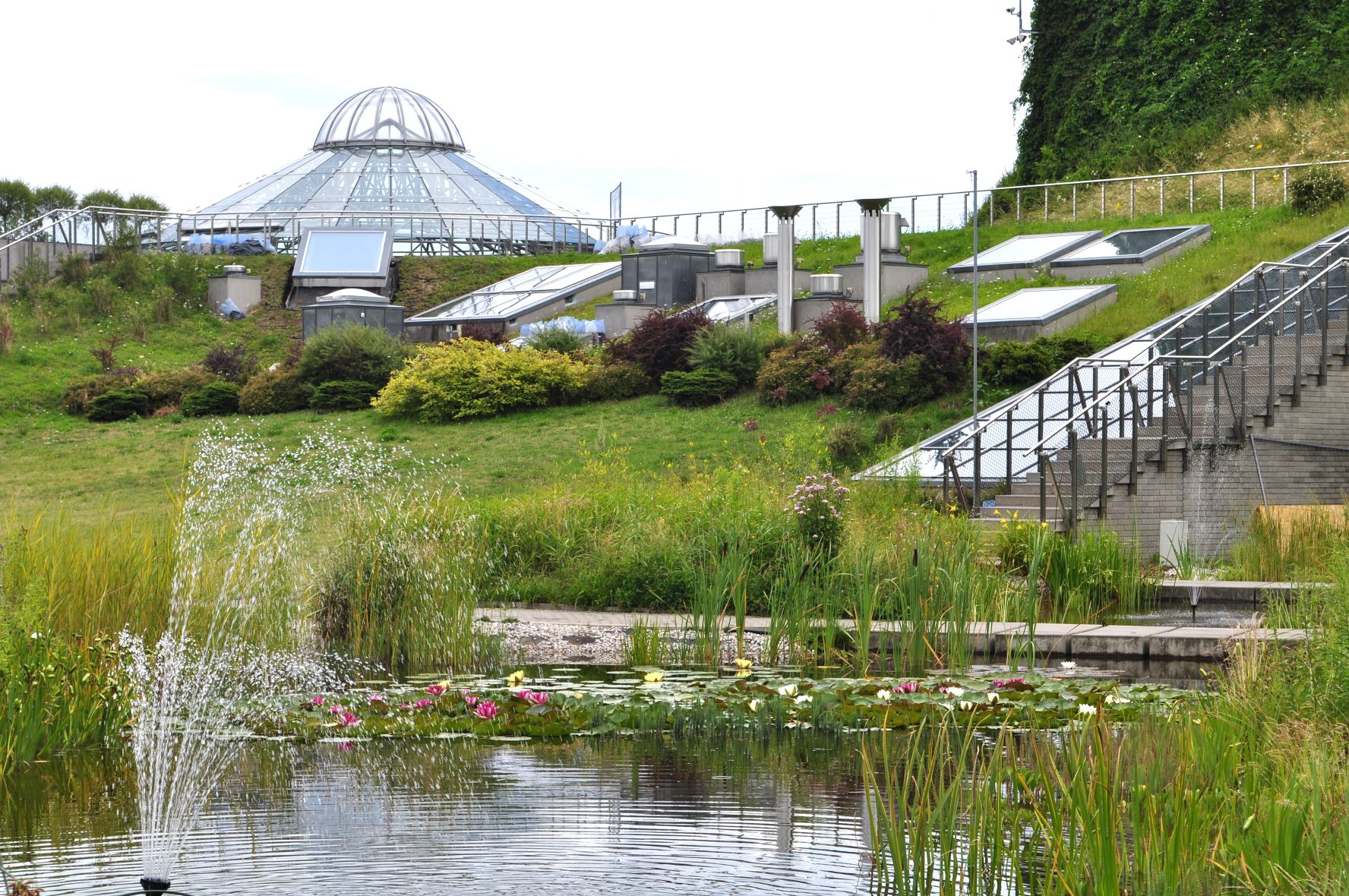 Roof of the Podlasie Philharmonic Orchestra in Białystok, Poland | Photo by Marta Weber-Siwirska 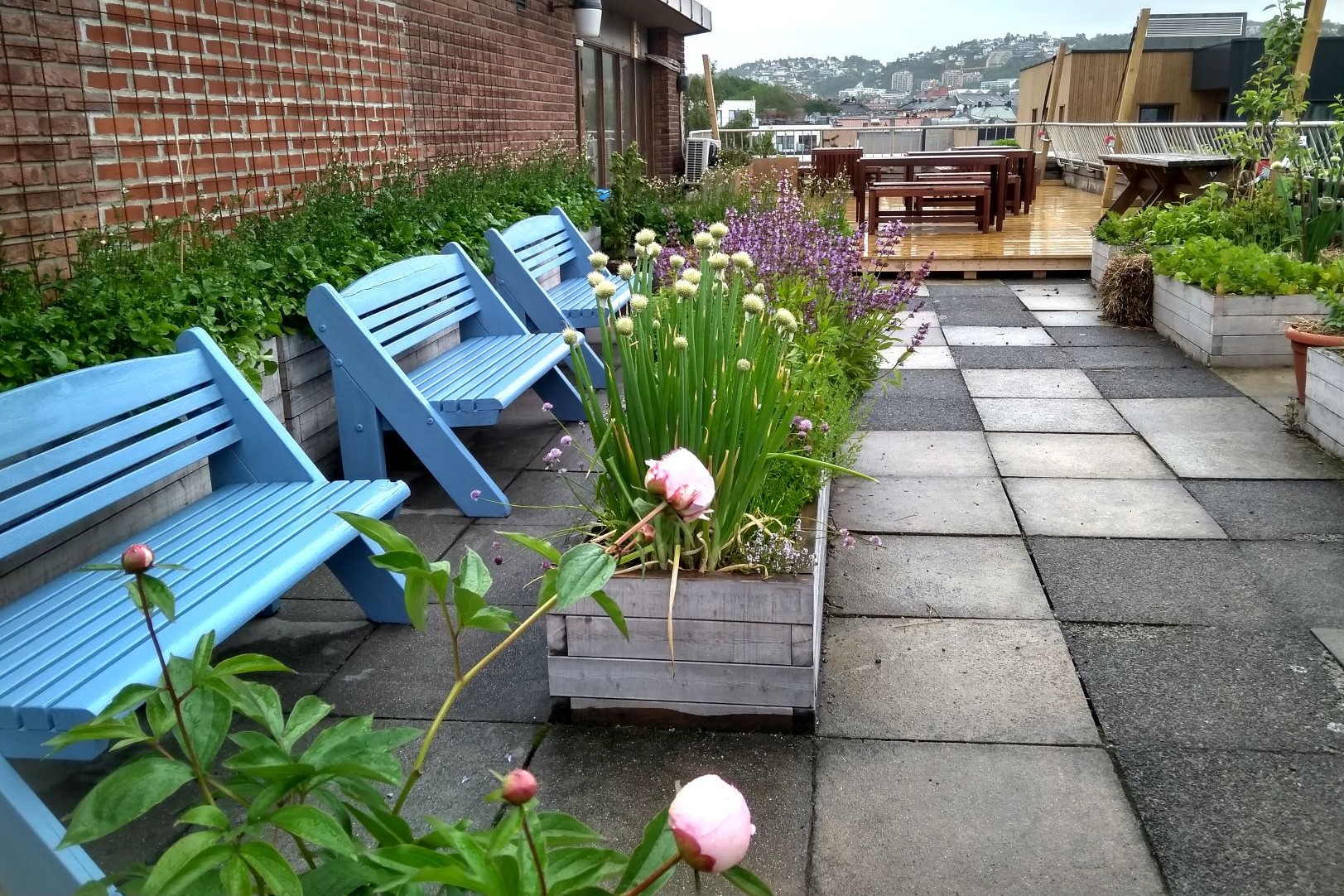 Urban planners continue to invent and implement new ways to force us to have more contact with nature. One of them is the concept of “a quarter-hour city.” According to it, we should be able to take care of all the necessities in our life within 15 minutes. It should not take longer to get to the store, doctor, school, or work, and it is desirable to ensure that the residents pass a park or at least a few larger trees along the way. Green infrastructure also focuses on green transport. Of course, the best way to move from place to place is on foot or by bike in order to exclude cars from the strict city center. Moreover, public transport should make use of electric vehicles. Reykjavik is present in many rankings for the greenest cities, and thus, it is not surprising that hydrogen busses roam its streets using this modern energy source.

Asian metropolises can boast even greater dedication to the creation of green infrastructure, as their projects feature the latest technological advances, including genetic engineering. Plants enriched with the DNA of proper bacteria can fight contamination more easily, and some even gain the ability to emit light. It is sufficient to look at Singapore where the botanical garden looks like a piece of jungle transplanted into the middle of a city. It is not only a place where locals can breathe fresh air and relax, but it attracts tourists like a magnet. An increasing number of people are realizing the potential of greenery in tourism. Thus, for instance, Central Park is one of the spots that every visitor of New York definitely wants to tick off their list. The story of its creation is also an example of how a neglected space can be transformed into something that attracts crowds of people.

Such practices are also quite common in Europe, as made apparent by the 2014 European Green Capital – Copenhagen. One of its neighborhoods, built on a former harbor site, was redeveloped and powered entirely by renewable energy. Stockholm, the Green Capital of 2010, followed a similar path. These ventures were co-created with city residents while incorporating Nature-Based Solutions (NBS). They are now the basis for planning in smart cities that invest in green infrastructure.

Nature is an excellent service provider and really does not need much from us. Its most important requirement is that we do not disturb it by erecting more barriers or harm it with constantly emitted pollutants. So let us invite nature into our cities in different places, under different forms, and thus we will ensure not only views that soothe our senses, but also provide for a healthier and safer environment.

The article entitled “City As An Ecosystem And Its Green Infrastructure” was published in “No Limits” no. 1(5)/2022, the popular science journal of the University of Silesia.