This site uses cookies
By using this website you agree to the use of cookies in accordance with the current browser settings.
Learn more Accept
Go to main content
COVID-19 security status
Level 0: no restrictions, basic health and safety at work rules
Coronavirus Statistics
home link Type articles „No Limits” | Global warming is speeding up

„No Limits” | Global warming is speeding up

On 18th August 2019, when Europe was being scorched by a record heat wave, in Iceland, in the vicinity of Reykjavík, a symbolic “burial” of the Ok Glacier (Okjökull) took place. Iceland’s Prime Minister Katrín Jakobsdóttir participated in the farewell ceremony, alongside numerous government and UN representatives, scientists, and journalists. In the bare rock where the glacier once throned, a plaque containing the following message to the future was installed: Ok is the first Icelandic glacier to lose its status as a glacier. In the next 200 years, all our glaciers are expected to follow the same path. This monument is to acknowledge that we know what is happening and what needs to be done. Only you know if we did it. 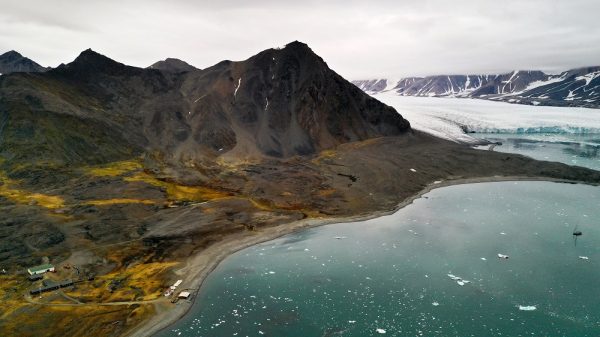 Record heat and disappearing glaciers are the consequence of climate change and confirm the trend towards global warming which, according to scientists, is constant and has unfortunately sped up. Observation and research of glaciers, the Earth’s biggest freshwater reservoir, are becoming an indispensable source of information regarding the current climate change in the polar environment, and thus indirectly on the entire planet. The Svalbard Archipelago and its glaciers around the Hornund Fjord constitute something which could be called a researcher’s laboratory, since it is a place which very strongly reacts to changes in the environment and therefore serves as a model region for processes taking place on a global scale.

Polish explorations of the Arctic began in 1932 with the Poland’s first expedition to Bear Island on the Barents Sea and gained momentum after the Polish Polar Station was established at the Hornsund Fjord in 1957. After its renovation in 1978, it has remained open throughout the entire year. It is also the place where scientists working for the Institute of Earth Sciences at the University of Silesia do their research.

Jacek Jania, Professor at the same Institute, said the following regarding their work: “In a sense, they are ahead of our times and set the newest trends in Arctic research.” Professor Jania is a researcher of glaciers and the Polar environment, head of the Centre for Polar Studies US, and a member of the European Polar Board. – We belong to the pioneers of modern glaciology in the Arctic. Our work began in 1977, on the south of Spitsbergen, the biggest island of the Svalbard Archipelago.

Systematic glacier studies by expedition members working for the University of Silesia have yielded numerous and innovative results. The most important ones pertain to the reaction of glaciers to climate warming and their influence on the climate in their surroundings. The team from the Institute of Earth Sciences, who collaborated for the Centre for Polar Studies US with the Institute of Geophysics and the Institute of Oceanology of the Polish Academy of Sciences as well as with numerous other partners from various countries, studies glaciers terminating into seas. They are not only the biggest glaciers, but also the most numerous ones, since they constitute more than 65% of Svalbard’s ice covering and have the most significant impact on their sea and land surroundings.

The most important and best-studied of them is the Hans Glacier. In the last two decades, the Hornsund Fjord has increased its volume by 3 km2 at average per year, a fact caused by the recession of glaciers terminating into seas. Constrained glaciers recede less rapidly, since their icy cliffs do not break off into the sea. Accoring to the results obtained by the University of Silesia research team, an accelerated deglaciation occurs with climate change. Its intensity is three to four times bigger than the rise of temperatures in Central Europe (+1,2°C/10 years for Hornsund, Norway; +0,4°C/10 years for Katowice, Poland).

Smaller glaciers “die” less spectacularly than the big ones which terminate into seas. They disappear relatively less quickly, since they contain smaller masses of ice. Professor Jania adds that some of the small mountain glaciers are almost dead, as they do not exhibit an important attitude of glaciers – the movement caused by the force of gravity.

Numerous glaciers of the world, including a very big number of Svalbard’s glaciers, is characterized by an unstable flow of ice from the area where snow accumulation mainly occurs to the tongue and to the head. This sudden acceleration of movement is called surging. It happens around every dozen or several dozen years and causes the glacier’s rapid advance. The population of surge-type glaciers on Svalbard is very numerous.

Currently, the Silesian scientists are testing the following hypothesis: a warmer climate → slightly increased snowfall in the lower parts of glacier valleys → a faster filling of the reservoir → more thaw water (and rainwater) → the waters reach the glacier’s foundation → a higher chance that a surge occurs. Due to the fact that the glacier’s general volume diminishes, each surge is smaller than the previous one. The “quiet” periods of surges between their active phases also appear to be increasingly shorter. As a result, huge ice masses on Svalbard disappear and “die” in the surge’s convulsions, whereas small mountain glaciers become dead incrementally, without any spectacular phenomena. The warming of Svalbard’s climate causes an increased number of glacial surges. The underlying mechanism could be that a warmer climate results in more thawing, larger quantities of thaw water enter the ground, and thus the glacier skids with higher velocity.

Glaciers terminating into the sea are most likely to be affected by rapid and significant loss of mass due to surges, and the glaciologists from the University of Silesia specialize in research pertaining to them. The glaciers monitored on Spitsbergen are models of what is happening in regions which are more difficult to study, such as Greenland.

Can phenomena occurring more than 3,000 kilometers away constitute a threat to the inhabitants of Central Europe? The mechanism of an accelerated movement of ice from the land to the sea, resulting from a surge’s “convulsions”, and an increased melting of glaciers cause a slow rise of global ocean levels. This applies to the Baltic Sea as well. “Svalbard’s glaciers are too small to threaten our beaches and harbors,” assures Prof. Jania, “but a similar loss of mass from Greenland and West Antarctica are a real danger not only to the Netherlands, Florida, Bangladesh, and the low Pacific atolls, but also for all regions with low- level beaches, including the depressions of the Żuławy Wiślane, the Szczecin region, and other areas close to the sea,” warns the glaciologist.