The image of post-mining heaps is permanently inscribed in the landscape of Silesia. The landfill, which is not easy to hide, is created by human mining activities and is saturated with many compounds that are toxic to both humans and the environment. It turns out, however, that there are microorganisms that can handle the extreme (from our point of view) conditions quite well. They are being studied by a team led by Piotr Siupka, PhD, as part of a project selected through the Research Excellence Initiative call for proposals “Green Horizon”.

“I have the opportunity to work in a very interesting region of Poland. Heavy industry has led to the fact that here, in Silesia, we can find unique environmental laboratories. I’m talking about mining heaps. Although burdensome for residents, for us, scientists, they turn out to be extremely interesting.” Says Piotr Siupka, PhD, leader of the project “The structure and biotechnological potential of the microbiome of burning post-mining heaps”.

The availability of these interesting areas are what caused the young scientist to return to Poland from Denmark after completing his postdoctoral fellowship and decide to take up a new research topic in the field of microbiology of environments related to bituminous coal.

“I have long been interested in issues related to life in extreme environments. The environment of the heaps is perfect for conducting this type of research.” admits the microbiologist.

These are places of extreme conditions. These usually contain a lot of toxic substances, such as heavy metals, phenolic and chlorophenol compounds, or polycyclic aromatic hydrocarbons. They are a threat to both humans and the environment. Moreover, it is not a homogeneous structure. The scientist explains that organic matter is often found in the rock material in the heaps, and often also pyrite, a compound of sulfur and iron that begins to oxidise and emit a lot of heat. When there is more and more of it, it is enough for the heap to start… burning.

Contrary to appearances, as a result of the above-mentioned processes, one cannot talk about spectacular images of a mountain of living fire, like from science fiction movies. Everyone who lives in Silesia knows that burning heaps are easy to recognise, thanks to the smoke rising above their surface.

One must admit that Piotr Siupka, PhD, selected one of the environments most unfavourable to any organisms for the analysis. The heap itself, precisely due to the fact that it contains so many toxic substances, is a hostile place for all fauna and flora. In addition, in the place where the ignition occurs, all boundaries for life are exceeded.

Such a heap is spot-burning. Sometimes it lasts for several months, sometimes several years. Fire can also travel across the heap.

“In the team that I have the pleasure to lead, I work with, among others, Prof. Leszek Marynowski and Ádám Nádudvari, PhD. They mainly deal with the analysis of the geochemical composition of the heap and the processes taking place in it. However, I am interested in microbiology. Our common goal is to describe the biogeochemical processes taking place in burning post-mining heaps by studying the microbiome of these environments. The project also plans to isolate microorganisms from heaps and assess their biotechnological potential.” Comments the scientist. 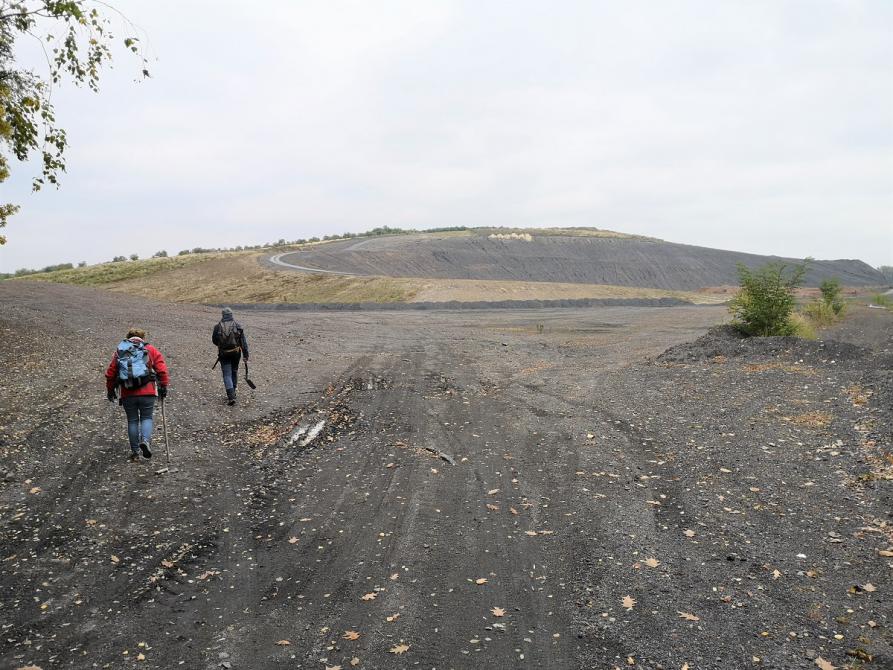 Inhabitants of the heaps

Researchers already know a little about the microorganisms inhabiting the post-mining heaps. This group certainly includes various strains of bacteria that have been able to adapt to extreme conditions.

“One of the key questions is which of them were previously in the rock material and were simply ‘extracted’ to the surface of the earth with it, and which colonised the newly created space.” Says the microbiologist. This is a very interesting question, which is why comparative research is such an important part of the project. Scientists have at their disposal both material taken directly from the heap, as well as from mines from various depths.

Both types of bacteria can function quite well under extreme conditions. The organisms that were extracted along with the dredged material had to adapt to the external environment. In turn, those from the outside do very well in the toxic environment. While the presence of the former is understandable, it is worth considering what prompts the latter to settle in the heap, despite the fact that there are much more favourable conditions for life within easy reach.

“It’s a difficult question. The simplest answer for both of the groups is probably this: because they can. Some bacteria have mechanisms that allow them to do well, whereas others might not survive. And they don’t have to worry about any competition. The nearby areas, characterised by more favourable conditions, will attract many more, and that is quite a competition.” Explains the microbiologist.

In the case of burning heaps, the high temperatures, there is also a big challenge for microorganisms. As the scientist explains, the theoretical limit at which we can still talk about the occurrence of any reproductive life form is 125°C. Meanwhile, in the case of burning heaps, the temperature of the material can reach even several hundred degrees Celsius at their surface. No microorganisms can be expected in such places.

Bacteria are fascinating because they have the greatest metabolic flexibility, which allows them to adapt relatively quickly to a wide variety of conditions, including those as difficult as those found in heaps.

Scientists are currently trying to isolate and sequence the DNA of microorganisms from the collected samples, which turns out to be quite a challenge due to the accumulation of heavy metals and various organic compounds. On this basis, they will be able to answer, inter alia, what microorganisms live in burning heaps in places where the temperature does not exceed the assumed 125 °C. They would also like to see what they can do in such an extreme environment.

“This is a very important question because I believe that in the future they will be used as sources of new enzymes or will be used to remove various types of contaminants, possibly including the bioremediation of the heaps themselves.” says the scientist.

The main place of research is a heap in Czerwionka-Leszczyny. Both points with ongoing fire and burned-out places appear in this heap.

“We want to compare them with each other because they are different environments in which different microorganisms live.” adds the team leader.

The team of Piotr Siupka, PhD was joined, among others, by Ian Marshall, PhD from Aarhus University (Denmark). The biologist from Australia participated in the works of the team, which described extremely interesting microorganisms that combine aerobic and anaerobic environments. These are called cable bacteria. As the scientist from the University of Silesia explains, these bacteria are unique in that, living on the border between the aerobic and anaerobic environments, they create long filaments with which they transmit electrons (in other words, they create electricity-conducting cables, hence their name). They are able to carry out the processes characteristic of aerobic conditions under anaerobic conditions because oxygen is needed to capture (accept) these released electrons.

“Taking into account the characteristics of the heaps, we expect the presence of this type of microorganisms.” Says the researcher from the University of Silesia.

As he adds, they are very important because they are associated with the hope of fighting the greenhouse effect. The anaerobic environment is a source of methane, and the mentioned microorganisms have the ability to decompose it into carbon dioxide.

“I hope that we will be able to identify them and then accurately describe them. We know that they are difficult to breed, and we expect further challenges, but we do not want to give up this important thread accompanying the conducted research. Our expectations for them are high.” Says the scientist.

A better understanding of the impact of conditions in the heaps on microorganisms and microorganisms on the structure of the heaps may be a significant step towards better security of waste resulting from human mining activities. Considering how extremely harmful these places are to people and the environment, the search for the best possible solutions should be further intensified. The presented research is an example of such an action.

The project “The structure and biotechnological potential of the microbiome of burning post-mining heaps” is implemented by: Piotr Siupka, PhD (leader), Ádám Nádudvari, PhD and Ian Marshall, PhD. Analyses under the project are also conducted by: Tomasz Krzykawski, PhD and Hakim Rabia, PhD (Institute of Earth Sciences, University of Silesia), as well as Agnieszka Bylina (Institute of Earth Sciences) and Mateusz Pala, BA (Institute of Biology, Biotechnology and Environmental Protection). Part of the research was conducted in the laboratory of Leszek Marynowski, PhD, DSc.

The article entitled “Burning post-mining heaps” (available in Polish only) was published in the May issue of “Gazeta Uniwersytet UŚ” no. 8 (298). 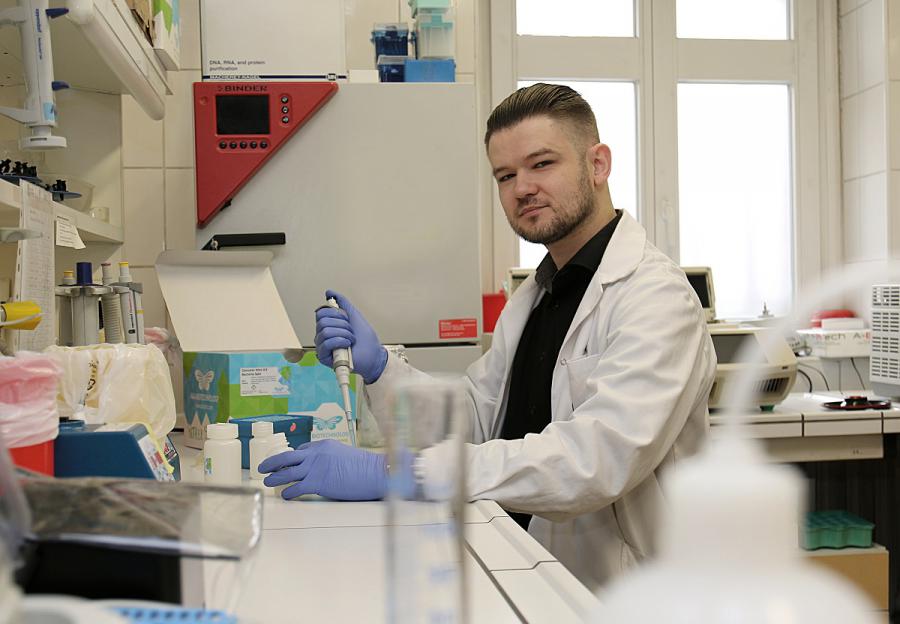