"BACK TO MOBILITY" SERIES

The ‘Staff mobility’ programme for short research internships provided me with the opportunity to spend three months in the Czech Republic – at the Department of Forest Ecology in Brno. My stay allowed me to strengthen cooperation with a research group led by Pavel Šamonil, PhD, who for many years has been analysing natural processes occurring in some of Europe’s best preserved and longest protected forest ecosystems: Razula, Žofin, and Boubin reserves.

I conducted field research in the Boubin reserve, located within Šumava Mountains in the south-western part of the Czech Republic. The work involved geomorphological mapping and then creating a map of surface processes occurring on a forested slope, which has seen very little human interference. Other tasks carried out during the stay included interpreting geophysical data and drafting a scientific article.

My stay in the Czech Republic was not only an experience of a scientific nature, but also a social and cultural one. I had the opportunity to observe closely, in everyday life, how Czech people spend their free time, what interests them and what are their views on a number of issues concerning their country, Europe, and the world. I also had the opportunity to visit the most beautiful caves in the Moravian Karst, including the famous Punkva Cave, part of which is accessible by boat via an underground river.

In 2019, I spent four months in the United States as part of an internship financed by the National Agency for Academic Exchange. The fellowship was awarded under the Bekker programme, and the Institute of Biology at the University of Colorado in Denver was the host unit. My stay there allowed me to develop a close cooperation with Brian Buma, PhD, which has so far resulted in two published scientific articles, one scientific conference, and cooperation within the Opus grant of the National Science Centre.

During my time there, I collected rich research material in the form of tree cores with annual increments from a landslide area of the Colorado Front Range. The main goal of the research is to determine the activity of surface processes such as rockfalls and landslides. Despite being busy with many fieldwork tasks, I also had the opportunity to learn about places of special environmental value: national parks and wildlife sanctuaries. National parks offer an opportunity to experience not only inanimate nature. Yellowstone National Park, where large bison are literally at your fingertips, certainly occupies a special place in this regard. Arches National Park, on the other hand, dazzles with its natural sandstone formations such as spectacular rock arches or petrified dunes. The Dead Horse Point State Park is also a true Utah sensation, where from a 600-metre-high observation platform you can admire the valley of the Colorado River cutting into the sandstone bedrock.

My stay in the United States was also enriched by meeting a variety of people, ranging from Americans whose ancestors emigrated from European countries at the end of the 19th or beginning of the 20th century, through Mexicans, Haitians and Poles who found there a second homeland not so long ago, to interns, also from our country, gaining new experience during shorter or longer scientific internships in Denver and Boulder. 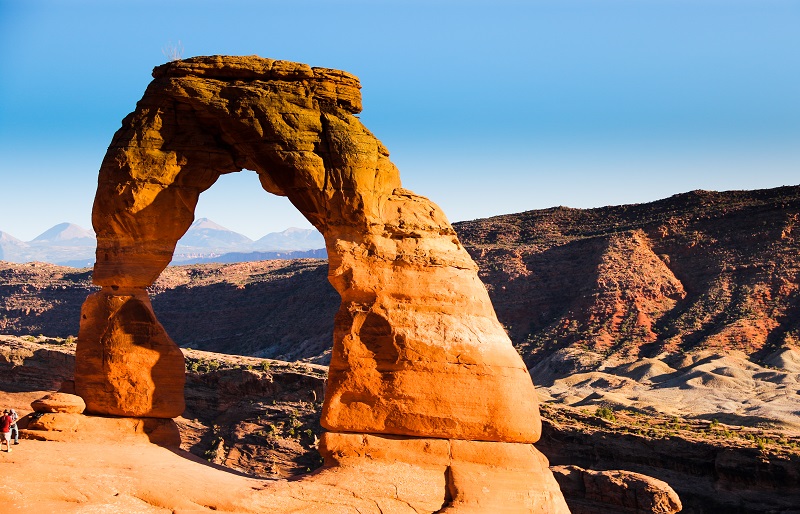 Delicate Arch – one of the rock arches, a symbol of the Arches National Park | photo by Łukasz Pawlik, PhD, DSc