This site uses cookies
By using this website you agree to the use of cookies in accordance with the current browser settings.
Learn more Accept
Go to main content
COVID-19 security status
Level 0: no restrictions, basic health and safety at work rules
Coronavirus Statistics
home link Type articles Past inscribed in stone mounds

Past inscribed in stone mounds 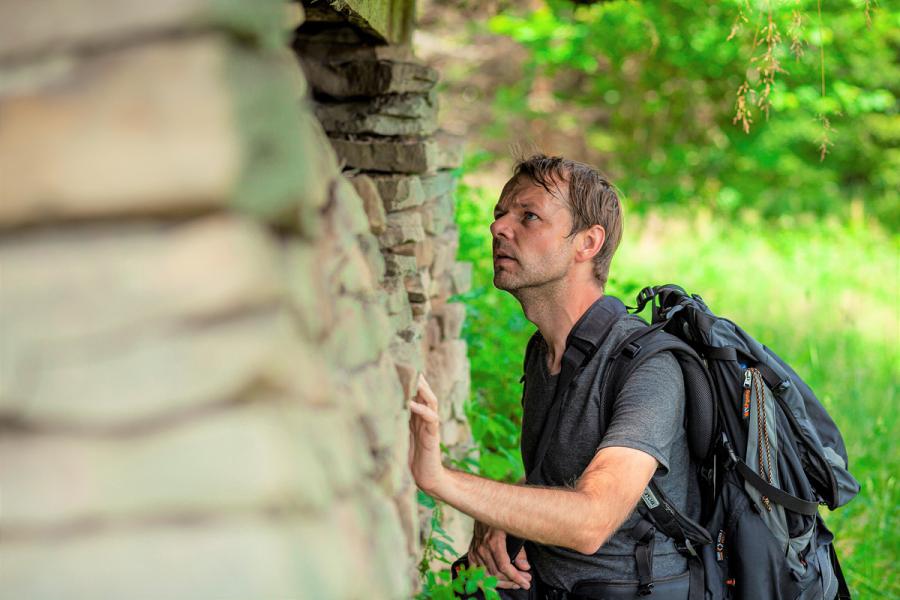 The Beskid Mountains are the youngest mountain range in Poland – they erected around 20 mln years ago. For comparison, the Świętokrzyskie mountains erected much earlier – more than 500 mln years ago. The Carpathians, which include the Beskids, are a permanent research ground for scientists of various specialties. The effects of their work serve not only to broaden the knowledge on the formation processes of individual mountain ranges and allow for an in-depth exploration of the Carpathian mountain range – they also enable the determination of appropriate directions for the protection of these areas in order to preserve its specific landscape.

The Western Carpathians, Silesian Beskids and Żywiec Beskids remain at the centre of research interests of Michał Sobala, PhD, assistant professor at the Faculty of Natural Sciences of the University of Silesia. When collecting materials for his MA thesis in the Silesian Beskid (Structural conditions for the development of the monoclonal ridge Magurka Wiślańska – Magurka Radziechowska), the future geographer did not know yet that the Beskids would become his scientific passion. His doctoral thesis (2015) devoted to the optimalisation of exploatation in the area of the Silesian and Żywiec Beskid was a conscious choice that precisely outlined his further research path. Now, the researcher focuses on assesing the degree of transformation of these areas and landscape changes resulting from human activity. He analyses changes that have occurred in its various elements, such as settlement, land exploration and land cover. He also verifies historical maps.

Difficult conditions, a high degree of forestation and difficult accessibility meant that the first migrants (Wallachians) appeared in the higher parts of the Beskinds only in the 15th century – later than in the surrounding valleys and basins.

“The migrants mostly worked as shepherds, and their interference in the landscape was limited to felling trees for grazing areas. Depending on the number of herds, the presence of animals had a specific impact on the topography. However, the trampled terraces were so impermanent that today they cannot even be traced” emphasises the researcher.

As the population began to grow, the valleys used for farming proved insufficient.

The Beskids started to get crowded, and at the end of the 17th century, “land hunger” appeared – the crops were not enough to feed all the inhabitants who settled around. Thus, the grazing areas were transformed into farming areas, and the inhabitants moved seasonally to higher and higher parts of the Beskids in order to cultivate the land there. Over time, some of them settled permanently in the clearings in the woods. The “land hunger” intensified in the 19th century.

“Forms that can prove this are, among others, agricultural terraces, i.e. places in which, in order to facilitate cultivation, farmers reduced the slope angles and thus, preventing more water runoff as well as erosion which is particularly strong on steep slopes” explains the geographer.

Another evidence of cultivating these areas are stone mounds. Mountain soils are naturally very rocky, and as a result of a natural process, stones appear on the farming areas devoid of vegetation after each winter. Each year the farmers collected them and put them aside in the form of stone mounds placed at the edges of clearings or the boundaries of land. Even today we can find a lot of such stone mounds. Tourists sometimes mistakenly associate them with the remains of buildings.

“Depending on the area in which they are located, they are called differently by the locals. In the south part of Żywiec they are called “krudy”, in the Silesian Beskid – “gromadnice”, while in the vicinity of Jeleśnia they are called “kupiskola”. At first glance they seem useless, but they turn out to be a valuable source of knowledge, a record of the history of the area, as they illustrate various socio-economic processes that took place in the past. Sometimes there were so many stones that they were put aside in long lines, shafts, and even walls – even several hundred meters long” explains the researcher. 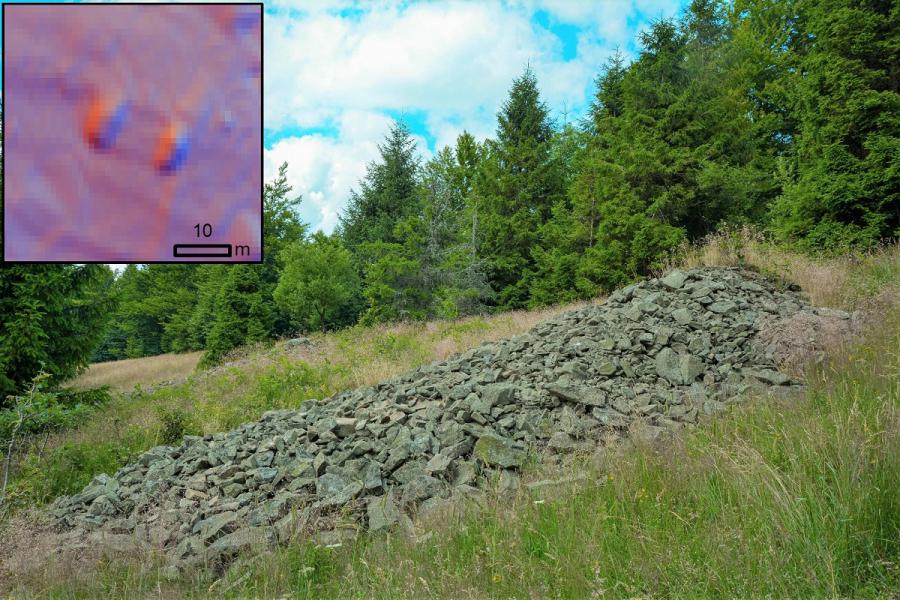 One of the biggest stone mounds (kruda) at the slope of Prusów in the Żywiec Beskids and the picture of mounds visible at the LIDAR data visualisation | Photo: Michał Sobala

The explored areas are mostly deserted, the industry developing at the turn of the 19th and 20th centuries meant that farmers could resign from backbreaking crops in favour of working in steel mills, mines and factories.

The first stage of research by Michał Sobala, PhD, consisted in recreating the way of exploating the glades and halls in the past and the changes that took place during the period from the mid-19th century to the present day. The scientist has gained knowledge about it from archival maps and aerial photos. “Unfortunately” says the researcher “we need to have limited trust in maps, as they are burdened with many errors. An important part of the research is thus verification of the maps’ content, on the basis of other sources, for example documents on the allocation of individual lands, and records kept in archives. Modern technology also came to the rescue, facilitating the inventory of all forms of human activity in the area in question.

New research possibilities were opened by airborne laser scanning, i.e. a photogrammetric measurement method that allows you to record the terrain surface in the form of a cloud of points representing the terrain. The scanner is very accurate, imaging as many as four points on an area of one square meter. Of course, from this cloud, the researchers only choose the points that interest them. Thanks to the different methods of visualisation, they can distinguish the stone moulds (krudy), bays separating neigbouring plots, walls in the forest, roads, slopes of agricultural terraces. However, even such a precise scanner is not perfect, that is why in some points the researcher has to confront what is visible on the lidar with the actual state in the field – that is the second stage of the research.

“Not everything can be applied on the map. Unfortunately, some forms are located in places that are not so easily accessible, such as the bushes or dense woods. Sometimes, however, they might not be accessible, but they are visible – and that is enough. The method of airborne laser scanning and field research complement each other, thanks to which we can get a more complete picture of reality” emphasises the researcher. Without an inventory based on airborne laser scanning data, some of the examined objects and forms would be difficult to recognise in the field. This is due to the fact that large parts of the former clearings are covered with vegetation that covers the existing forms and objects. Until September 2022, Michał Sobala, PhD, have conducted research on 9 places with an area of approx. 600 hectares. One can get the impression that it is not much, however, the decisive factor is not the area, but the degree of compaction of individual forms. On 600 hectares, the researcher inventoried 3,500 anthropogenic landforms and objects. A clearing of several dozen hectares can take up to 2 weeks.

The first stage of his research was conducted in 2020 as part of the project “The role of modern cartographic materials in verifying the content of archival maps for the purposes of landscape change analysis – the example of the Silesian Beskids and Żywiec Beskids” was financed by the National Science Centre. The research areas included: Hala Radziechowska, Polana Jaworzyna and Polana Praszywka. The next stages of his research are financed by the University of Silesia. Michał Sobala, PhD, cooperates with Urszula Myga-Piątek, PhD, DSc, Associate Professor, as part of the Team for Research on Landscape, and Prof. Oimahmad Rahmonov, with whom he published a joint article “The Human Impact on Changes in the Forest Range of the Silesian Beskids (Western Carpathians)” published in the journal “Resources” in 2020. The article sums up the results of the research on contemporary forests. The authors prove that the influence of hisorical forest management on the forest ecosystems in the vicinity of Skrzyczne and Magurka Radziechowska (Silesian Beskids) was much greater than the archival maps indicate.

In July this year, Michał Sobala, PhD, participated in the European Congress of Landscape Ecology IALE 2022, which was attended by 400 scientists from 55 countries around the world. It was a particularly important event, the aim of which was to emphasise the role of landscape ecology as a science that connects the past, present, and future. The congress was accompanied by a competition for the best poster presented during the congress. Michał Sobala, PhD took the first place!

According to the scientist, apart from the scientific activity, popularising science is equally important – that is why the scientist runs his own website (www.michalsobala.pl) where he shares his knowledge on social media. Here, you can also find his awarded poster. Investigating the past, finding traces of the hard work of former inhabitants of the Beskids, and recreating the way they used these difficult areas became the scientist’s passion.

“Old towns have their historic tenement houses, the past of the Beskids is inscribed in clearings and krudy, so we should protect them in the same way as we protect historical buildings, because they are part of our cultural heritage” says the scientist and mountain guide.

The article “Past inscribed in stone mounds” has been published in the October issue of “Gazeta Uniwersytecka UŚ” (University of Silesia Magazine) 1(301).