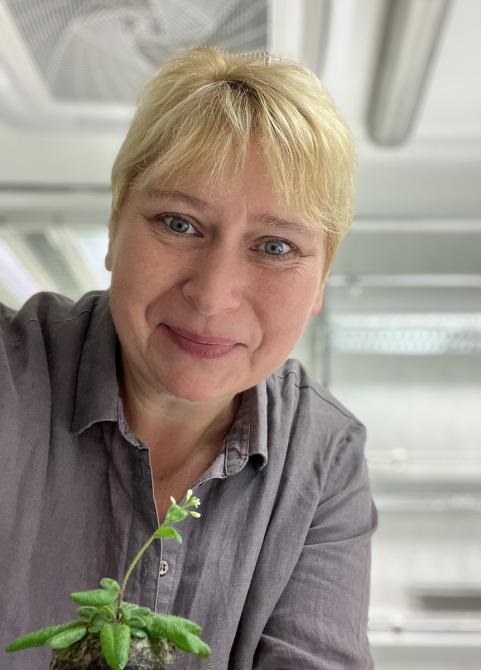 Ewa Mazur, PhD, from the Faculty of Natural Sciences of the University of Silesia in Katowice is a co-author of an article published in the prestigious journal “Nature”. The biologist, together with an international team of scientists, investigated the participation of ABP1-TMK1 proteins in rapid cellular responses related to the process of the so-called phosphorylation, and transport of auxin in the Arabidopsis model plant.

“Arabidopsis is a tiny, annual herbaceous plant that belongs to the cabbage family (Brassicaceae). For me, the similarity between Arabidopsis and cabbage is not unambiguous, but I can see some common features of the model plant and… trees” says Ewa Mazur, PhD.

It turns out that in certain favourable circumstances, it is possible to relatively quickly (in just a few days) obtain in Arabidopsis, a secondary growth around the circumference of the inflorescence shoot. During the formation of this growth, we can observe an actively functioning tissue called cambium. It takes the form of a specific layer of meristematic cells which are responsible for the formation of secondary phloem and secondary wood.

“This is precisely the analogy to the secondary growths observed during the development of trees” explains the researcher.

As indicated earlier, Arabidopsis is a model plant. In practice, this means that scientists have at their disposal a lot of transgenic lines, mutants that they can create themselves in laboratories. Thanks to this, they test the mechanisms describing e.g. vascular tissue differentiation at the cellular and molecular level. One of the plant hormones responsible for this process is the hormone for special tasks – auxin. In order to do this, it must somehow “move” to different parts of the plant. Scientists already know that in order to make this possible, plants form some kind of canalised paths along which the hormone is transported.

“I am particularly interested in how the cellular response occurs, how the canalised pathways are formed, and how the vascular tissue is rebuilt in the event of various injuries, for example, incision of a part of the plant” says the co-author of the article.

Ewa Mazur, PhD, has been researching this process for many years, together with the team of prof. Jiří Friml.

“I receive Arabidopsis transgenic lines from an Austrian laboratory for further analysis. Then, together with other scientists, I describe the responses of plant cells to the processes we are interested in” adds the biologist. 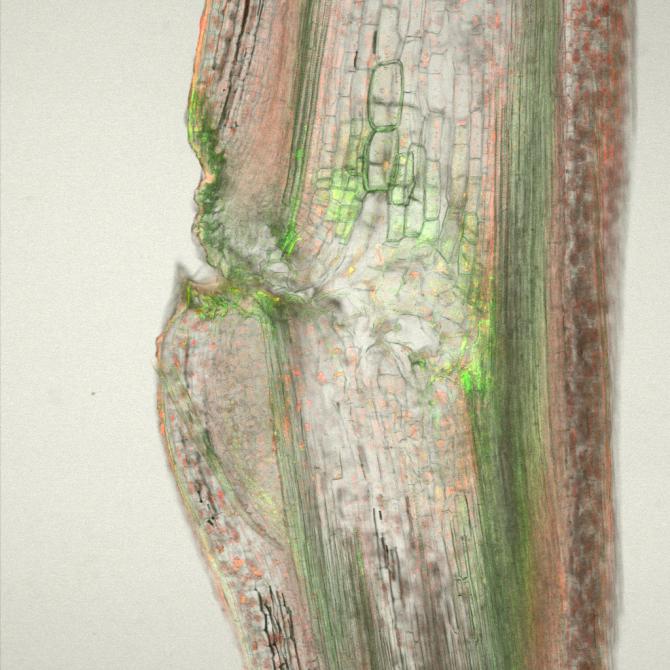 “Certain mechanisms observed, for example, in trees or other plants, were already known before. The ABP1 protein, which binds auxin, described in the publication, was the subject of many studies. We suspected that it was associated with the rapid responses of plant cells to auxin, but it was very difficult to explicitly state” says Ewa Mazur, PhD. “Our research has shown that for the ABP1 protein to be an effective auxin binding molecule, a transmembrane kinase is needed that enables rapid protein phosphorylation. This brings us to the most important part of our discovery” she adds.

The process of phosphorylation consists in the transfer of phosphate groups to proteins by enzymes called kinases. Thanks to this, proteins can not only undergo various modifications and change their properties within the cell, but also change their location. In the case of vascular tissue regeneration, the rapid relocalisation of auxin transport proteins within the plant cell and the directed flow of auxin through the appropriate group of cells forming specific channels and eventually differentiate into vascular tissue, are essential.

“Auxin, the transport of which we are talking about, is a very interesting substance. It is one of the first plant hormones discovered by scientists. It has a wide spectrum of activity. It affects the embryonic development of the body, takes part in the formation of various organs, e.g. leaves or roots. It is also important for the differentiation of cells, i.e. their division and the formation of specific tissues, including the aforementioned cambium” explains the researcher.

She also adds that an unusual feature of auxin is the fact that it moves polarly. This means that it can be transported from cell to cell in a specific direction. In order for this to happen, they must react appropriately to the presence of the phytohormone.

Auxin can therefore be compared to the “brain” of a plant.

“From the moment the embryo is formed, it is this hormone that decides how the embryo is to be shaped. The presence of auxin also seems to be crucial at further stages of development, when organs such as leaves, roots, and side shoots are formed. Any defects related to the transport of phytohormone can cause developmental disorders” says Ewa Mazur, PhD.

One of the experiments conducted by the biologist is the transverse incision of flowering shoots of plants. This action disturbs the polar transport of auxin, i.e. blocks its flow. This, in turn, allows the scientists to observe, first, what happens to the hormone, how it reacts to such a typical obstacle. Secondly, the reaction of the cells around this damage is observed. 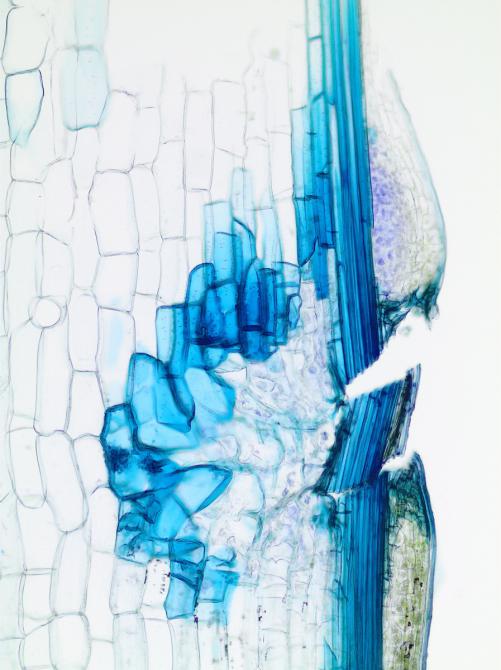 Studies have shown that auxin in this case begins to accumulate directly above the incision. This may take up to several days. Then, it finds alternative sources of flow, as the cells around the incision become involved in its transport. “The most interesting thing is that only single cells respond to the presence of auxin and they create channels to transport the phytohormone further, and thus, bypass the damage and enable differentiation into vascular tissue. This is how the tissue is regenerated” explains the scientist.

This is one evidence of remarkable, well-coordinated intercellular communication. Hence the comparison of auxin to the “brain” that controls the development of a plant by deciding on the activity of individual cells at various stages. It is worth noting that these responses occur at different times, sometimes very quickly, sometimes slowly. This, in turn, depends on the presence of the phytohormone in certain plant tissues or organs.

Scientists working in the team of Prof. Jirí Friml wondered what causes the rapid cellular response in the process of regeneration and polar transport of the studied phytohormone. They have long suspected that the aforementioned ABP1 protein plays a big role. However, these were hard to prove intuitions. Then they came up with the idea that perhaps it doesn’t work alone, but requires the presence of a partner located on the cell membrane. There was an idea of transmembrane kinase in the form of the TMK1 protein, which turned out to be a hit. Their research confirmed that the tandem of ABP1-TMK1 proteins is in fact responsible for the rapid reaction of cells in both processes mentioned above, and groundbreaking results were published in “Nature”.

“We are currently wondering how an initially homogeneous tissue some cells are able to respond to auxin and begin to determine to change differentiation, while other cells remain indifferent to the presence of this hormone. We are still trying to explore this topic. Not everything has been discovered yet. We are therefore starting another joint scientific project, aimed at combining the results of previous research with the question that bothers us. There are many experiments waiting for us” she sums up.

The article “ABP1–TMK auxin perception for global phosphorylation and auxin canalization” co-authored by Ewa Mazur, PhD, was published in the magazine “Nature” in September 2022.

The article “Plants “brain”” was published in the November issue of “Gazeta Uniwersytecka UŚ” (USil Magazine) 2(302).