This site uses cookies
By using this website you agree to the use of cookies in accordance with the current browser settings.
Learn more Accept
Go to main content
COVID-19 security status
Level 0: no restrictions, basic health and safety at work rules
Coronavirus Statistics
home link Type articles The Secret of Sucha Góra | Research of Prof. Marzena Lamparska

The Secret of Sucha Góra | Research of Prof. Marzena Lamparska

Silesian Greenwich, place of origin, geodetic heart of Silesia – these are some of the names given to one of the oldest elements of the triangulation network in the territory of Poland. There is a good reason for this. The inconspicuous stone with an engraved triangle and letters “TP” in Sucha Góra (a district of Bytom) is of great importance for the European cultural heritage. Marzena Lamparska, PhD DSc, a geographer from the Faculty of Natural Sciences of the University of Silesia in Katowice, tells us about this valuable first-order point of the Prussian geodetic control network in the Upper Silesian Coal Basin.

Nowadays, to measure a distance or determine the precise location of a human being or object somewhere in the field, we use satellite navigation system signals, whose range covers the whole Earth. Based on this, we can get to any place in the world, as well as delimit a building and update maps. However, people used to demarcate routes and calculate distances before dozens of satellites were placed into our planet’s orbit. How did they do it? They used the so-called triangulation method, which allowed them to perform very precise measurements for military, economic, administrative and planning purposes. It was thanks to this method that astronomical coordinates were set for specific points located on Earth. These places were not chosen by accident. The most important of them, from the perspective of geodetic calculations, were referred to as first-order points, which formed a geodetic network. For decades, such network was used not only to measure the Earth, but also to study its shape, develop maps and draw state boundaries.

When discussing the history of geodesy, Prof. Marzena Lamparska emphasizes the fact that at the beginning of the application of the triangulation method, the points were not very clearly marked. For example, incisions were made on selected trees. With time, it was realised that such points must be much better marked in order to be useful for many years. It was then that people began to build astronomical observatories near the most important points, such as Greenwich and Potsdam. In certain other locations, we can still see stone cubes and cuboids, slightly protruding over the ground surface, which have survived to date.  Additionally, special tall wooden (alter granite) signal towers were built around them. One of such stones still stands in Sucha Góra in Silesia, although the tower is not there anymore.

“Let us not be misled by the inconspicuous appearance of this object. The protruding granite part with only 25 cm of height and marked with letters “TP ” and a triangle is just the tip of the iceberg, as the saying goes. The constructors made sure that such stones demarcating the triangulation points could be neither removed, nor moved, even by one centimetre. This is because the accuracy of measurements performed on this basis depends on their location,” says Prof. Marzena Lamparska.

“This point is marked with a granite pillar sunk deep into the ground and additionally secured with stabilisers. It really cannot be taken away,” emphasizes the researcher once more.

The so-called “light tower”, commonly referred to as “signal candle”, was built above every stone. As explained by the geographer from the University of Silesia, measurements were very frequently carried out at night. The stone itself would not be visible at a large distance, which is why the towers together with light signals played a key role in the identification of subsequent points.

It is worth adding that the objects were different in height, depending on the importance of the point that they marked. They were usually solid wooden structures erected of up to dozen metres or so. For many years, such a tower marked the point in Sucha Góra. It was probably demolished in the 1970s. To understand the importance of the point located in Sucha Góra and its significance for the European cultural heritage, let us go back to the history of geodesy.

To measure the Earth

The idea of measuring the Earth based on the triangulation method can be traced back to the end of the 18th century, and its boom came in the 19th century. The international project of measuring the meridian arc and Earth’s curvature was implemented in Europe at that time, in line with the concept of Prussian geodesist and cartographer Johann Jacob Baeyer. The work, which required close cooperation of as many as sixteen countries, were begun in 1861. It involved designation of triangulation points, which formed a unique network.

“Such a network of points was to facilitate the implementation of many smaller and bigger challenges undertaken by humans. The calculations based on designated points were used to delimit railroads, build bridges and cities, define the territorial boundaries of industrial plants, determine parcels and prepare land and mortgage registers,” explains the geographer from the University of Silesia.

“Thanks to this method, the Earth was measured and its shape was studied,” she adds.

We should not be surprised with the intensification of work in that particular period of history. The 19th century saw a strong development of industry and formation of national states, whose territorial scope had to be determined, as well as the size of forests, fields and roads for economic and military purposes. The development of technological civilisation and military operations required precise maps, which in turn contributed to intense development of geodesy. It also required international cooperation, despite the military conflicts.

“Not for the first time in history, but there were also cases of using scientific achievements and discoveries for purposes that we would refer to nowadays as unethical. Such measurements were used, among others, to delimit the borders of colonial territories in the age of great empires, and to divide the annexed lands. This is also something we shouldn’t forget about,” says Prof. Marzena Lamparska.

In the 19th century, Prussians, Austrians and Russians had a lot of area to measure, and each of them did that within their borders, using similar methods. Thanks to that, the measurements could be connected, and it actually happened in 1848-1851. The so-called connection point on the Prussian side was Sucha Góra, which was referred to as Trockenberg on the Prussian maps and Tarnowitz on the Russian maps. In the preserved descriptions of connecting points, it is listed as a first-order point of the Prussian triangulation network delimited in 1824.

The points of this order were not only used for most important geodetic calculations, but also gave rise to local mining, economic and industrial geodetic networks. The same was true for Sucha Góra. It was the beginning of a new coordinate system, referred to as “suchogórski”, which was used when creating e.g. precise maps for the Upper Silesian region, although it is worth remembering that at the time when the measurements were carried out, this area was under the Prussian rule. From the 19th century until 2000, this system covered all Silesian mines.

“This is an outstanding historical monument of great importance for the history of geodesy, and a valuable treasure of the European cultural heritage. Together with a large group of enthusiasts associated in the Polish Society of Amateur Astronomers in Chorzów, of which I am a member, we want to protect and expose it,” says the scientist.

“One of our ideas is to reconstruct the wooden light tower, so that Sucha Góra becomes an interesting tourist attraction. We will continue our efforts. Perhaps we will manage to obtain funds under the participatory budget in Bytom. We would also like to include the triangulation point on the UNESCO’s global heritage list,” she adds.

The history and research on this special first-order triangulation point were presented by Prof. Marzena Lamparska in cooperation with Mirosław Danch from the Polish Society of Amateur Astronomers in the article entitled Sucha Góra (Trockenberg) – The Triangulation Point Doomed to Be Forgotten? The material was published in open access formula in the scientific journal Land.

“I really appreciate my cooperation with the Society. It is formed by scientists and amateurs – enthusiasts interested in such places. They are great science communicators. Their activity helps share knowledge with others, expand it and set the direction for new research. They often contribute to rescuing cultural and industrial heritage. This is why I am happy to be one of them, and to develop my scientific interests also outside the university, which does not have a monopoly on creating knowledge, does it?,” asks rhetorically the co-author of research on Silesian Greenwich.

The article entitled The Secret of Sucha Góra was published in the March issue of „Gazeta Uniwersytecka” no. 6 (286). 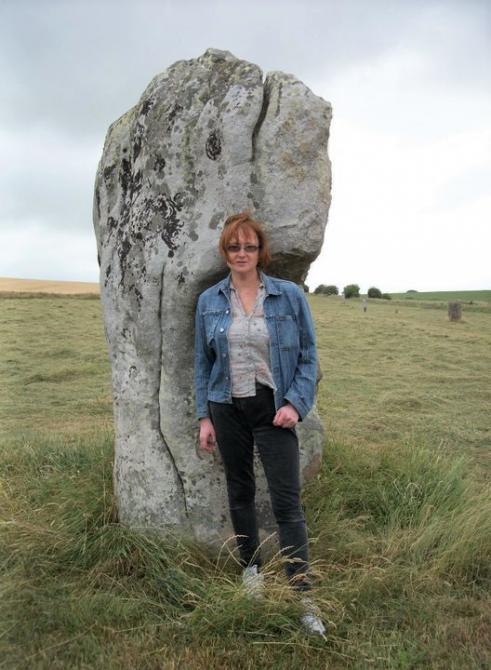 Marzena Lamparska, PhD, DSc, Associate Professor from the Faculty of Natural Sciences of the University of Silesia in Katowice | photo from the archive of Prof. M. Lamparska