This site uses cookies
By using this website you agree to the use of cookies in accordance with the current browser settings.
Learn more Accept
Go to main content
COVID-19 security status
Level 0: no restrictions, basic health and safety at work rules
Coronavirus Statistics
home link Type articles Generalisation of equipartition theorem for quantum systems

In the development of science, especially physics, there were breakthrough moments which radically changed our perspective and understanding of nature. Such were the times of developing Newton’s theory of classical particles, Maxwell’s theory of electromagnetism and electromagnetic waves, Einstein’s theory of relativity, and finally the times of formulating quantum mechanics, which describes the microworld at the level of atoms, electrons, protons and other constituents of matter. The latter theory is over 100 years old, and inspires respect and a sense of mystery to date, especially among non-physicists. It is thanks to quantum mechanics that we have transistors, which some regard as the greatest invention of all times. Were it not for transistors, there would probably not be computers, Internet or mobile phones at the moment. Just to think how many jobs the founders of quantum mechanics created by chance.

Let us go back to the origin of the theory of microworld. In fact, the world of atoms has always existed, but it wasn’t until the 19th century kinetic theory of gases and later Maxwell-Boltzmann statistical theory that a serious debate about the world of atoms began. Towards the end of the 19th century, a majority of physicists thought that everything was already known and that this field of science was coming to an end. However, physics is an experimental science, and it is the experiment that verifies its predictions. Who would have thought that a slightly weird and unlikely physical system, that is a perfect black body, will turn the existing theories in physics upside down. Such a perfect black body does not exist in reality, but its approximation is a box with a small hole, painted inside with a good black paint or filled with soot. If we heat it up, it radiates electromagnetic waves, and in thermodynamic equilibrium conditions, the spectrum of these waves is universal in nature, depending only on the system temperature. According to the universal equipartition theorem, in thermodynamic equilibrium conditions kinetic energy is distributed evenly to all system degrees of freedom. In particular, each degree of freedom of such a wave has the average energy of E=kT/2, where k is the Boltzmann constant, whereas T is the absolute system temperature (the unit of temperature is kelvin). Boltzmann constant allows to convert temperature to energy and back. Physicists wanted to explain the results of experiments, but on the grounds of the existing theories, they reached absurd conclusions that the energy emitted by a perfect black body is infinitely huge (the so-called ‘ultraviolet disaster’). It had to be repaired somehow.

On 14 December 1900 Max Planck presented a mathematical formula, which matched well the data from experiments. Planck assumed that average energy E depends not only on temperature, but also on the frequency of electromagnetic wave, and this assumption clearly opposed the above-mentioned equipartition theorem. Moreover, this formula contained a new constant (nowadays referred to as Planck constant), which cannot be obtained in any way on the grounds of the classic theories which existed back then. It should be realised that the introduction of a new constant to theory is a revolution resulting in the establishment of new physics.  This new physics is quantum mechanics. Therefore, the negation of existing and established thinking patterns became a source of new perspective on the reality that surrounds us, to date full of mysteries and inconceivable implications in the form of entangled states, teleportation and encryption.

The above deliberations make us aware that two seemingly unimportant elements in the science existing back then will contribute to the formation of quantum mechanics. These two elements are abstractly perfect black body and universal equipartition theorem. Why is this principle universal? Because it applies to every system in the state of thermodynamic equilibrium. Such a system can be built of any number of particles, which may interact in any way with one another or with the environment.

All of this is valid for the systems described with the classic theories. John James Waterston, a forgotten pioneer of the kinetic theory of gases, formulated this law for the translational movements of particles as early as 1845. Then James Clerk Maxwell and Ludwig Boltzmann, fathers of statistical physics, generalised this law for any degrees of freedom. It was Boltzmann who demonstrated in 1876 that the average kinetic energy of particles amounts to kT/2 in every direction of motion.

And what is the case of quantum?

After over 100 years of history of quantum mechanics, there was no answer to this question. It was known, however, that this law does not apply in the quantum world in the same form as in classic systems. The first paper by Prof. Jerzy Łuczka and his doctoral student Paweł Białas, which suggested a form of equivalent of this law, was published in 2018. However, this work concerned a very specific quantum system: it was a quantum free particle in contact with thermostat. The following 4 papers also concerned specific quantum systems and it could not be considered as generalisation of the classic theory.

It wasn’t until 2020, i.e. 120 years after Planck’s work, that the publication was released which provided a universal formula for the average kinetic energy of any system of quantum particles in the state of thermodynamic equilibrium: see J. Łuczka, Quantum counterpart of classical equipartition of energy, J. Stat. Phys. 179, 839 (2020). Not only is it a generalisation of the classic law on equipartition of energy, but also generalisation of what Max Planck proposed for quantum oscillators in the generalisation.

According to the classic formula E=kT/2, the kinetic energy of a particle goes to zero, when temperature T goes to zero. The particle simply does not move. The kinetic energy of quantum particle is different from zero even at zero temperature. There are two reasons for this: Heisenberg’s uncertainty principle and quantum vacuum fluctuations. It is impossible to be motionless in the microworld, constant motion is absolutely necessary.

And so, after 2,500 years we have come full circle and returned to Heraclitus of Ephesus: πάντα ῥεῖ. 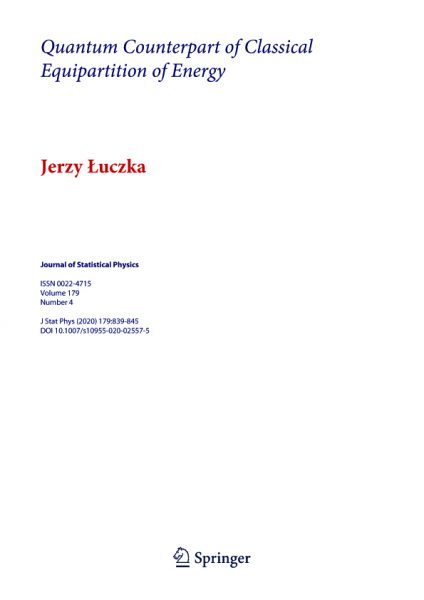 In 2020, i.e. 120 years after Planck’s work, the publication by Prof. Jerzy Łuczka entitled Quantum counterpart of classical equipartition of energy, J. Stat. Phys. 179, 839 (2020) was released. It provided a universal formula for the average kinetic energy of any system of quantum particles in the state of thermodynamic equilibrium. Not only is the work a generalisation of the classic law on equipartition of energy, but also generalisation of what Max Planck proposed for quantum oscillators in the generalisation.

Prof. Jerzy Łuczka – theoretical physicist from the Faculty of Science and Technology at the University of Silesia in Katowice. He is a member of the Polish Academy of Arts and Sciences and Council of the National Science Centre, as well as an editor at Scientific Reports (Nature).