This site uses cookies
By using this website you agree to the use of cookies in accordance with the current browser settings.
Learn more Accept
Go to main content
COVID-19 security status
Level 0: no restrictions, basic health and safety at work rules
Coronavirus Statistics
home link Type relations Interuniversity Inauguration of the Academic Year 2022/2023 is behind us!

Interuniversity Inauguration of the Academic Year 2022/2023 is behind us!

Seven universities which are part of the Academic Consortium Katowice “City of Science” jointly inaugurated the new academic year 2022/2023. Friday, 30 September 2022, will be remembered in the history of Katowice, as for the first time seven universities based in the capital of the Silesian Voivodeship celebrated their joint inauguration.

The Academic Consortium Katowice “City of Science” was established in order to prepare and conduct the “year-round science games” in 2024 – during this time Katowice will enjoy the title of the European City of Science. Another goal is to continue building the City of Science together also after that date. The following entities joined forces in the Consortium:

The inaugural ceremonies were held at the headquarters of the Polish National Radio Symphony Orchestra, and were preceded by the rector’s procession: the authorities and senates of the universities included in the Consortium set off from the Silesian Theatre, walked along Aleja Korfantego in the direction of “Spodek”, along the rondo gen. Ziętka [Gen. Ziętka roundabout], Aleja Roździeńskiego and ul. Olimpijska and entered the seat of the Polish National Radio Symphony Orchestra from plac Wojciecha Kilara [Wojciech Kilar Square]. The KWK Wujek [The Wujek Coal Mine] Brass Band also took part in the march.

The state administration was represented by: the Silesian Voivode, Jarosław Wieczorek, who read the congratulatory letter from Prime Minister Mateusz Morawiecki, and Wojciech Murdzek – secretary of state in the Ministry of Science and Higher Education, plenipotentiary of the state for the reform of the functioning of research institutes. The event’s partner was Metropolis GZM, represented by Kazimierz Karolczak – chair of the board of GZM.

“Today’s inauguration is a truly historic moment. Over the past 30 years, we have acted step by step for the development of the city, region and metropolis on various levels. And today, we present another jewel in the crown, the Silesian universities”, said the Mayor of Katowice, Marcin Krupa, PhD. “I am extremely proud that within the administrative boundaries of our city accumulates such extensive intellectual and scientific capital, covering so many areas of knowledge and artistic activity. This was noticed by the EuroScience organisation, which awarded Katowice the title of the European City of Science.”

The ground-breaking character of the ceremony and what it heralds was emphasised by Prof. Ryszard Koziołek: “Before our eyes, the unthinkable is happening: seven universities have passed through the streets of Katowice and together they begin the next academic year. We said:  ‘Here we are, here among you, we try to be useful in all possible manifestations that a man guided by reason and knowledge can make’. We want the inhabitants of our region to become aware of this. Seven universities were linked by the idea of ​​the City of Science, which quickly became reality, because our universities are the City of Science. It was enough to change the perspective and remember that large, strong and ambitious academic centres have been created in this region for a hundred years. The rectors only had to draw lines of connection between them and build bridges of cooperation. We want to expand such a City of Science. Our efforts in applying for the title of the European City of Science 2024 were successful, as the City of Science was immediately noticed by the authorities of Katowice and Prof. Michael Matlosz. Our task now is to make the region’s inhabitants see them, including those not necessarily related to our universities. We want them to know that they live a life among scholars and students and that this life becomes better, like any life with everyday friends who support them with help and advice.” 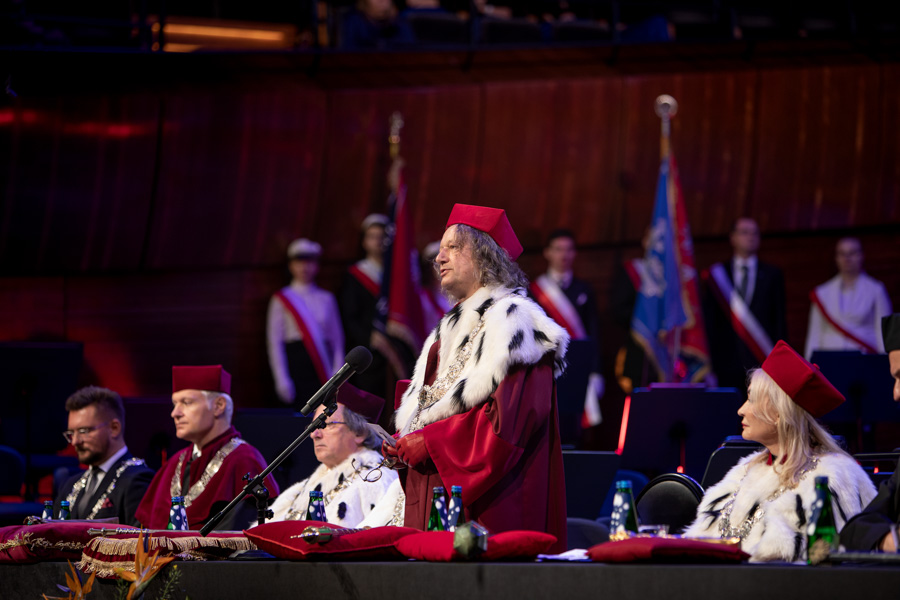 The traditional inaugural lecture was delivered by Prof. Michael Matlosz – chair of EuroScience, the association for the development of science and technology, which awards the title of the European City of Science. Prof. Matlosz pointed out that at the beginning of the academic year we usually look to the future with great hopes, but today that future seems more uncertain than ever before. Russian aggression in Ukraine, energy, food and climate crises, the various consequences of the coronavirus pandemic – all this makes us feel terrified and overwhelmed.

“We, however, cannot be scared! In the face of the serious challenges of our times, we must – just like mankind has done in the past – use our collective intelligence and fearlessly move towards the common future”, argued Prof. Michael Matlosz. “However, this creates an urgent need to change the perception of science so that society does not consider it isolated. Universities must be integrated with the cities, metropolitan areas and regions in which they are located and work together for the development of the entire community.”

The chair of EuroScience also emphasised that the challenges facing Katowice and Upper Silesia, related to the transition from an industrial economy based on coal mining to a knowledge-based economy, were a decisive factor in awarding our city the title of the European City of Science 2024.

Rector of the Academy of Fine Arts, Prof. Grzegorz Hańderek presented the official logo of the European City of Science 2024. “Seven elements, referring to the seven universities making up the Consortium and the relations between them, create a new form. It can be associated with an industrial form – such connotation is absolutely justified because when talking about our common intentions, we refer to science as the new industry of Silesia. The seven elements that stand for integration and cooperation here form a star in the centre – a symbol of aspiration and success. In a different configuration, we combined the logo with the logo of the city of Katowice”, explained the Rector of the Academy of Fine Arts.

The need for an independent and united science was emphasised by the Rector of the University of Economics, Prof. Celina Olszak: “Science and academia know no boundaries because they are based on curiosity, discovering new knowledge, and making changes. Science is like a living constellation that, depending on the existing situation and conditions, sets new challenges for us and indicates ways of thinking. Science, especially today, needs autonomy and independence, but it also needs unity. For unity offers a chance for greater security, and also lifts us to higher levels of possibilities and responsibility.” 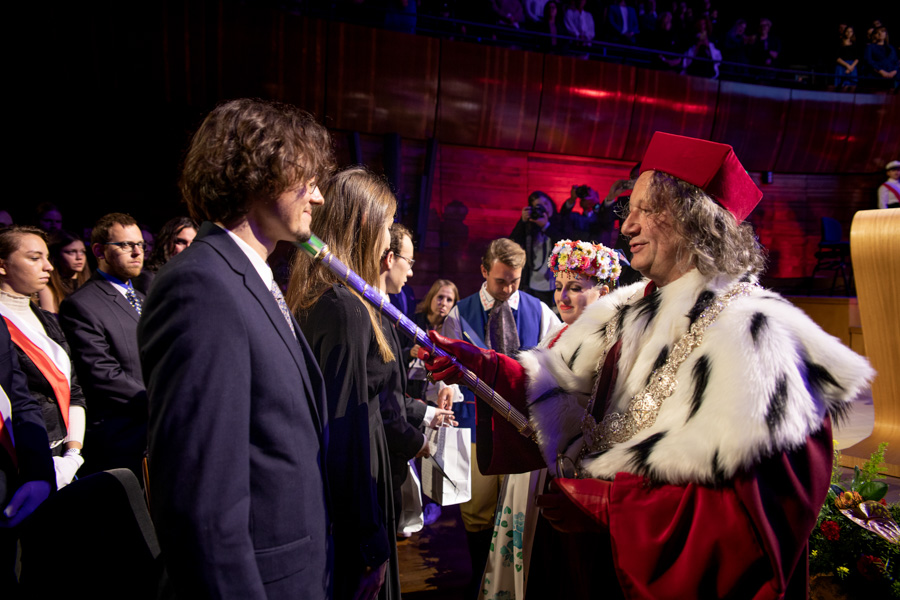 “The university is a synonym of equality. We all create it as a group and individually. Today, the place where I greet my colleagues starting their adventure with university education is one large and very diverse community of scholars and learners. Scientific community – that’s the key word. Never forget about it, because it is science that will give us the future”, said Tomasz Janocha.

At the end of the ceremony, the Rector Prof. Grzegorz Hańderek invited the participants of the event to the opening of the traditional inaugural exhibition of the Academy of Fine Arts. The exhibition Sygnał dobra [Signal of Good], referring to the group examining the impact of a smile on a person’s life from Małgorzata Musierowicz’s book Kwiat kalafiora [Cauliflower Flower], will be on view at Rondo Sztuki [Roundabout of Art] in Katowice until 30th November. Additionally, the Rector Prof. Władysław Szymański announced the concert crowning the ceremony, the programme of which consisted of works by one of the graduates of the Karol Szymanowski Academy of Music – Wojciech Kilar: the second piano concerto (written to commemorate the victims of the Smolensk catastrophe) and the symphonic poem Krzesany performed by the Polish National Radio Symphony Orchestra and soloist Krzysztof Książka on the piano under the baton of by Antoni Wit.

The photo report is available at: us.edu.pl/multimedia/miedzyuczelniana-inauguracja-roku-akademickiego-w-miescie-nauki-katowice. 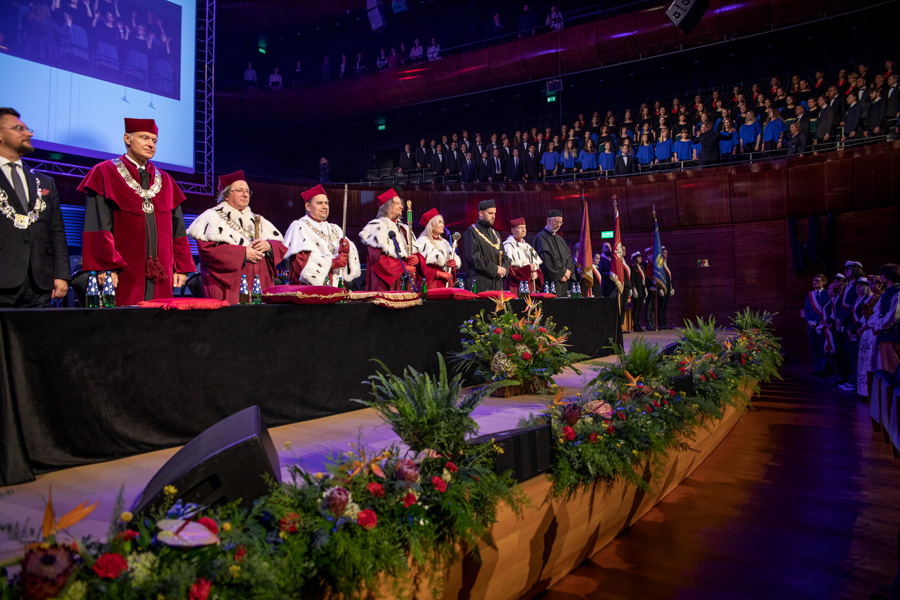