This site uses cookies
By using this website you agree to the use of cookies in accordance with the current browser settings.
Learn more Accept
Go to main content
COVID-19 security status
Level 0: no restrictions, basic health and safety at work rules
Coronavirus Statistics
home link Type articles Cancer found in a bone of a prehistoric amphibian over 210 million years old 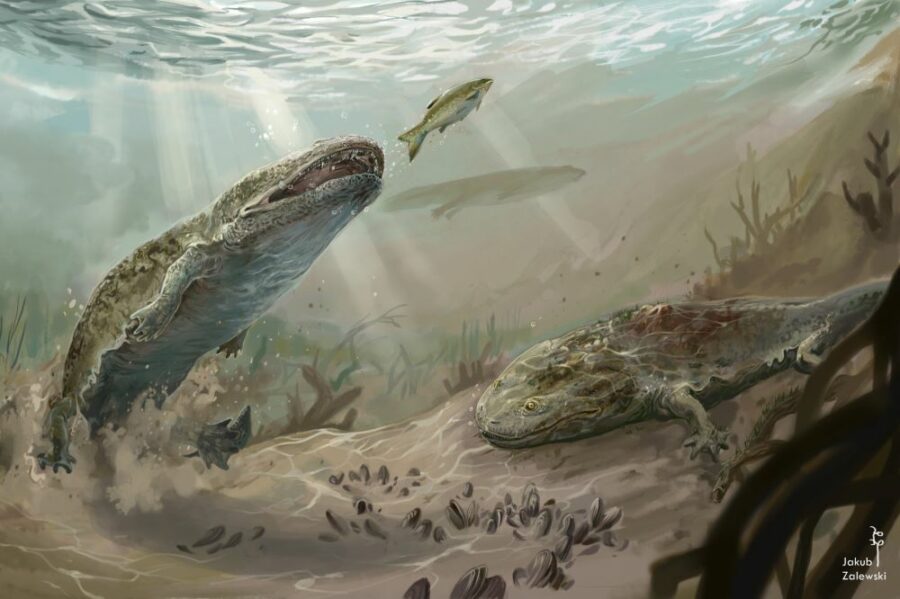 Metoposaurus, representatives of Labyrinthodontia (Greek, ‘maze-toothed’) in their habitat, about 210 million years ago. The individual on the right has a distinct overgrowth in the anterior thoracic spine. It has limited mobility along with the ability to hunt and seems malnourished. Author of the picture: Jakub Zalewski. Source: „An insight into cancer…”. Licence: CC BY 4.0

USil scientist, along with his team, made a discovery that sheds new light on the origin of tumours

Traces of diseases occasionally found on the bones of prehistoric animals give insight into an array of health problems the ancient inhabitants of Earth faced. At the same time, such traces provide evidence of an ancient descent of some diseases, sometimes lasting for hundreds of millions of years.

Cancers have a way longer history than one might think.

Paleontological evidence is limited to fossilised skeletal tissues; therefore, diseases that can be identified in the fossil material must either involve the skeletal system directly or affect it indirectly if they originated in some other parts of the body. Such diseases include some malignant tumours, which are commonly considered to be linked to the development of human civilization, and the exposure to progressive environmental pollution caused by it.

These factors undoubtedly increase the incidence of malignant tumours in modern times. However, cancer itself has a history much older than civilization and even humanity as a whole. Studies of cancer in non-human animals, including those in evolutionarily ancient groups such as coelenterates, show that the process of cancer formation (carcinogenesis) is an evolutionary plesiomorphic (ancestral) feature, almost as old as the animal life on Earth itself.

Cancer formation underlies the evolution and development of clonal multicellularity. Multicellular animals exhibit a natural propensity to constantly divide and differentiate the cells of their bodies. The course of the clonal cell divisions (i.e. those in which daughter cells are formed from a single primary cell) is strictly controlled and regulated by the genetic mechanisms managing the animal’s body. Sometimes, due to certain unfavourable mutations, this control is deregulated, resulting in an uncoordinated cell division causing excessive growth of tissue beyond the upper limit of tissue content necessary to maintain the shape and size of an organ. This is how—according to the widely accepted somatic mutation theory—tumours are formed.

The knowledge of the evolutionary history of neoplasms, and therefore when and in what animals did they occur and how did they affect their lives and function, can help in understanding their evolutionary prospects, which indirectly can also contribute to the development of new therapeutic methods.

Fossil evidence of cancer in the form of bone deformities expressed as growths or tumours has also been previously identified in dinosaurs and other prehistoric vertebrates. 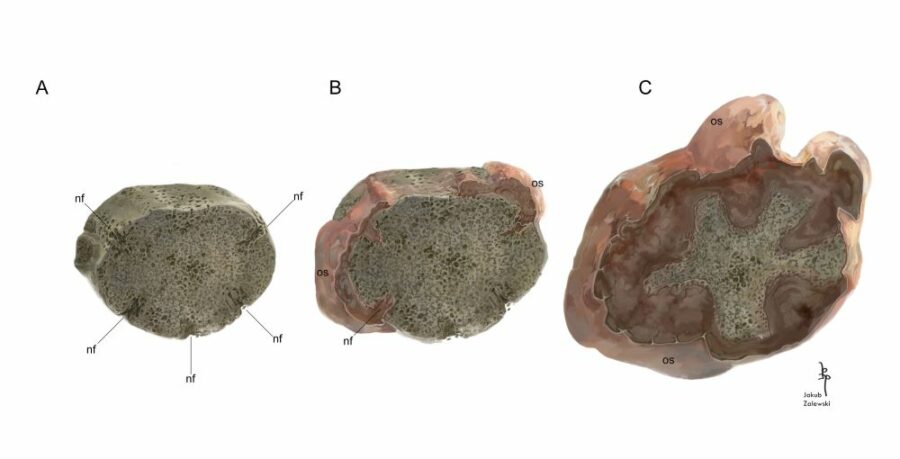 Reconstruction of the growth and stage of the invasion of malignancy. A) Original, unaffected vertebra containing five nutrient channels (nf). B) Growing tumour tissue – depositing ossein (os) outside the vertebra, growing mass of the tumour. C) A rapidly growing tumour gradually reduces the space available for the proper tissue. Eventually, a tumour grows through the nutrient channels into the inside of the vertebra Author of the picture: Jakub Zalewski. Source: „An insight into cancer…”. Licence: CC BY 4.0

An interdisciplinary, international research team led by Dawid Surmik, PhD from the Faculty of Natural Sciences of the University of Silesia in Katowice has provided another significant evidence of the occurrence of cancers in the distant past of the Earth.

In a paper published in BMC Ecology and Evolution (in the special collection Evolutionary Biology and Ecology of Cancer), the scientists presented the results of their study of a Triassic vertebra of an extinct temnospondyl amphibian, Metoposaurus krasiejowensis, discovered in Krasiejów near Opole, southwestern Poland. Krasiejów is a site well known to palaeontologists, yielding numerous remains of fossil vertebrates, which have been studied over the years by scientists from various Polish and foreign institutions.

On one of the vertebrae of a Late Triassic metoposaurid amphibian belonging to the scientific collection of the Institute of Palaeobiology of the Polish Academy of Sciences, an overgrowth of bony mass was identified that covered its significant portion. The researchers, in cooperation with the Faculty Laboratory of Computer Microtomography of the University of Silesia, used X-rays to learn about the internal structure of this fossil. The scans revealed that the pathological tissue not only grew around it from the outside but also invaded its insides, penetrating deep into the bone through natural nutrient canals present in the vertebra. At that moment, it became clear that the cause of the growth was a malignant tumour.

Further analysis of the scans revealed that much of the original structure of the vertebra has been destroyed by the growth of the cancerous pathological tissue. Researchers cut the specimen and glued bone fragments to a microscope slide, grinding its surface to obtain a thin, translucent sample that can be observed in a transmitted light microscope, similar to the way modern cancer samples are examined in medical laboratories. The sample prepared in this way revealed a lot of information regarding the histological structure of the pathological tissue, especially the contact between the cancerous part and the healthy tissue, not yet affected by the neoplastic process.

Based on these observations, the team of scientists concluded that the cancer that affected the fossil amphibian was osteosarcoma. Additionally, detailed research revealed much more about the growth dynamics of the prehistoric cancer, the reconstruction of which is presented in detail in the article.

A malignant tumour in Metoposaurus identified by the Polish-German-American team of scientists is currently one of the oldest examples of cancer in the fossil record and the only one related to a fossil amphibian. It is also the best-documented evidence of cancer in a prehistoric animal, supported by solid results from microstructural studies.

The paper by the team led by Dawid Surmik, PhD, entitled An insight into cancer palaeobiology: does the Mesozoic neoplasm support tissue organization field theory of tumorigenesis? was published in BMC Ecology and Evolution.

The team consisted of: Piotr Duda, PhD Eng. from the USil Faculty of Science and Technology; Justyna Słowiak-Morkowina PhD; Tomasz Szczygielski, PhD and Dawid Dróżdż, MSc from the Institute of Paleobiology of the Polish Academy of Sciences; Maciej Kamaszewski, PhD, DSc from the Warsaw University of Life Sciences; Elżbieta Teschner, MSc from the University of Opole; Dorota Konietzko-Meier, PhD and Sudipta Kalita, MSc from the University of Bonn (Germany); as well as Prof. Bruce M. Rothschild of the Carnegie Museum of Natural History (Pennsylvania, USA). The research was financed by the National Science Centre as part of the research project entitled Osteopathology in the fossil record as a carrier of paleoecological and palaeoepidemiological information.