This site uses cookies
By using this website you agree to the use of cookies in accordance with the current browser settings.
Learn more Accept
Go to main content
COVID-19 security status
Level 0: no restrictions, basic health and safety at work rules
Coronavirus Statistics
home link Type articles What happened over 300 million years ago?

What happened over 300 million years ago?

In the history of our planet, mass extinctions have occurred many times. As a result, the number of organisms has been changing rapidly. One of such extinctions happened at the end of the Devonian, about 358 million years ago. More than 50% of all species of marine organisms did not survive the changes that took place at that time. Traces of these events are still visible in the sediments researched by Agnieszka Pisarzowska, PhD, from the Faculty of Natural Sciences of the University of Silesia.

Agnieszka Pisarzowska, PhD, specialises in the analysis of changes in the content of stable isotopes, mainly carbon and oxygen, in sedimentary rocks. The fossil environment that she is particularly interested in is the Middle Palaeozoic. “These are geochemical analyses. I conduct them in order to better understand the history of regional and global events that took place in the geological history of the Earth” says the scientist.

These events are biotic crises such as the great Devonian extinctions. Scientists are trying to answer the question of what led to this and similar catastrophes in the history of our planet. Of course, there could be many reasons, and the ongoing processes often influenced each other, which makes it difficult to find an unambiguous answer to a question bothering experts.

Traces of these processes remain in the sediments in their mineralogical and geochemical composition.

“I work with many specialists, to make the possibilities as broad as possible. We want to characterise the samples taken as accurately as possible, because only thanks to this, the interpretation can be credible” says the researcher.

“I register isotope changes in two scales. Firstly, I am interested in event intervals, i.e. any anomalies that are the result of global processes that have a significant impact on organisms. Secondly, I also study samples from the so-called quiet periods, although also in this case changes in the carbon cycle can be observed. On the basis of my research and data obtained from colleagues studying other fields of geology, I try to reconstruct the conditions that prevailed during the sedimentation of the analysed sediments. I am primarily interested in the sediments that were formed in the marine environment, both in the epicontinental sea, such as the Baltic Sea today, or in the ocean” she adds.

Agnieszka Pisarzowska, PhD, also investigates the influence of diagenesis, i.e. various factors modifying the isotope signal, in order to assess on this basis which record actually relates to the processes she is interested in, and which is the result of later changes modifying the original trace. This is crucial for further interpretations of the palaeoenvironment. Her scientific interests also include determining the sources of origin and directions of transport of material created as a result of weathering rocks on land and ejected during volcanic eruptions.

From a geochemist’s perspective, both time and place are particularly important. Most of the events described by Agnieszka Pisarzowska, PhD, concerned the Devonian, i.e. the period from 417 to 358 million years ago.

“My history of analysing stable isotopes began with the punctata event that occurred at the border of the Lower and Middle Francs about 380 million years ago. This was the subject of my doctoral dissertation, which I was preparing as part of a grant led by Prof. Grzegorz Racki” says the geochemist.

Her task was to analyse the record of carbon and oxygen isotopes. As it turned out, it was at the border of the Lower and Middle Fras that the greatest perturbations of the Devonian carbon cycle were observed. What is more, scientists discovered that they are dealing with changes of a global nature.

In practice, this means that a similar isotope signal can be observed in many places around the world. It could have been the result of increased volcanic activity or an impact, as a result of which processes took place that left a geochemical trail in various places on our planet.

“The word “global” is of a particular importance from the perspective of geochemist. We know that millions of years ago the arrangement of the oceans and continents was very different from what we know from today’s maps. Therefore, we try to find such geological profiles, cores or exposures where we can trace the geochemical record on various continents existing in a given geological period.” explains the researcher “If we manage to find research profiles from the area of different paleocontinents and in each of the profiles we observe the same type of anomalies in the distribution of isotopes over a specific period of time, then we can talk about global events, i.e. events that had consequences on a global scale” she adds. Today, an excellent example of such global events are climate changes, which also took place in the history of the Earth. We can track them, among others, due to changes in oxygen isotope ratios. 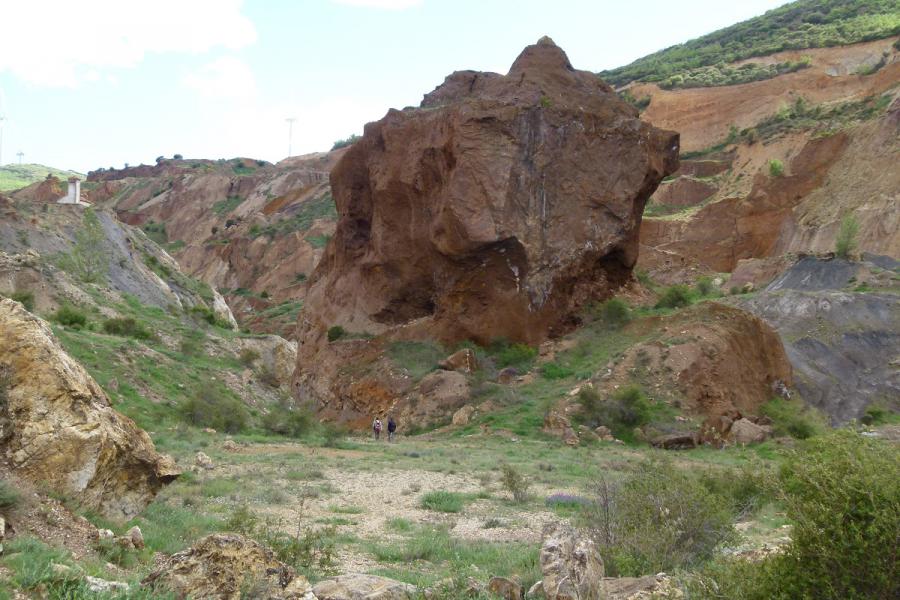 We can also describe regional events that occurred in a small area. As she explains, if changes in isotope relations were noticed in the profiles of today’s Świętokrzyskie Mountains, e.g. in the middle Devonian, then we would be dealing with transformations that took place within one basin or only part of it.

Thanks to geochemical research, it is also possible to identify potential perpetrators of the investigated event. In the case of sediment analysis, scientists can check whether they are dealing with an influx of a light isotope or an enrichment with a heavier isotope. Then they wonder what could have led to this state. It may be the result of weathering rocks rich in organic matter, an impact, or volcanism as a result of which huge amounts of isotope-light 12C carbon are released. Further geochemical analyses make it possible to narrow this group down and indicate with high probability the key cause of the anomaly.

In the event of the great Devonian extinction, the team of Prof. Grzegorz Racki, in the work of which Agnieszka Pisarzowska, PhD, participated, indicated volcanism as the main, though not the only source of the disaster from 358 million years ago.

“From my perspective, global events are particularly interesting. In order to study them, I often have to obtain material from different parts of the world. I love to travel, that’s why it’s a dream job for me.” admits the scientist.

Agnieszka Pisarzowska, PhD, has repeatedly visited the Polish paradise for palaeontologists and geochemists, i.e. the Świętokrzyskie Mountains. She also took samples from, among others, the Rhine Slate Mountains, the Carnic Alps, the Ardennes, the Pyrenees, as well as in Montana and Oklahoma, where there are fantastic exposures of Upper Devonian sediments.

“We are interested in the most fresh, non-weathering material that will be suitable for geochemical research. Our job is that layer by layer we describe exactly what we see. We measure the thickness of the layers, determine the type of rock and all the features that can be seen “with the unaided eye”, and identify the organisms that may have lived there. Then, depending on how long the unveiling is of interest to us, we collect samples with different accuracy” explains the scientist.

If scientists have a record of, for example, an event that took place on the Devonian-Carbon boundary, then they take samples from the so-called background, i.e. from the intervals that preceded and followed the event, in order to have comparative material and be able to determine whether certain processes have started earlier. Their main goal is also to collect the appropriate number of samples from the segment covering the event itself, even at two-centimeter intervals, in order to be able to characterise it as accurately as possible.

“The above-mentioned description of the punctata event is certainly a great success for me. First, it was analysed as a regional event, then, thanks to the fantastic intuition of Prof. Grzegorz Racki – as a global event” says the co-author of the reserach.

She also adds that she participated in the work of the team that described a new geochemical index, called the syngenetic pyrite index. The research concerned the geochemical analysis of pyrite. Well, pyrite can be formed either in the water column or in the sediment. Thanks to the new index, it is possible to more accurately characterise the conditions prevailing in the palaeomirans and even more accurately identify events that took place hundreds of millions of years ago.

The article entitled “What happened over 300 million years ago?” was published in the June issue of “Gazeta Uniwersytecka UŚ (University of Silesia Magazine)” no. 9 (299). 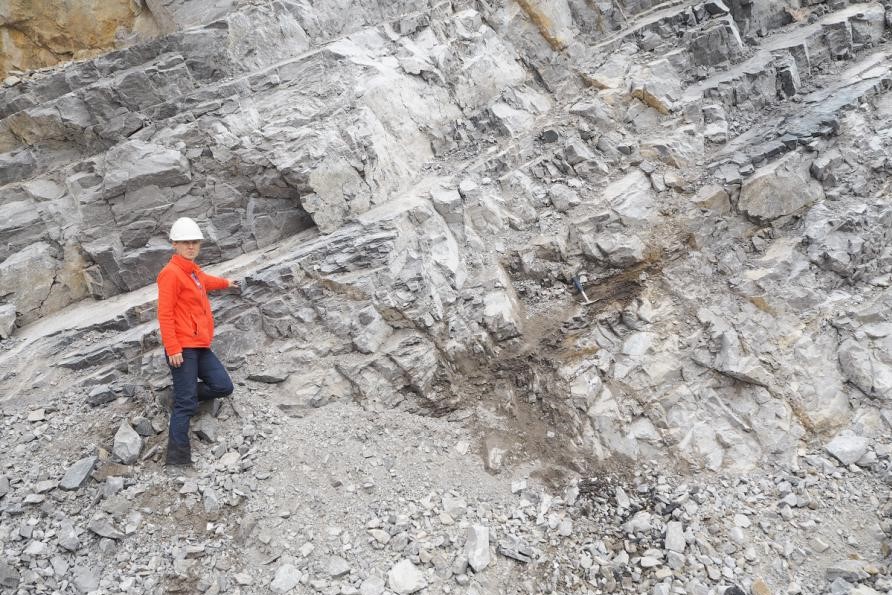