This site uses cookies
By using this website you agree to the use of cookies in accordance with the current browser settings.
Learn more Accept
Go to main content
COVID-19 security status
Level 0: no restrictions, basic health and safety at work rules
Coronavirus Statistics
home link Type articles ‘No Limits’ | Agreements Kept Are Wars Avoided

International law is a beautiful standard and a great benchmark, but its day-to-day effectiveness is primarily determined by regional solutions. Numerous laws in force in countries around the world regulate human rights, but it is one thing to have a noble idea ‘on paper’ and another to implement it. How do we enforce laws to protect individuals?

Magdalena Półtorak, PhD from the Institute of Law of the University of Silesia – magdalena.poltorak@us.edu.pl

Vulnerable persons are not only women, children, and people with disabilities. This group also includes the elderly, pregnant people, single parents, victims of human trafficking, severely ill people, those suffering from mental disorders, as well as people who have been victims of rape, torture, and other forms of physical, mental, or sexual abuse. Any person, due to certain circumstances, deficiencies, or dysfunctions, might be unable to fully exercise their rights.

The role of law (including international law) is to ensure equal opportunities. Moreover, in the era of mass migrations Europe must not only manage them, but also (additionally) implement the existing legal norms more effectively and, if necessary, modify them on an ongoing basis.

Until the late 1990s, asylum seeking in Poland was only an occasional phenomenon. A country which rebuilt itself after a political transformation did not entice foreigners looking for asylum to pursue a permanent residence, and most migrants treated Poland as a transit country. In comparison with other European countries, Poland’s experience in granting refugee status was quite limited. Poland ratified the Geneva Convention relating to refugee status only in 1991 and the first refugee centre was established in May 1992 (in Podkowa Leśna- Dębak). It serves as the primary facility to this day. 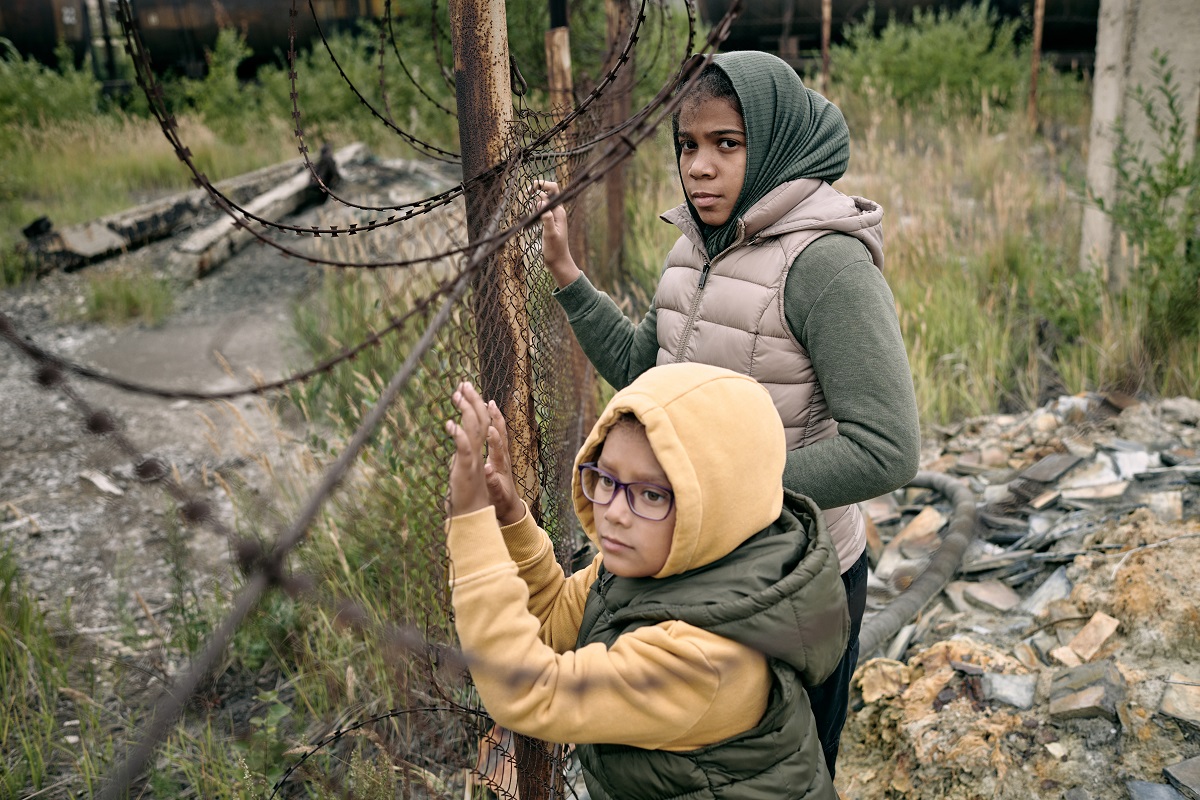 However, the situation changed drastically in 2014 when Europe became the destination for masses of people from Africa and the Middle East trying to escape warfare, as well as migrants from countries such as Kosovo or Afghanistan, seeking better living conditions. The refugee and migration crisis, the largest one since World War II, began in Europe in 2015 when over 1.75 million people reached the Old Continent. Soon it became apparent that a major reform of the Common European Asylum System (CEAS) was needed. The solidarity expressed by European countries was also indispensable in lifting the burden of this crisis.

Although Poland had not accepted a single refugee from the quota assigned to the Member States by the EU Council until mid-May 2017, the country felt the consequences of the migration crisis in 2021, when thousands of people arrived at the Polish and Belarusian border, brought there by the Lukashenko regime from the Middle East and Afghanistan, as well as a year later, due to mass migration caused by Putin’s aggression in Ukraine. In the course of four months, 4,551,000 Ukrainians arrived in Poland, out of which around 2 million remained within the borders of our country. However, providing aid on such a large scale requires institutional support, which should be based on clear-cut legislation.

International law in the face of a migration crisis

According to Magdalena Półtorak, PhD, from the Faculty of Law and Administration of the University of Silesia in Katowice, who conducts research on human rights, the (universal) international law is a beautiful standard and an excellent reference point, but ultimately its effectiveness is decided by the specific regional solutions.

The international human rights law is based on the documents developed by the United Nations. Somewhat naive ideologists affected by the atrocities of World War II believed that this organisation, established in October 1945 to uphold peace and international security, would also guarantee human rights. The phrase No more war was to resound until the end of time, whereas military aggressions were supposed to be deterred by, among others, the Universal Declaration of Human Rights, international covenants on human rights, the Convention on the Prevention and Punishment of the Crime of Genocide, and a number of other ‘sectoral’ agreements on, e.g. prohibition of torture, rights of people with disabilities, and children’s rights.

‘If all signatories of the UN Charter respected the agreements, there would bo no more wars: in Korea, Cyprus, Middle East, Persian Gulf, former Yugoslavia, Rwanda, and Afghanistan. These conflicts show the superficial nature of international agreements’, concludes the lawyer.

With regard to regional solutions on granting refugee status, it is particularly important to take a look at the aforementioned asylum system of the European Union. The status of the living instrument, on the other hand, is still applied to the European Convention on Human Rights adopted at the Council of Europe. This document protects, among others, the right to life, and prohibits torture and mass displacement of foreigners.

Refugees are not monolithic

In some respects, EU law was ready for migratory movements. To a large extent, it also provided special guarantees for vulnerable groups. However, no one could have predicted the scale of this phenomenon, as the migrants from Ukraine totalling several million people have shown, and the refugee crisis has demonstrated that the asylum system needs a thorough reform. Although discrimination is obviously prohibited, it is not possible to treat all refugees and their needs in the same way.

‘CEAS not only recognises the needs of vulnerable persons, but also aims to accommodate them. However, the risk is that this “labelling” may result in stigmatisation correlated with the person’s dependency or vulnerability’, says the lawyer.

The conflict on the border between the European Union and Belarus and the hundreds of refugees subjected to the so-called push-backs (turning back people who cross the border illegally), together with the consequences of the war in Ukraine, have shifted the perception of the migration problem not only among policy-makers, but also among Poles themselves. The undeniable presence of women, children, elderly people, and people with disabilities among the refugees has caused this category to no longer be perceived as monolithic. Although the rights of the aforementioned groups are individually protected in theory, in the migratory context it turns out that the possibilities of exercising these rights are clearly limited. Ukrainians, who are much closer culturally and mindset-wise to us, exposed the inadequacy of the regulation required to effectively ensure care not only for people fleeing war, but also for people who have different needs under these circumstances (e.g. single mothers and their children or elderly people who have suffered additional physical and psychological damage due to the war).

‘As far as migration law in Poland is concerned, we have made a huge breakthrough’, emphasises the lawyer. ‘At the beginning of the 1990s, we had no legal norms covering refugees. The first decisions on granting refugee status were issued not based on a law, because there was none, but on… the UNHCR (UN Refugee Agency) manual. Since then, we have been making good progress in catching up, but Polish migration law must be amended on an ongoing basis’.

Has the attitude of Poles towards people seeking international protection also changed? We still seem much more willing and eager to help our neighbours than people who come from Syria, Afghanistan, Iraq, i.e. countries that are culturally distant, even though they face the same problems — fleeing war, terror, violence, cruelty. It is not only a legal issue, but, above all, an educational one.

‘Mothers feeding their children under a barrage of bullets suffer in the same way, regardless of their skin colour, religion, clothes, language, or latitude, and every child’s pain and tears are the same’, emphasises Magdalena Półtorak, PhD.

Universal does not mean perfect

Since the inception of CEAS, which has evolved and is being modified on an ongoing basis, the needs of vulnerable persons have been recognised. The consensus is that being vulnerable means being particularly exposed to threats, as well as being easily hurt physically, mentally, or emotionally. Thus, people seeking international protection have been considered a kind of subcategory of vulnerable persons for some time now. This is an EU response of sorts to the universal (UN) standard. However, we should bear in mind that it has been developed primarily on the basis of soft law, i.e. the so-called soft documents issued, in this case, by the UNHCR, which are not legally binding.

Public international law is very comprehensive and, at the same time — although it ‘matures’ slowly — solid and stable. Its effectiveness, however, relies primarily on the goodwill of the states that take seriously the principle stating that agreements must be kept (Latin: pacta sunt servanda). Similarly, there is no entity that can ‘punish’ states for failing to fulfil their obligations.

‘The international human rights law is a perfect example of why it is much easier to make declarations than to abide by them. International standards are implemented only to the extent that the governments of individual countries and the “climate” surrounding certain phenomena allow’, the lawyer states.

At the same time, it should be stressed that despite its sustainability, the system needs adjustments every now and then, especially on the basis of regional (EU) solutions. When the guarantees of international protection were created decades ago, neither the border storm nor the four million migrants ‘at the doorstep’ in four months could have been predicted. Given the pace of the events, it poses a major challenge, especially for lawyers, to flesh out the legal details that necessarily could not have been included in the existing international documents. At the same time, we must make note of the fact that the countries under the so-called migration pressure will have a different perspective from the rest. In this case, complete solidarity is rather wishful thinking.

‘Human rights are undoubtedly a topic which will never be definitively settled. After all, their effective protection requires permanent measures to prevent the lowering of (quite good) international standards and a whole lot of goodwill’, concludes Magdalena Półtorak, PhD.

The article entitled ‘Agreements Kept Are Wars Avoided’ was published in No Limits No. 2(6)/2022, the popular science journal of the University of Silesia.