This site uses cookies
By using this website you agree to the use of cookies in accordance with the current browser settings.
Learn more Accept
Go to main content
COVID-19 security status
Level 0: no restrictions, basic health and safety at work rules
Coronavirus Statistics
home link Type articles „No Limits” | Border towns and cities

„No Limits” | Border towns and cities

Border regions are particularly interesting due to their often turbulent history, during which their nationality changed and where different ethnic and cultural influences mixed. Cieszyn is just such a place, and the fact that it is located on the Polish-Czech border only emphasizes its uniqueness. Dr Agnieszka Sikora writes about the history of the town and how within it the present is intertwined with the past.

Dr Magdalena Szalbot from the Institute of Culture Studies of the University of Silesia – magdalena.szalbot@us.edu.pl

Cieszyn is a town in southern Poland on the border with the Czech Republic, on the Olza river. It only has 32,000 inhabitants, but it boasts a long and rich history. The town’s development and shape were influenced by shifting state borders and thus by various cultures, languages, religions, and traditions.

“Cieszyn is a city on the border and with a border in itself. Just like every borderland, this Polish-Czech region is a specific area where we can observe the clash of linguistically, socially, and historically different groups, which are often burdened with negative stereotypes about their neighbors from the other side of the river,” says Dr Magdalena Szalbot from the Faculty of Arts and Educational Science of the University of Silesia, a researcher of borderland and multicultural issues, especially towns and cities divided by borders. 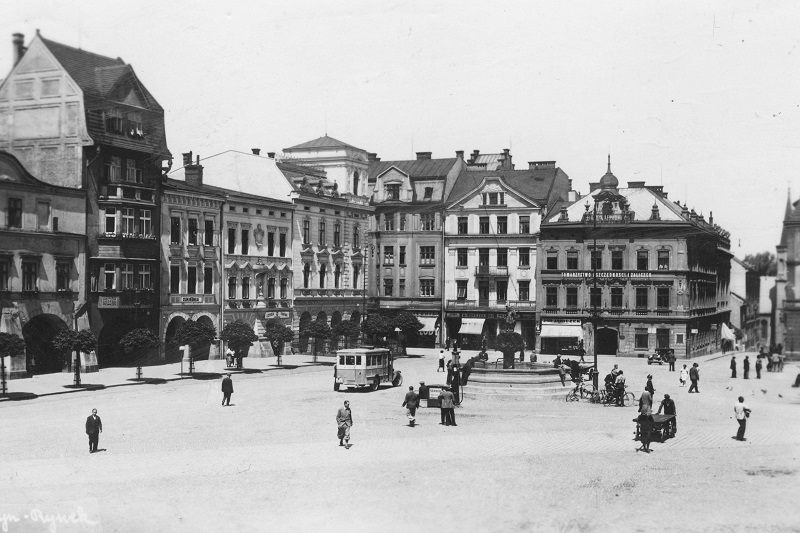 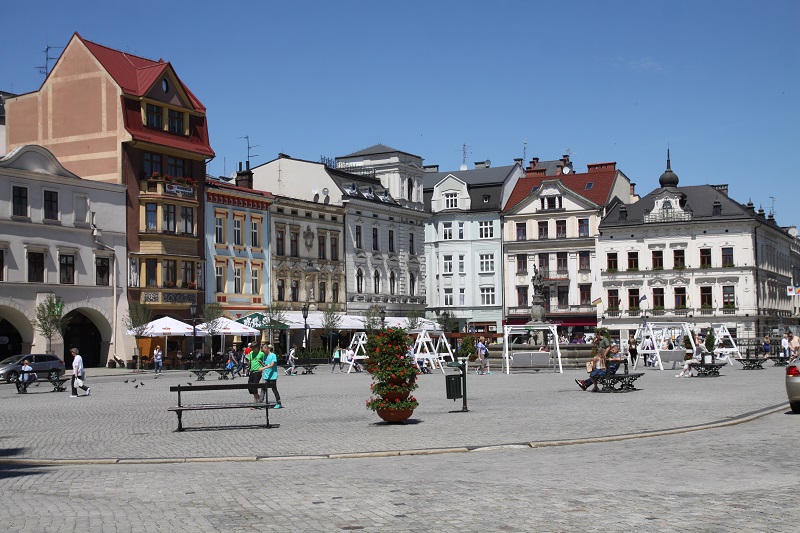 From the 7th to the 9th centuries, there were several Slavic settlements belonging to the Golensizi tribe in the vicinity of today’s Cieszyn. After the destruction of the Golensizi strongholds, probably by the Great Moravia, the settlement moved to a hill now called Góra Zamkowa (i.e., “castle top”). In the 10th century, the settlement was transformed into a fortified town and incorporated into the territories under the rule of the Piast dynasty by Duke Mieszko I. It grew rapidly and gained importance as a frontier watchtower on the southern outskirts of the lands of the nascent Poland. During the existence of the early medieval city, a suburb developed on the eastern side, which became the basis for the later Cieszyn in the Middle Ages. The name Tescin was first mentioned in a bull of Pope Hadrian IV in 1155.

In the mid-11th century or around 1180, the first religious building was built there, the Romanesque rotunda of St. Nicholas, which has survived to this day.

At the beginning of the 13th century, Cieszyn received town privileges (borough rights) under the law of Lwówek Śląski. At the end of the 13th century, there was an independent Duchy of Cieszyn. In the 14th century, the town developed quickly; a stone castle was built in place of the wooden one, the mayor’s office and the town council were established, and their seats were located in the newly built town hall. In 1374, a new foundation of Cieszyn under the Magdeburg Law took place. The 15th and 16th centuries were also a time when the town flourished. In the middle of the 16th century, Reformation began to develop in the Duchy of Cieszyn, and Protestantism became the dominant religion of the region.

During the Thirty Years’ War (1618-1648), Cieszyn was destroyed to a large extent. In 1645, the town was plundered by Swedish troops. In the middle of the 17th century, Cieszyn came under the rule of the Austrian Habsburgs, which caused a period of economic stagnation in the entire region. At the beginning of the 18th century, construction of a huge church began. It is now the largest Lutheran church in Poland and it belongs to the Evangelical Church of the Augsburg Confession.

Over the next years, the region was plagued by wars; the town was destroyed by numerous disasters (fires and even an earthquake), and successive rulers rebuilt Cieszyn in their own fashion. In 1839, the Piast castle was demolished, and on the castle top, by order of Prince Charles Habsburg, a classical palace surrounded by a park was built. In 1848, during the Springtime of the Peoples, Cieszyn became an important center of Polish national thought. At that time, the first Polish newspaper was published in the town. In 1869, a railway connection was built in Cieszyn, a fact that contributed to the acceleration of its economic development. On the west bank of the Olza river grew an industrial district – the current Czeski Cieszyn (Czech: Český Těšín).

After World War I, Cieszyn and the whole Cieszyn Silesia became a disputed territory between Poland and the new state of Czechoslovakia. Border disputes, including armed attacks, led to a division of Cieszyn Silesia. The town itself was divided geographically along the Olza river (on July 28th, 1920 at a peace conference in Spa, Belgium). In 1938-1945, Cieszyn and Český Těšín, were again combined into one town. First, in October 1938, Polish troops seized TransOlza Silesia (Polish: Zaolzie) together with Český Těšín. Afterwards, in September 1939, the whole Cieszyn Silesia was incorporated into the Third Reich, but shortly after the end of World War II the geographical division was restored. 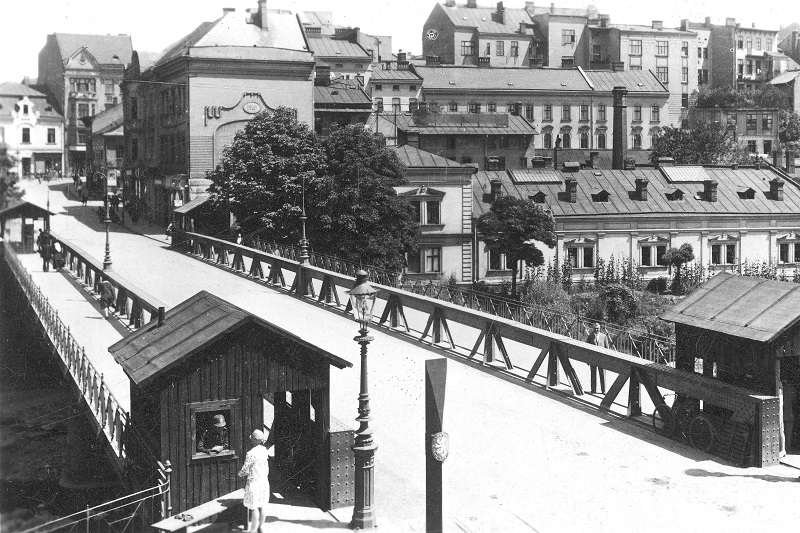 Border towns and cities. A border in a city

The uniqueness, development, culture, and social processes of Cieszyn are influenced by the fact that it is a town located on the border of two countries. Towns or cities divided by a national border have been quite a rarity in Europe. On the Polish borders, similar examples are Frankfurt (Oder) and Słubice, Guben and Gubin, or Görlitz and Zgorzelec.

In Cieszyn, as a result of such demarcation of the Polish border, individual fragments of the urban structure were artificially separated from each other. Subsequently, these split fragments became independent towns, and the municipal infrastructure separated by the “surgical cut” had to be complemented in the other part of the city. After the end of World War I, Cieszyn was divided along the Olza river. The railroad station, the water supply center, and the gasworks became the town’s Czechoslovakian part, which was called Český Těšín, whereas the historic old town with a market square and a castle, the power station, the theater, official buildings, schools, and many churches was incorporated into Poland. The division of the town significantly inhibited the development of both parts. On the Polish side, residents were cut off from industrial plants, which fell to the Czech side, and the inhabitants of Český Těšín lost the possibility to work in culture, education, and offices. Moreover, the Polish side of the city was deprived of a railway connection with the rest of the country. It is also worth to mention the streetcar system which existed in Cieszyn between 1911 and 1921 and connected both sides of the Olza river. In 1920, the town was divided into Polish and Czechoslovakian parts, but the streetcar continued to run without changes, however, increased controls on the border bridge prevented smooth communication. On April 2nd, 1921, a decision to liquidate the streetcar line and to sell the rolling stock was made. The depot building and the rosettes for the overhead contact line have been preserved to this day in Cieszyn. You can see them while walking down the Głęboka street.

It can be said that after the Central and Eastern European countries joined the Schengen area, the two sides of the Polish-Czech border came closer to each other again. Although the river is still in the same place, it can be crossed almost without being noticed, which many town residents and tourists do on a daily basis. These changes had a positive effect on the development of the border town. The local economy has been activated, projects for both parts of the town have been carried out, including, for example, the Garden of the Two River Banks and the Bridge Park as well as the establishment of many different cross-border institutions serving people living in both parts of the town and in the entire Silesian Euroregion Śląsk Cieszyński – Těšínské Slezsko. In addition, cultural events are organized, such as the annual film review Kino na Granicy/ Kino na Hranici (Cinema on the Border), which has been taking place in Cieszyn since 1999 and presents Polish, Czech, and Slovak feature films and retrospectives of artists with numerous accompanying events such as concerts, art exhibitions, discussion panels, meetings with artists, and city tours. The festival has been held in one city for over two decades – on two sides of the border.

For centuries, Cieszyn Silesia lay at the crossroads of several important communication and trade routes. It should also be remembered that, depending on the political situation, the region was ruled by different countries throughout history. It was inhabited not only by Czechs, Slovaks, and Poles, but also by representatives of other nations – Germans, Hungarians, Vlachs, and of different religions – Catholicism, Protestantism, and Judaism.

Jews were a special group in Cieszyn. The Jewish community appeared in Cieszyn in the 16th century, although for a short time, from the second half of that century, imperial regulations prohibited Jews from remaining in Silesia. A permanent Jewish settlement in Cieszyn did not begin until the 1730s, and it expanded considerably at the beginning of the 18th century, when Emperor Charles VI issued a tolerance edict for Jews. The Jewish population gained full civil rights in the second half of the 19th century, after political reforms in Austria. Jews soon occupied an important place in the economic life of Cieszyn. They opened prosperous companies and factories and founded synagogues, societies, and a Jewish cemetery. In the interwar period, Jews living in Cieszyn constituted from 10 to more than 15% of the population of Cieszyn County, and most of them identified as loyal citizens of the Polish state and cooperated well with other inhabitants of the town.

During World War II, the non-German population was discriminated against. Jews were deported to concentration camps where most of them died, Jewish synagogues and houses of prayer were demolished, cemeteries were closed, and factories were taken over.

This religious, cultural, national, and ethnic diversity shaped the inhabitants of Cieszyn and Cieszyn Silesia, who began to refer to themselves as tu stela (“from here”). 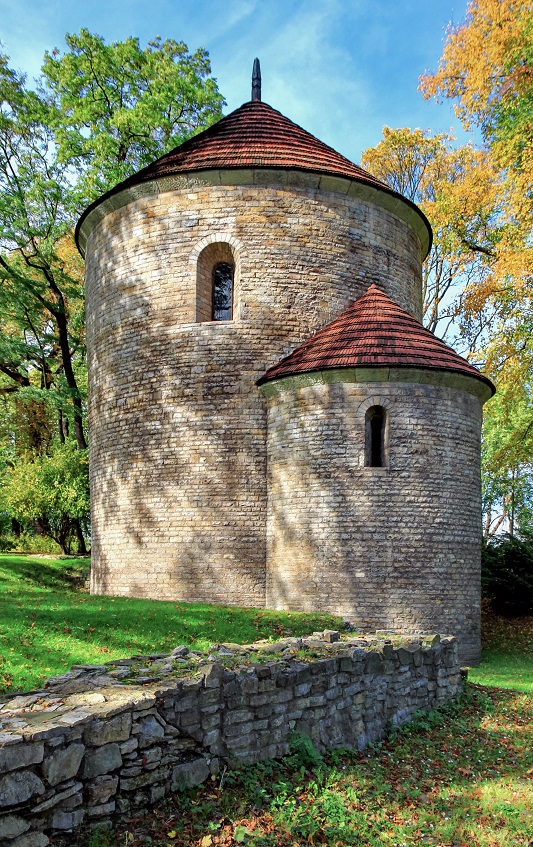 “People living in Cieszyn Silesia are aware of their cultural distinctness and are proud of it, but they also remember difficult episodes from the past, especially the older generation does,” says Dr Magdalena Szalbot.

The article “Border towns and cities” was published in “No Limits” no. 1(5)/2022, the popular science magazine of the University of Silesia.