This site uses cookies
By using this website you agree to the use of cookies in accordance with the current browser settings.
Learn more Accept
Go to main content
COVID-19 security status
Level 0: no restrictions, basic health and safety at work rules
Coronavirus Statistics
home link Type articles “No Limits” | Urban Rivers

For centuries, people have been trying to tame nature in order to benefit from it and adapt it to their own needs. Some of these actions turn out to be catastrophic, and their effects may not be visible until decades or even centuries. Maria Sztuka discusses mistakes in river management and the results that they brought, as well as ways to remedy many years of neglect.

Prof. Andrzej Kowalczyk from the Institute of Earth Sciences of the University of Silesia – andrzej.kowalczyk@us.edu.pl

Rome, Paris, London, Vienna… Europe’s most beautiful metropolises owe their fame and power largely to the rivers on which they are located. Since the dawn of time, people looked for the most convenient places to settle and chose the valleys of life-giving rivers, which fed, watered, fertilized crops, collected waste, served as fast communication routes, and in situations of danger also played a defensive role. In Leonardo da Vinci’s design of the ideal city of 1487, the river was the sine qua non. It provided people not only with opportunities for maintaining proper hygiene but also for transporting goods which allowed for the reconciliation of practical and aesthetic requirements. 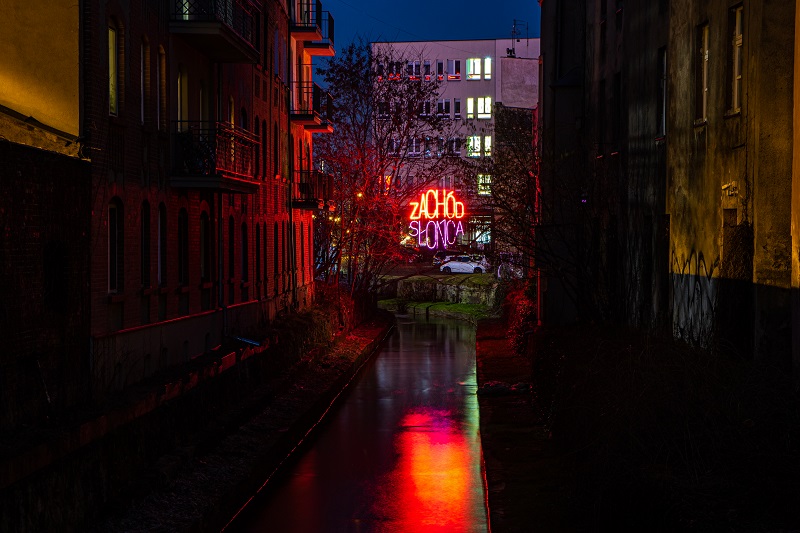 With time, however, people needed more living space and wanted to control nature, so they started to “straighten” rivers, drain industrial wastewater into riverbeds, drain floodplains, and build housing developments on them. Uneven quays were tamed by being flooded with tons of concrete, and high embankments along the bed were to prevent floods. The “reformers” were guided by the belief that closing a river in its riverbed and speeding up its current in case of excessive rainfall would prevent the river’s waters from spilling into the valley. Time has verified these concepts. The effects of restraining rivers have become apparent in a very dramatic way at the end of the 20th and the beginning of the 21st centuries. The “millennium flood” in July 1997, which hit Poland, Czechia, Germany, Slovakia, and Austria, claimed over a hundred lives and caused material losses in the billions of dollars. A series of floods that affected Germany, Belgium, Italy, Austria, and Romania in 2021 had similar effects. From a life-giving boon, rivers turned into terror-bearing elements. However, it is not the picturesque mountain streams or the majestic Rhine, Danube, or Seine that bring terror. The reasons for large-scale destruction include both climate changes and anthropogenic factors: regulation of large sections of rivers, obstruction of riverbeds and development of polders, i.e., natural floodplains, which during floods allow excess water to spill out of the riverbed and to be naturally retained. While mighty rivers such as the Rhine, Thames, Danube, Seine, Vltava, Tiber, or Vistula remain a constant boast and tourist attraction, the fate of small rivers in cities often trapped within concrete walls was quite gloomy: some were hidden underground, while others turned into stinking sewers. 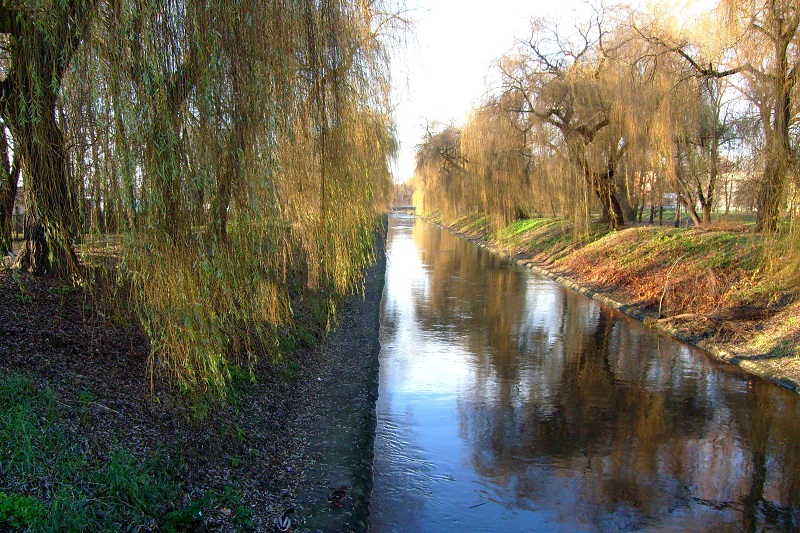 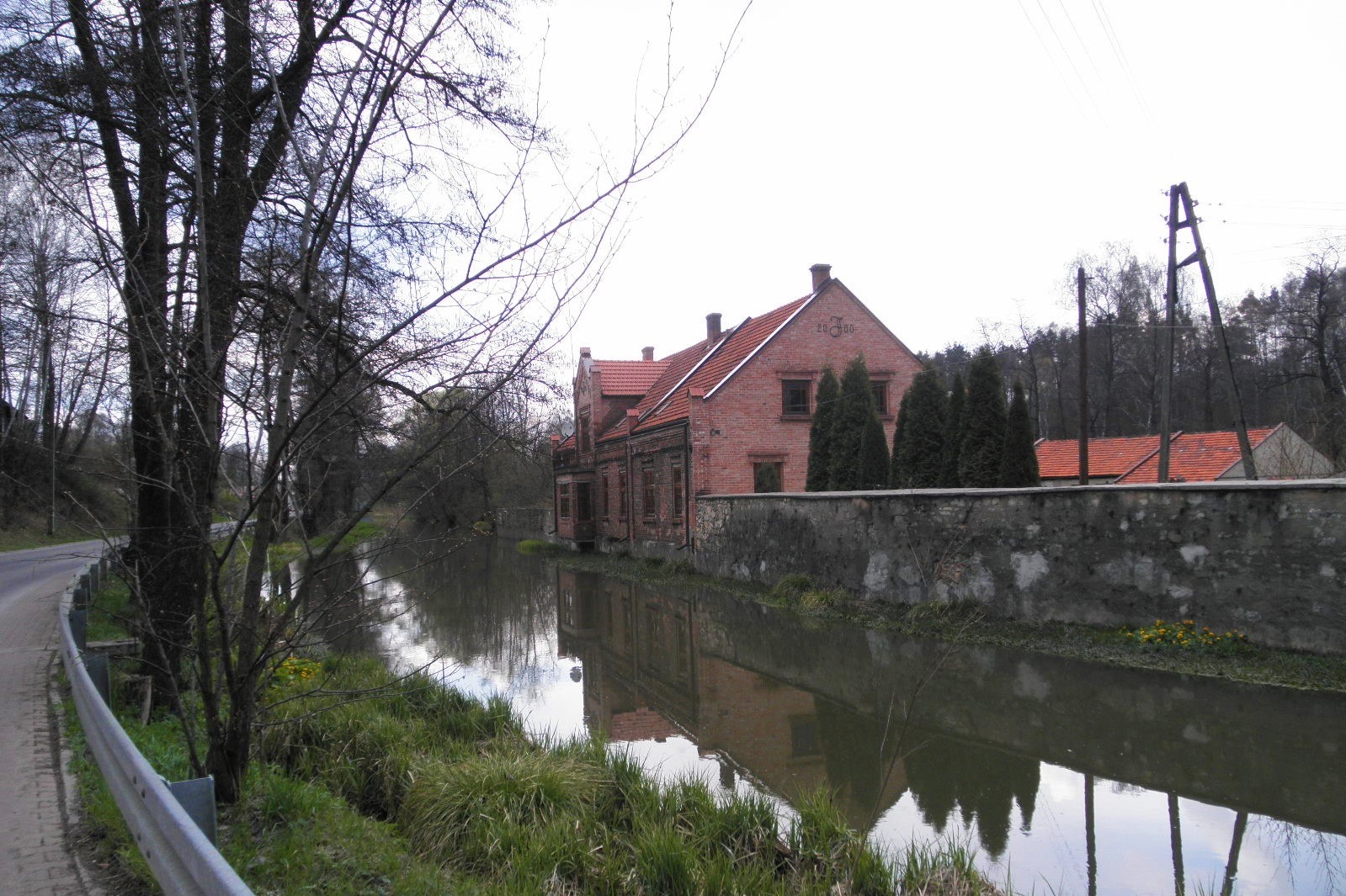 The river should be the valley’s host

The taming of rivers has been met with severe criticism. Many modern publications contain lists of errors that have contributed to the current state of things. However, Prof. Andrzej Kowalczyk, hydrologist from the Institute of Earth Sciences at the Faculty of Natural Sciences of the University of Silesia, who specializes in water management and environmental geology, is not in favor of such easily formulated accusations against the initiators of river regulation. According to the scientist, the decisions made in the 19th and early 20th centuries corresponded to the level of knowledge at that time. Today, the risk of floods can be dealt with and its effects reduced not on the basis of long-term forecasts (as builders did in the past), but on the basis of constantly updated results of monitoring carried out in individual basins, as well as interdisciplinary research of extreme phenomena (whose frequency is increasing). According to Prof. A. Kowalczyk, an example that shows how interference in the natural environment can turn against humans is the Rhine, one of the longest rivers in Europe (766 miles) – straightened, most channelized, with strengthened banks and high embankments. The first corrections of the Rhine date back to the beginning of the 19th century when, in order to speed up the current of the river, works were undertaken not only to narrow it, but also to strenuously straighten the river, thus depriving it of bends and meanders. While channelization of the river allowed for year-round navigation, the development of the coastal areas reduced the floodplain areas by over 30%. Catastrophic floods in the Rhine basin (e.g., in 1983, 1993, 2021) caused by heavy rainfall revealed the dramatic ineffectiveness of hydrotechnical measures made on the river and its tributaries – roads, houses, and industrial facilities were put under water.

Another example of wrong decisions that we are paying for is the Oder/Odra river. Flood hazards in its basin are of course due to meteorological, climatic, and natural conditions, but anthropogenic factor, such as regulatory works that shortened the course of the river by 160 km, or massive hydrotechnical buildings, have also largely contributed to them. The intensive development of housing construction on floodplain terraces (e.g., in Wrocław or Opole) was an obvious and costly mistake. According to the scientist, the valley should be hosted primarily by a river, not by humans. The 21st century brought many changes to the relationship between cities and rivers. Residents supported by scientists demanded riverside green areas, noticing not only the economic potential in the often forgotten canal, but above all its cultural aspect, helping create new social interactions. 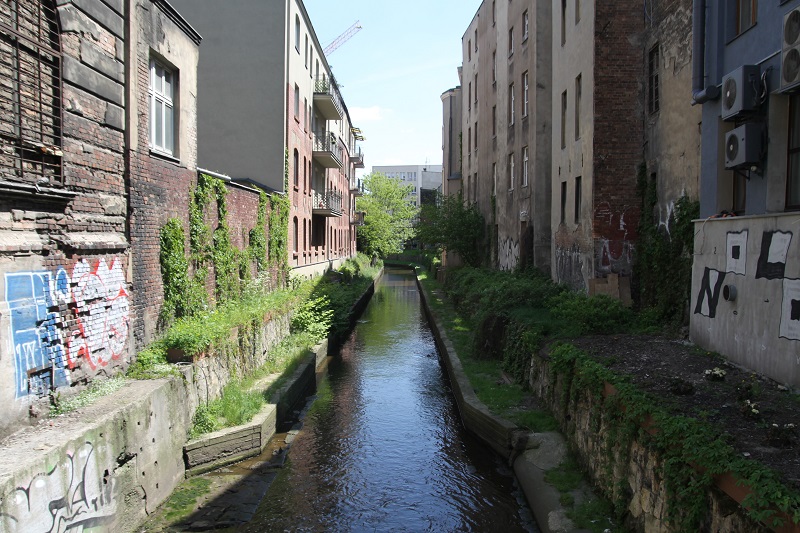 Rawa river in the center of Katowice | Photo: Agnieszka Sikora

Many rivers in cities still perform their original functions. They receive excess water resulting from both short-term and extreme rainfall as well as treated municipal and industrial wastewater. Taking care of efficient operation of sewage treatment plant slowly restores biological life and rebuilds degraded ecosystems. Although this is a long-term process, the effects of the actions taken are already noticeable. The way local communities perceive troublesome streams, canals, and rivers has also changed. When foul, stinking water flowed in them, inhabitants avoided these places with disgust; when flocks of birds appeared on the transparent surface, and fish in the water, even the forgotten river names returned. An excellent example is Rawa in Silesia, a less than 20 km long stream in the Vistula basin, which starts at the Marcin pond in Ruda Śląska. Passing successively through Świętochłowice, Chorzów, and Katowice, it reaches the border with Sosnowiec, where it flows into the Brynica river. At the beginning of the 19th century, Rawa was still a wild stream, but by 1893 intensive industrialization already caused the disappearance of fish and death of biological life. The river became a victim of predatory and greedy industry. In fear of flooding, its banks were concreted over and its bed straightened, which was the best solution according to the knowledge available at that time. In order to obtain land for development, the river was subdued, converted into a channel, and the swamps were drained. It was regulated several times, partially hidden underground, and thus experienced “reanimation.” Due to its location, Rawa is still of great importance for Katowice, as it is the main rainwater catchment for most of the city. Prof. A. Kowalczyk, who for years has been following and participating in discussions on the revitalization of the river, believes that the return of biological life to the river may be caused, among others, by the slowing down of the water current. According to the hydrologist, this effect can be achieved by restoring the bars to the river. When huge amounts of industrial sewage were flowing through the riverbed, a swift current was indispensable, as it slowed down the silting up of the riverbed and ensured self-purification from suspended solids, which were pumped into the river by the surrounding mines, among others. Today, this current should definitely slow down.

This is a topic that almost all riverside cities are struggling with. Concreted catchment areas of rivers, roads sealed with asphalt, squares, streets, and even promenades tightly covered with tiles, groves cut out, riverbanks turned into parking lots lined with large cobblestones, and the constant shrinking of green areas seized for the construction of new investments – this is just the beginning of the list of “sins” that make life in agglomerations increasingly uncomfortable. Urban heat islands have become a plague of the 21st century. This microclimate phenomenon results, among others, from a shortage of biologically active surfaces, which are being displaced by dense building development. When flows are too low, even prolonged and intense downpours will only briefly raise the water level in the river. Instead of soaking up and slowly recharging the river with underground runoff, the water almost instantaneously finds its way to the riverbed. Lack of natural floodplains, removal of wetlands and concreted catchment areas prevent groundwater recharge, and as the hydrologist reminds us, the natural environment is a reservoir of water, since it retains resources and ensures that it flows more slowly and stays in the environment longer. Hardened surfaces not only raise the temperature in the city by blocking the uptake of water by the ground, but also contribute to the occurrence of floods and increase their effects.

Well-maintained rivers not only provide safety; they can also be an oasis that encourages people to spend time in nature, even in an industrialized city.

The article “Urban Rivers” was published in “No Limits” no. 1(5)/2022, the popular science magazine of the University of Silesia.