In August 2022, members of the 58th polar expedition of the University of Silesia to Spitsbergen (Svalbard) returned to Poland. The expedition was the next step in a series of field research on changes in the Arctic’s environment due to accelerated climate warming. Quantitative monitoring and observations of glacier changes in southern Spitsbergen are the subject of three expeditions of the University of Silesia in 2022, in the area of the Polish Polar Station over the Hornsund fjord (the first expedition at the end of winter, in April; the second expedition in summer; and the third expedition planned for autumn in mid September). A team consisting of: Michał Ciepły, PhD; Prof. Jacek Jania; Aleksandra Osika, MSc; and Dawid Saferna, MSc returned from the Arctic happily, with a lot of new data that will bring us closer to understanding how glaciers have evolved under the influence of global warming.

The weather conditions in Svalbard in summer were favorable to the field work, however, the air temperatures of +10 degrees C were high as for the arctic conditions, which accelerates the melting of the glaciers. A greater amount of stripping water flowing into the sea from the surface of glaciers reaches their bottom and accelerates the movement of ice masses. In addition, it stimulates the faster washing of ice cliffs by warmer sea waters. These processes lead to more intensive calving – the breaking away of icebergs. For a better understanding of the functioning of the marginal zone of glaciers, testing of modern automatic equipment for continuous monitoring of the flow rate of meltwater streams from the glacier bed – the surface water radar sensor OTT SVR 100 (purchased from the funds of the Research Excellence Initiative of the University of Silesia) – was started. 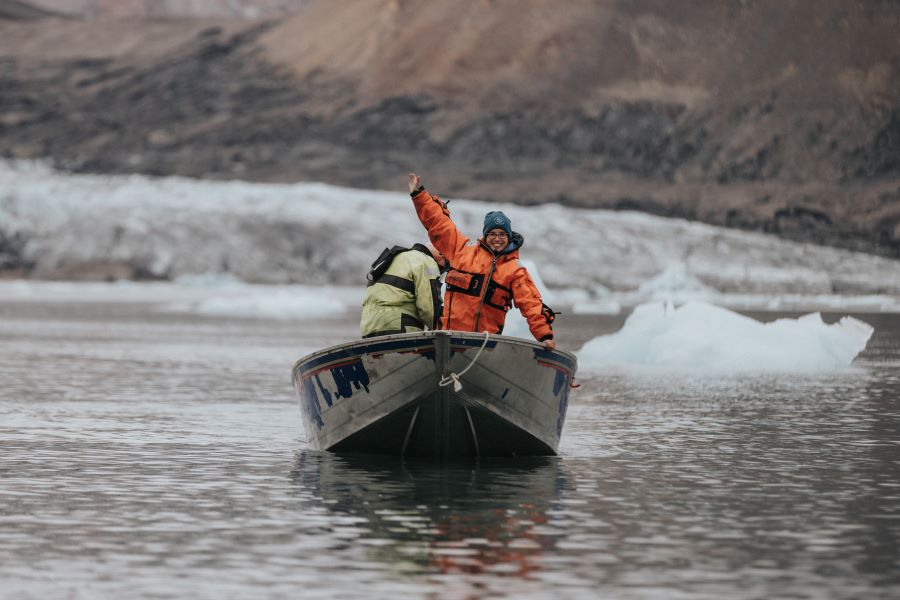 During the expedition, as a result of calving, an extremely intense reduction of the Hansbreen glacier range was found. It has been constantly monitored by researchers from the University of Silesia since 1982. The intensity of iceberg “production” was one of the highest in the history of observations using geodetic and photogrammetric methods, and in the last two decades also with the use of automatic photo cameras (photos every 3 hours). It was also found that three of the 14 glaciers that previously flowed into the waters of Hornsund Fjord have been found to have “retreated” to land, and another is close to losing contact with the sea. This means that the surface melting of the ice masses, combined with the greater loss of ice from calving, is leading to a dramatic transformation of the polar environment. Shorter range of glaciers means faster heating by the sun’s rays of more exposed rocks and the waters of their foreground, and thus – additional local warming of the climate, enhancing global change. These works were co-financed under the “Research Centres Visibility” competition within the Research Excellence Initiative and 2022 Small Projects of the Institute of Earth Sciences.

The prediction of further changes is based on the above-mentioned observations, but also on the recreation of the environment of the studied area in the recent geological past, covering the last approx. 11 thousand years (the Holocene), when periods warmer than today also occurred. This is the subject of research financed by the National Science Centre as part of the PRELUDIUM 20 competition, led by Aleksandra Osika, MA, PhD student at the International Environmental Doctoral School at the Centre for Polar Studies. The results of this year’s research confirmed that the Hans Glacier has experienced an episode of accelerated motion in the past, known as the charge. Until now, it was considered a “normal” glacier. New geomorphological evidence shows that this glacier also charged, probably in the 19th century, leaving characteristic relief forms, strongly obliterated by secondary fluvial and slope processes. It is important to understand the mechanism of the disappearance of the Svalbard glaciation in the warm period of the Holocene and today. The fast movement of the ice masses during the charge is due to the (insufficiently researched) conditions in the glacier bed, and the abundance of meltwater on the bottom, which reduces the friction of the ice masses against the rocks of the ground. So the higher the temperature, the chance of a charge increases (as long as the glacier has adequate ice resources). Then, paradoxically, it increases its range – advances. However, it calves more intensively and melts faster. This is followed by a calming phase with very slow motion and a predominance of surface melting. The following charges are milder. It can be said that the Arctic glaciers die in convulsions of charges.

These and other research projects were of particular importance, also as a reconnaissance carried out as part of the project “Interdisciplinary Polar Studies (IPS-2023) Modular Meeting: Arctic Amplification-Glaciers-Environment” led by Elżbieta Łepkowska, PhD. The project is financed by the Ministry of Science and Education, as part of the „Doskonała nauka” (Excellent Science) grant (DNK/SP/513817/2021). 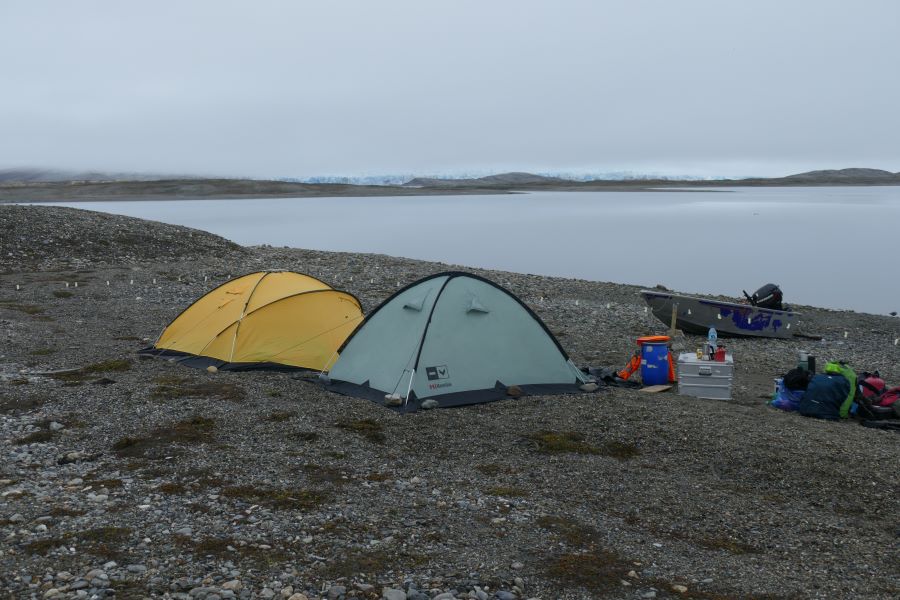 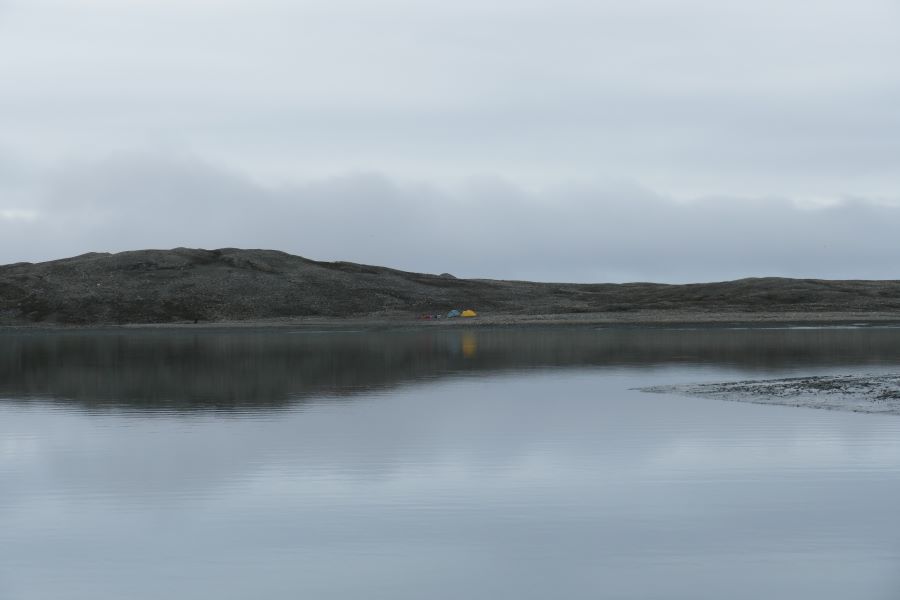 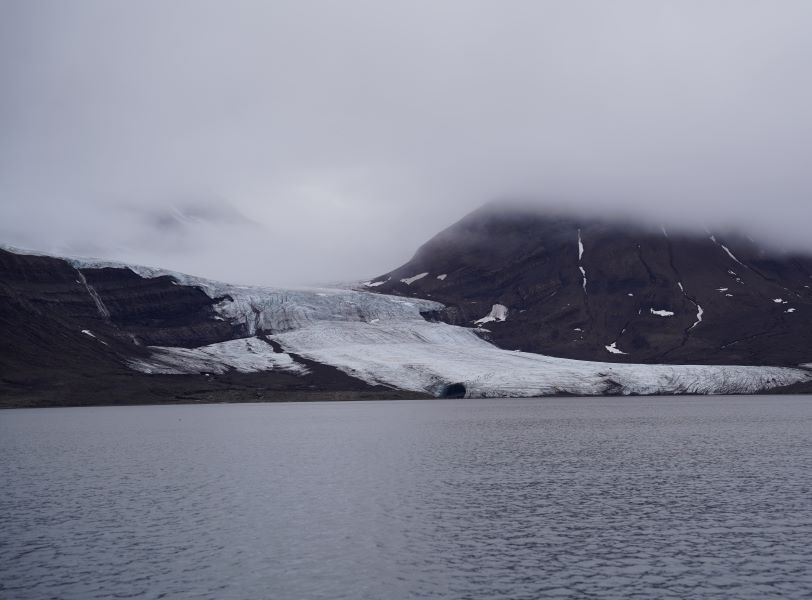 Hyrnebreen – one of the Hornsund glaciers that “retreated” to land due to global warming and intensive calving | Photo: Aleksandra Osika 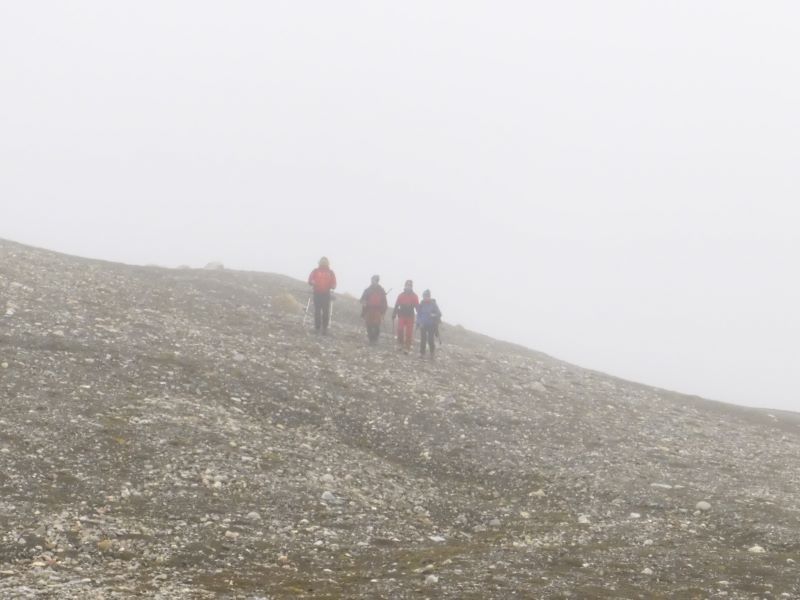 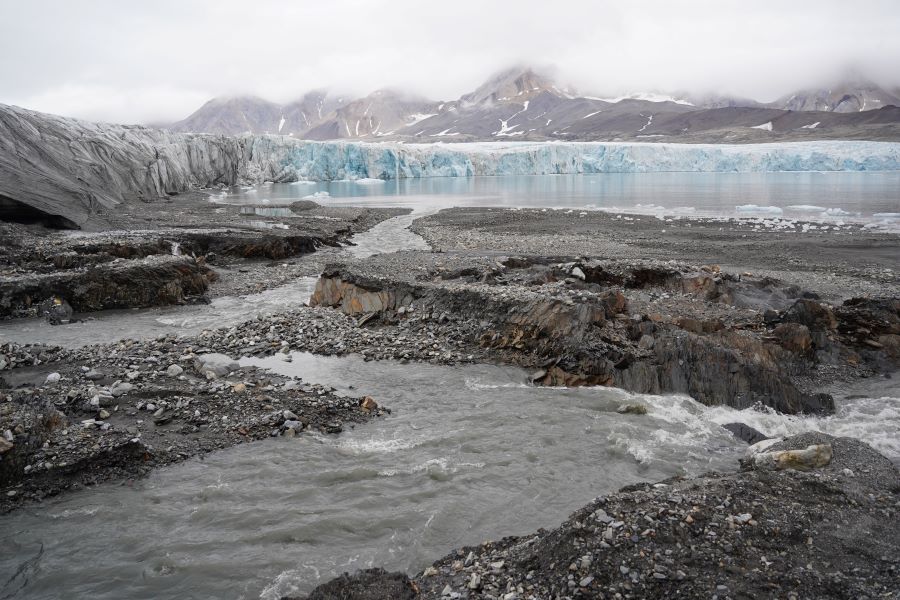