This site uses cookies
By using this website you agree to the use of cookies in accordance with the current browser settings.
Learn more Accept
Go to main content
COVID-19 security status
Level 0: no restrictions, basic health and safety at work rules
Coronavirus Statistics
home link Silesian research science and art Bittersweet life of the urban bee

Bittersweet life of the urban bee 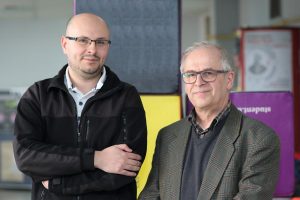 When several hives appeared on the campus of the University in August 2017, scientists asked themselves how the health of bees will be affected by heavy car traffic, limited access to food and air pollution. On the roof of the Faculty of Law and Administration, where wooden structures were placed, there are rather difficult conditions that insects have to face throughout the year. However, this was not the first urban apiary in Poland so scientists believed that the project could be successfully implemented. The originators of the creation of the apiary were doctoral student Łukasz Nicewicz and dr Agata Bednarek from the Faculty of Biology and Environmental Protection of the University of Silesia. The whole project is supervised by associate professor Mirosław Nakonieczny, the head of the Department of Animal Physiology and Ecotoxicology, and dr Alina Kafel working in this department.

For the needs of the project, a special variety of insects that were to collect pollen from honey plants found in nearby areas was selected. Ensuring fairly free access to food was one of the conditions for the success of this particular initiative. As the originators admitted, they were least afraid of interactions between humans and insects, because the apiary was located in a hard to reach place, minimising the risk of unwanted contacts, and thus possible stings.

‘Although they have been on the campus for over a year and a half, I think there are many students, and maybe also employees of the Faculty of Law and Administration, who do not even know that there are hives on the roof of the building. I want to add that there is relevant information at the entrance to the building. I have also not heard of cases where bees enter lecture halls. We thought the location over very well.’, says Łukasz Nicewicz MSc.

In addition, for the purpose of the scientific experiment, at the same time the second, traditional apiary was created in a rural space about 100 km from Katowice. Scientists are therefore observing the functioning of both swarms to compare how related swarms are coping in urban and rural environments.

The task of the biologists is not only to conduct research, but also to care for the apiary. ‘Łukasz Nicewicz MSc and dr Agata Bednarek are the ones who take care of the beehives. I only occasionally watch with interest how they work.’, says prof. Mirosław Nakonieczny. ‘We already know that urban families are reaching much larger numbers and that they produced twice as much honey last year.’

Care for the apiary is associated with great responsibility and consists primarily in monitoring whether anything about the bees is disturbing. For example, scientists have tools to control the size of the swarm. As Łukasz Nicewicz MSc explains, in the spring it’s necessary to add more wax slices to the hives, which limits the growth of the family. ‘Of course, bees can build such patches themselves, but if at some point they are born in too big numbers, they could cause trouble in the city.’, clarifies the doctoral student.

If the swarm was too large at some point, then some bees would probably decide to leave the university apiary and look for a new living space for themselves. Additional slices mean that the bees have something to do.

Monitoring the state of the apiary is also important due to the difficult weather conditions prevailing on the roof of the faculty building. It is primarily about high temperatures recorded during the summer. The doctoral student explains that the bees coped well with this challenge.

‘We have observed that insects engage many individuals to cool the nest, which settle at the beehive entrances and cause air movement, thus reducing the temperature inside. This is a very interesting and proven solution among bees.’, says the scientist. 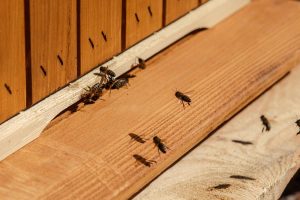 It is worth mentioning that there is a limited food base in the urban space. Care for green spaces, however, means that despite small green areas in the city, there is always something in bloom. For example, the Silesian Museum is planting honey plants programmatically, and scientists in direct conversations with the management only strengthened the legitimacy of such action.

‘We can say that our bees are intellectuals. They live next door with lawyers, and they fly to the Silesian Museum and the Silesian Library for pollen.’  professor Mirosław Nakonieczny comments.

It turned out that the insects had wide access to food, because many species of honey plants grow in the immediate area.

‘When we compared the amount of pollen and nectar accumulated in the beehives in Katowice to the one collected by their sisters in a traditional apiary, it turned out that urban bees were able to obtain almost twice as much food, and thus also produce more honey. It was a surprising discovery.’, admits Łukasz Nicewicz.

In this sense, rural rape and buckwheat fields lost to seemingly inconspicuous space in the centre of Katowice.

‘In early spring, we could enjoy the honey from the willows growing by the Rawa river. Later, bees produced honey from linden from the nearby parks with an admixture of catnip from the Silesian Museum. This particular linden honey had a very interesting, slightly herbal aftertaste. Finally, few could try honeydew honey.’, says the doctoral student.

Due to the fact that the apiary is located in a polluted urban environment, both honey and bee pollen have been tested for the presence of lead, cadmium, as well as microelements, namely zinc and copper. Tests for determination of polycyclic aromatic hydrocarbons (PAHs) are also planned. The results so far show that honey from university hives does not differ in purity from the traditional apiary product.

Scientists pay attention to other important aspects that affect the functioning of bees and show what a challenge to insects urban space can be. Łukasz Nicewicz, MSc admits that more research was conducted at that time than originally planned. Analyses using stress biomarkers have shown, among others, that university bees experience more factors considered stressful than insects living in the control apiary. This means that in the organisms of bees living on the University of Silesia campus more defense mechanisms are generated against DNA damage resulting, for example, from the presence of heavy metal ions in the environment.

‘In this case we deal with the phenomenon of compensation. On the one hand, we can talk about the phenomenon of multistress occurring in the city, which consists of many stressors, but working at a low level. While each of them, considered separately, does not have a significant impact on the functioning of a living organism, cumulative and long-standing (i.e. lifelong) do have a significant impact. On the other hand, there are aspects that compensate for this urban stress.’, explains professor Mirosław Nakonieczny.

Such compensatory factors may be: greater food availability and a smaller number of specialist predators hunting for bees.

The goal of subsequent research, which was conducted by dr Agata Bednarek was to check which individuals are better at finding food. In this case, it turned out that insects living in a traditional apiary excel. Scientists explain this result by more difficult and periodic access to honey plants in the countryside, as a result of which the bees must be more focused on searching. They also checked the ability to orientate in space and remember the path to the hive, and in this case bees living in the city turned out to be more proficient.

‘Let’s look at the spatial distribution of Katowice. It is a complex architecture full of many obstacles as seen from the perspective of small insects. Let’s imagine how many corridors and labyrinths they have to cross to reach, for example, the area of the Silesian Library… That’s how they improve their memory.’, says the doctoral student.

He adds that in the near future there will be conducted research to check whether stressors escalate in certain months. The results will allow to better plan the care of the university apiary. In the future, scientists also want to share knowledge and experience with other people who deal with urban apiaries or want to set them up.

Text from the April issue of Gazeta Uniwersytecka UŚ No. 7 (267).
Author: Małgorzata Kłosowicz