Tardigrades are often thought of as indestructible animals that are not threatened by very high or very low temperatures, long-lasting droughts or even exposure to cosmic radiation. But what is the secret behind this remarkable resilience, and is there really nothing that can harm them? These and some other questions are answered Assoc. Prof. Izabela Poprawa, Professor of the University of Silesia from the Faculty of Natural Sciences, who has been studying those unusual invertebrates for years.

“The tardigrades are affectionately called water bears. This term probably comes from their body shape and the way they move. When they move, they are quite clumsy and evoke a certain degree of sympathy,” says Prof. Izabela Poprawa.

“I think that many of you are familiar with their name. I remember how my friend’s son, while watching a cartoon, recognized “those little tardigrades of Aunt Iza’s”. They become characters in fairy tales and movies, and are available in the form of toys or prints on T-shirts. I have several tardigrade plushies in my collection, including one in the form of a tun, which I will tell you about later,” adds the biologist with a smile.

Tardigrades are the subject of many scientific investigations. It turns out that their body structure and unusual ability to survive in the most extreme conditions are of great interest.

“They weren’t always so popular. When I decided to continue my scientific journey at the University of Silesia, my supervisor, a wonderful man, Prof. Jerzy Klag, who invited me to join his team, suggested that I should research tardigrades. Research what? That was my first reaction. I had never heard about them before,” continues the biologist. 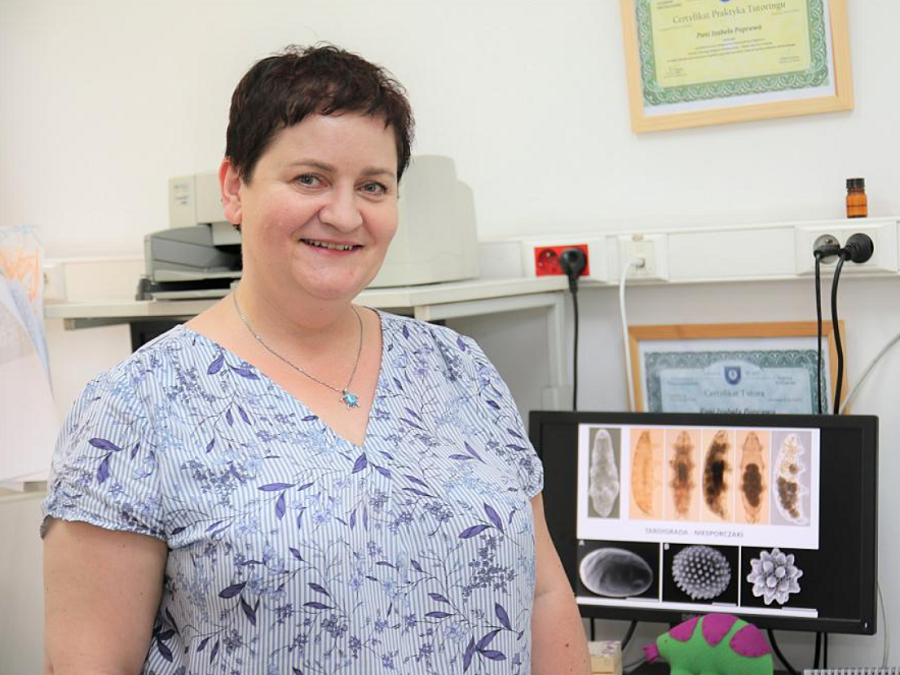 “You’ll see, you will definitely like it – he replied. It was very true. Since then I have been scientifically faithful to them. The first steps in the art of handling tardigrades I learned from Prof. Barbara Węglarska from Jagiellonian University, a master in the field. I decided to continue her work,” says Prof. Izabela Poprawa.

Every superhero has their weaknesses

It is true that tardigrades can withstand extreme environmental conditions very well. They can survive in temperatures close to absolute zero, i.e. -270°C, as well as in temperatures as high as 150°C. They have survived journeys into space. Although they prefer moist environments, such as mossy habitats, they can be found in subpolar regions as well as in a nearby sandpit or in the home garden. Can you see them with a bare eye? The biggest specimens are about 1.2 mm long, but these are rare. The vast majority of species are about 0.5 mm long.

Active animals are exposed to all the dangers that await other organisms on Earth, and there is no exception here. However, when something alarming happens, the body of the tardigrade goes into a state of cryptobiosis, or so-called latent life. Depending on the conditions, this can be, for example, a state of anhydrobiosis caused by insufficient water, cryobiosis – due to the temperature in the environment being too low, osmobiosis – due to a change in salinity, or anoxybiosis occurring as a result of insufficient oxygen.

As the researcher explains, in the state of anhydrobiosis metabolic processes are at such a low level that they are difficult to detect. Moreover, as a result of dehydration, tardigrades form a so-called tun. Their body shrinks, the evaporation area decreases, unnecessary water is removed from the body, etc. They do all of this to survive.

“We do not know how many years they can survive in this state, so far documented experimental research has shown that at least thirty years. And here we reach another paradox. Well, tardigrades are like sleeping beauties. Studies have shown that they do not age during the ongoing state of cryptobiosis. This means that if a forty-year-old human fell into such a state and woke up, let’s say, after a hundred years, his body would still be forty years old. No wonder the scientists want to learn the secrets of tardigrades,” explains Prof. Izabela Poprawa.

Although they are not threatened by extreme conditions, the latest research shows that tardigrades may be harmed by the effects of global warming.

In the state of cryptobiosis they can survive in a really harsh environment, but they may not acclimatise in time to slightly higher temperatures, which are nowadays increasingly becoming a norm. What is worth mentioning is that this study was conducted on only one species of tardigrades, which is of crucial importance, of course, but the results should – and do – give us something to think about”, says the scientist.

But what if a human were to gain the power of a tardigrade?

Tardigrades were first sent into space in 2007, in a state of anhydrobiosis.

“Most of them woke up upon their return, but among the four traveling species, Milnesium tardigradum proved to be the greatest superhero. Once re-hydrated, they resumed all basic life functions, including starting to reproduce”, the researcher says. The remarkable abilities of these small organisms fire people’s imagination.

“What if we were to travel to Mars, for example, in the state of cryptobiosis, not experiencing any negative effects of the long journey, not aging?” asks the biologist.

“These thoughts are as of now obviously a fantasy, but since there are organisms on Earth that have certain capabilities, it means that some solutions that interest us are not alien to nature,” she adds.

Of course, there is still a long way to go to discover all the secrets of tardigrades. Scientists have discovered several proteins and other substances responsible for, for example, protecting the DNA of these invertebrates from damage as a result of various extreme conditions or affecting the process of water crystallization in the body, which is particularly important in the state of cryobiosis when water, changing its state, could tear apart the cells of their tiny bodies.

The research shows that there is an abundance of solutions, and that they are specific to each species. The better or worse adaptation to harsh conditions is also determined by the developmental stage of the individual. This topic is one of the main scientific interests of Prof. Izabela Poprawa. The research is conducted in cooperation with a team of scientists from Adam Mickiewicz University in Poznań.

The researchers investigate, among other things, at which stage of development in certain species of tardigrades the survival rate of anhydrobiosis is the highest. This is an experimental research. First, selected specimens are dried, then rehydrated and observed, recording all relevant parameters. In the next stage, there are plans for genetic studies.

“My main interest also lies in the reproductive system of tardigrades, which is of great importance in taxonomy and phylogeny,” says Prof. Izabela Poprawa.

“They fall somewhere between arthropods and onychophoras. That is why I am looking for features that will allow us to better understand their classification. Modern equipment helps us in this process. Thanks to advanced technologies, we can reconstruct a three-dimensional image of individual components of the reproductive system and then compare it to reconstructed parts of the organisms of the two sister types of interest. These results are very impressive to the scientific world and bring us closer to a better understanding of invertebrates,” explains the researcher.

The unwavering popularity of tardigrades also attracts young scientists who want to take a closer look at them.

“At the moment my PhD student Kamil Janelt is analyzing the encestation process, which is a poorly understood form of a response to environmental changes. This is an important topic. I am glad that there are people who, like me, fell in love with these small, clumsy bears,” concludes Prof. Izabela Poprawa.